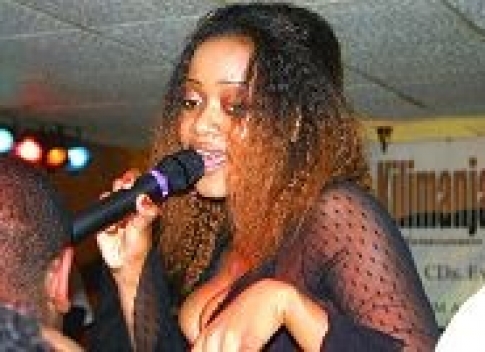 Tanzania’s Taarab and Bongo Flava star, Ray C, was in the Twin Cities on Thanksgiving Day eve and her sex appeal overpowered the men in the room.

Most men who could not understand the lyrics (she sang mostly in Swahili) spent their time throwing dollar bills at her and making attempts to touch her repeatedly in colorful enjoyment. Since they didn’t overstep, bouncers were forgiving as Taarab music lovers typically make their way toward the singer and give him or her money in appreciation for the music and lyrics. Obviously for many of those giving the money, her beauty more than made up fro the lyrics they could not understand.

For those who understood the lyrics however, it was a joy to have her in town. She was on a US tour and a Minnesota stop was not on the itinerary, but a last minute development in the tour calendar enabled Kilimanjaro Entertainment in collaboration with Shina Inc. and G & G Enterprises to bring her to the Twin Cities. She performed tracks from her current and second album, Na Wewe Milele (Forever With you).

Taarab Music is a fusion of Swahili tunes sang in rhythmic poem spiced with Arabic or at times Indian melodies and is very popular in Tanzania and the coast of Kenya. Ray C combined Taarab and the current music sensation hitting Tanzania, Bongo Flava. Bongo in Swahili means brain. However in the contextualized Swahili in the capital of Tanzania, Dar es Salaam it means highly fashionable and urbanized. The Flava (flavor) they are giving is the Bongo.

Bongo Flava is now synonymous with the music genre dominant in urban Tanzania which is a hip-hop sound sang mostly in Swahili. In some parts of Tanzania, they call it “glocalized” hip-hop. The likes of Ray C represents a new generation of Tanzania artistes who have added spice to the local music scene. Demand for their music has spurred the growth of the recording industry in the country. Before, artists had to travel to Nairobi in Kenya to record but can now do so in Dar es Salaam.

Ladies in the audience were also beneficiaries of the love messages coming from Ray C. In the dark congested floor, their partners repeated Ray C’s lyrics to them to the delight of the women. One woman, probably with a rekindled romance, yelled “Asante Ray C (Thank you Ray C). Many Taarab songs are usually love songs and are sung at events such as weddings.

Not only can she sing but can also belly dance and has on a belly ring to draw attention to that area of the anatomy. Many say her belly dancing skills have no equal in Tanzania and possibly the whole of East Africa. Last June she won the "Best Female Artist of the Year in Uganda and Tanzania" award at the 4th Kisima Music Awards in Nairobi, Kenya.