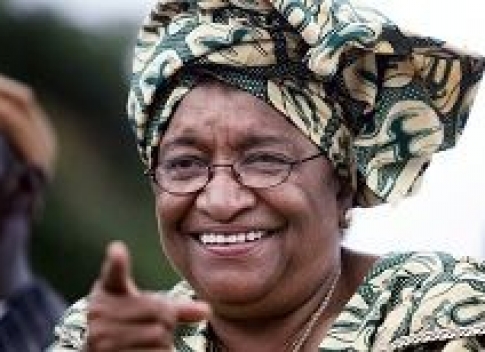 Liberian voters have become the first Africans to elect a female head of state. Liberians on November 8 elected Harvard-educated economist and former World Bank official, Ellen Johnson-Sirleaf to be president of that country.

Africa . It’s a big challenge but I’m looking forward to it.” The divorced mother of four sons studied accounts and economics first at the

Wisconsin between 1961 and 1964. Before becoming a civil servant in , she also read economics at

University between 1969 and 1971. Ellen and her husband were divorced before he died some years later.

Mr. Weah immediately after the results were announced cried foul claiming the election was a fraud and submitted a formal complaint to the Supreme Court, which is still investigating. International observers said that while there were some minor irregularities, they were too small to change the outcome.

Mr. Weah’s supporters aired their feelings of betrayal with three days of protest, with one protest of more than 1,500 people marching up a main thoroughfare to the embassy in the heavily militarized Mamba Point area.

Mr. Weah, speaking to a crowd of supporters at his campaign headquarters, appealed for calm, but hundreds of supporters wielding branches marched through the streets in protest, chanting, “No Weah, no peace!”

They threw stones at police officers in front of the National Elections Commission, and United Nations peacekeepers fired tear gas to keep protesters from storming the United States Embassy, according to reporters in . Heavy tanks and armored personnel from the United Nations patrolled

Monrovia streets after the elections to calm down tensions.

Mr. Weah, whose base was the young, discontented population who idolized him for his exploits on the soccer field and his rags-to-riches life story, was seen as a favorite because young voters make up 40 percent of the electorate.

But the women’s vote appears to have been stronger. There were slightly more women registered to vote in , and while there were no reliable surveys of voters leaving the polls, women appeared to be a strong presence.

Political strategy played a role as well. In the final weeks of the campaign, Ms. Johnson-Sirleaf formed crucial alliances with parties whose candidates had lost in the first round, which winnowed the field of 22 presidential contenders to 2.

The 66-year-old grandmother and former finance minister had 59.4 percent of the votes while the 39-yearold former FIFA player of the year George Weah had 40.6 percent, the National Elections Commission said. Voter turnout was 59.3 percent from 2,978 of the 3,070 polling stations.

Although international observers were unanimous in their observation that the election was free, fair and transparent, Weah claimed that the polls were marred by fraud and took up the case with the Supreme Court, seeking a rite of prohibition on the electoral commission.

Weah had alleged that more than 35 pre-marked ballot papers intended to be stuffed in ballot boxes in favor of his challenger Johnson-Sirleaf, were intercepted by his supporter and has presented photo copy of same to the electoral commission as evidence to prove his claims.

Mrs. Sirleaf declared victory shortly after the results were announced but following Mr. Weah’s complaint, the investigation, and the timeline to release results in accordance with Liberian electoral law, prompted a warning from NEC chairwoman Frances Johnson Morris against premature celebrations by supporters of the Harvard educated economist. “Madame Sirleaf has no right to declare herself the winner,” she told reporters. “Only the NEC does.”

The electoral commission officially announced her as the winner on November 23. With all the votes counted, the Election Commission said the former banker pulled nearly 60 percent of the Nov. 8 run-off votes compared to the 41 percent of former soccer star, George Oppong Weah. The commission said she received 478, 526 votes while Mr. Weah got 327, 046. Top officials from Mr. Weah’s party have said they will take their case to the Supreme Court if an electoral commission, which is still investigating, finds no evidence of fraud. The election was organized and its security guaranteed by a UN peacekeeping force.

Ms. Johnson-Sirleaf’s victory propels her into an old boys’ club unlike any other. From the Cape to Cairo , from Dar es Salaam to

Dakar , men have dominated African politics from the earliest days of the anti colonial struggle.

“There are so many capable women,” said Yassine Fall, a Senegalese economist and feminist working on women’s rights in

Africa . “But they just don’t get the chance to lead.”

Indeed, when supporters of Ms. Johnson-Sirleaf, 66, a onetime United Nations official and Liberian finance minister, marched through the streets of

Monrovia in the final, frantic days of the campaign for ’s presidency, they shouted and waved signs that read, “Ellen – she’s our man.”

So far, only three women have been head of state in

Africa . None was elected. Ruth Perry was appointed chair of the Liberian Council of State in September 1996 after the overthrow of dictator Samuel Doe. Sylvie Kinigi acted as president in following the murder of President Melchior Ndadaye in October 1993 and Carmen Pereira acted as head of state in for two days in May 1984.

But in recent years, African women have gained power and visibility. In 2004 a Kenyan environmentalist, Wangari Muta Maathai, won the Nobel Peace Prize, while ’s finance minister and feared corruption fighter, Ngozi Okonjo-Iweala, has emerged as one of that country’s most respected officials.

Women have also made gains at the ballot box. The prime minister of , Luísa Dias Diogo, is widely seen as a likely future president. In , there is a greater proportion of women serving in Parliament than in any other nation; they occupy nearly half the seats.

Africa leads the developing world in the percentage of women in legislative positions, at about 16 percent, according to the Inter-Parliamentary Union , an organization of parliamentary bodies worldwide.

’s presidential election came two years after the nation emerged from a brutal civil war that claimed more than 250,000 lives and displaced a third of the population. Pushed from power by rebels, Charles Taylor, the warlord who became ’s president and fomented bloody wars that racked the region for more than a decade, went into exile in 2003 and is now in .

The issues Johnson-Sirleaf will have to contend with are reconciliation among Liberians and reconstruction of basic social services such as schools, health care facilities, roads, safe drinking water, electricity as well as reintegrating thousands of excombatants and the creation of job opportunities.

Illiteracy rate in the West African state, blessed with diamond, gold, timber, iron ore and rubber as well as fertile soil, stands at about 85 percent and unemployment is put at 80 percent. The country also owes an external debt around 3 billion dollars.

Most Liberians were quoted by media as believing a free poll in their war-ravaged country would have been impossible without the UN presence.

The head of the UN mission says the task at hand now is reconciliation and reconstruction.

Johnson-Sirleaf’s inauguration on Jan. 16 will make her one of Africa ’s longest serving political opposition leaders that will have finally come to power, along the likes of Nelson Mandela of , Abdulaye Wade of and Laurent Gbagbo of .