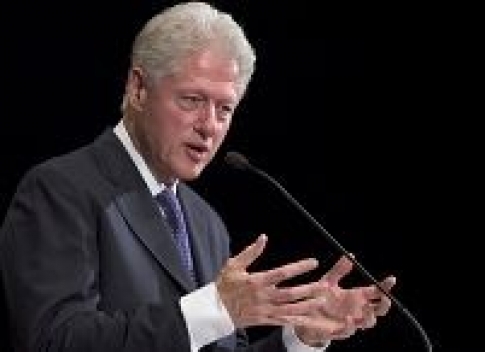 Former President Bill Clinton told of an experience he had in to illustrate the strategies the can take to combat terrorism. He talked of a Ghanaian woman who ran after him to hand him a shirt as a present to thank the former president for his African Growth and Opportunity Act (AGOA) that provided economic opportunities for her. Mr. Clinton signed into law the AGOA Act in his final year of office.

Northrop auditorium during the Humphrey Institute for Public Affairs’ Distinguished Carlson Lecture Series. The former president was the invited speaker during the series’25th anniversary celebration on Saturaday, November 5.

Mr. Clinton told the audience of about 5,000 that after he left office, he visited to work on economic development projects with the new president. When he was headed for

his plane, the woman ran after him shouting ‘President Clinton, don’t

go, don’t go!’ And she’s waving a package at me. So I turned around and went back and shook hands with her.

And she says, ‘Because of that
Africa
trade bill you signed, I am one of 400 women in our community that have jobs making shirts. We can support our children, and our children are in

school. It’s wonderful. So here’s your shirt.’ “And I thought, ‘what the heck, I’m not president anymore.’ I took the shirt.” the president said amid laughter.

Mr. Clinton who remains popular in Africa in retirement as he was while in office said he keeps the shirt he received from the woman in a place “near my closet where I look at it and I see someone who knows we are not her enemies”. The president added that the AGOA didn’t cost very much money and “It’s a lot cheaper than fighting a war.” he said.

Mr. Clinton said the AGOA act enabled the Ghanaian woman to live a much better life even though her standard of living may not reach those of Americans. “It is what we say may

used to be our version of living the American dream”. He said America cannot expect to rid the world of all its enemies and it is wise to have more friends than enemies. Creating economic opportunities such as what AGOA is doing is one of a variety of policies that the United States can pursue. He warned that the Israeli withdrawal from Gaza may in fact create a situation where a lack of economic opportunities may lead to disillusionment and eventual unrest.

To further illustrate how doing good will benefit America, he gave the example of the US humanitarian efforts during the Asian Tsunami. Mr. Clinton said Osama bin Laden’s

approval ratings prior to the tsunami was 58% and 36% for America but after the massive humanitarian assistance the Americans gave, “Ours (approval ratings) was 60% and 28%

for Osama”, the former president said. He said the reason the tsunami victims responded positively to Americans was because “we related to them as human beings” and not in geopolitical terms.  He added that the response has been the same lately in Pakistan with the earthquake that hit that country.

The Clinton speech was free but tickets had to be obtained and the Dean of the Humphrey Institute, J. Brian Atwood, caused laughter prior to the president speaking when he said Mr. Clinton remains so popular that students slept in sleeping bags overnight to ensure they got tickets.

thought I would come and say hi’, causing even more laughter, but in a serious note said with the extensive secret service protocol, things were running a bit behind but that the program will start in twenty minutes and apologized for the delay. Ten minutes later David Bruininks, the university president came to the podium to welcome everyone and kick off the program.

during the Clinton administration, a fact that Mr. Clinton acknowledged and praised him for.

President Clinton’s speech touched on a variety of global and domestic issues and the work of his Clinton foundation. He assailed President Bush without mentioning his name for fighting a war while cutting taxes, something that has never been done in the history of this country as everyone

is expected to sacrifice to support the war effort. He also said the United States is better off being part of international organizations than being on the outside. On other domestic policy issues, he said the United States should encourage minorities especially Black Americans and women to enter the sciences. He said these two groups are more than enough to satisfy the demand for future scientists.

Former vice-president Walter Mondale who introduced Mr. Clinton called him one of the most important public thinkers and communicators of our time and wondered why the constitution limits presidents to two terms as Clinton “is just what we need” drawing the loudest applause of the

The former president also urged all to get involved in their communities to improve them and not to get discouraged by short term outcomes of elections.

The Chairman and CEO of the Carlson companies, Marilyn Carlson Nelson, which sponsors the lecture series, also gave brief remarks at the end giving a brief history of how her late father gave birth to the idea of the distinguished lecture series when the climate back then was not conducive to its start.