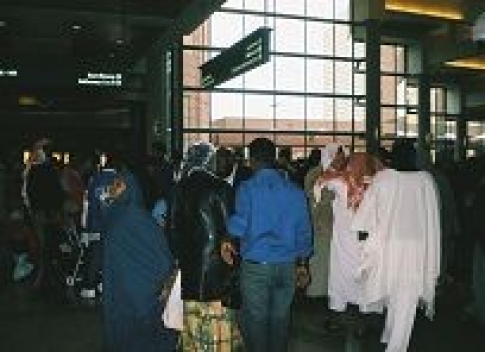 Minnesota Muslims on Thursday November 3 joined an estimated 1.2 billion Muslims across the globe in celebrations to mark the end of the month-long fast of Ramadhan. Muslim men and women clad in Islamic regalia were visible in many mosques and designated prayer centers celebrating EID-EL-FITR by prayers, feasting and religious sermons.

Minnesota Muslims numbering about 100,000 according to estimates of the Islamic Institute of Minnesota were seen in a happy festive mood exchanging goodwill greetings of “EID-MUBARAK.” Highlights of the celebrations included morning prayers, giving to charity (Zakkat fitr) to the less privileged in their communities, renewing their commitment to belief in one God and extending a hand of friendship to friends, neighbors, the sick and those in need by being philanthropic.

Traditionally, EID-EL-FIT being an annual event involves bigger congregations than those that are experienced on the weekly Friday prayers in mosques, thus special designated sites are selected to accommodate the big gatherings. The main prayer sites in
Minnesota
were

the
Minneapolis
Convention Center
in the city of Minneapolis where thousands of Muslims held their morning prayers; and at the Higher Ground Academy

in the city of
St. Paul
. Yet other prayers were held in assorted mosques across the state.

today has some 650 mosques in total. After the morning prayers, the Abubakar As-Saddique Islamic Center of Minneapolis organized religious feasts for men at The Abubakar

Islamic Center where people gathered and enjoyed halal (lawful) food and soft drinks. At Masjid Shafie, women assembled for the EID festivities while children programs were held at Brian Coyle with food, drinks and fanfare. In all these centers food and refreshments (non-alcoholic) were

served to Muslims and their invited guests. Other festivities went on in private homes.

The Imam who led prayers at the

called on Muslims to maintain the good righteous deeds that fasting Muslims upheld during Ramadhan for the next eleven months without going astray before another term of fasting. He said while Muslims were fasting, they were very generous in giving charity to the  poor, the disabled, orphans, visitors, travelers, widows and other neglected communities in our society.

The Imam said that good deeds should not end with Ramadhan. The discipline, self control and kindness that people felt for others during the fasting month should remain a permanent feature for believing Muslims in their daily lives. He said husbands should be nice to their wives, parents should show love to their children and people-to- people relations should be based on respect and unconditional love. He said people have been called by God to remain righteous so that they may save their souls from hell fire.

Ramadhan is the ninth month of the Muslim calendar and it is during this month that the Holy Quran was revealed to Prophet Muhamad – (SAW) – (May the Peace of Allah be upon him) through Arch-Angel Gabriel (Gibril). Fasting entails refraining from worldly desires such

as taking food, drink, sex, abstaining from using foul language, refraining from oppressing others and staying away from all hedonistic flesh desires from sunrise to sunset. After sunset, fasting Muslims take light meals for ending the day’s fast. At night, married couples are free to engage in

matrimonial relations but they are not allowed to do so during daytime.

According to the Islamic Society of North America, fasting started on October 4, and ended after sunset on November 2, this being a leap month of 30 days; there are periods when thelunar moon during Ramadhan comes out only after 29 days).

At the Marina Grill and Deli in
Minneapolis
where Adel Hegazi and Saker Elsaied served Middle Eastern dishes, Muslims gathered to break their fast every evening. These business owners have the experience of 25 years in similar businesses in Cairo and . Their menu included grilled lamb, stuffed grape leaves, kofta kebabs, felafel and buffet cuisine.

Brother Elsaied said the business was good and not only did he help his customers by providing good service, he also made good money too. He intends to keep his buffet going even beyond Ramadhan as some people fast an extra six days within the lunar month of Shawal that follows the end of Ramadhan.

The Quran, the Islamic Holy book was revealed to Prophet Muhammad during this month and has given the religion five pillars as the articles of faith. The first pillar is the shahada,the affirmation that “There is no God but Allah” and that Prophet Muhamad is his Prophet and messenger. The second pillar is performing salat – prayers performed five times a day facing Mecca (Alkaaba – the niche of Islam). The third pillar is payment of zakat (tax charged at 2.5 % of annual income). The fourth pillar is Swaum– fasting during Ramadhan. The fifth pillar is pilgrimage to Mecca for those with the financial means and physical capability.

groups, – shedding their outer garments and settling for a plain white shroudlike dress – a symbol of equality and humility before God. They supplicate to Allah (God) who has promised paradise

for the practicing believers and hell fire for non-believers.

About two thirds of all Muslims in the United States are immigrants and their descendants. Muslim immigrants first landed in America in the 1880, the first groups coming from Syria,

Lebanon, Jordan, and Palestine. Muslim communities began to form in the industrial Midwest Toledo, Cedar Rapids, Detroit, Michigan City, and Chicago. The extended families of these

immigrants became the founders of the first mosques in North America.

The next big wave of Muslim immigrants was between 1947 and 1960 mainly from the Middle East as well as India, Pakistan, Eastern Europe, and the former Soviet Union. The last wave

of immigrants who came mainly as refugees or for economic reasons were from Yemen, Lebanon, Egypt, Jordan, Turkistan-Turkey, Kuwait, Saudi Arabia, Iraq, and Afghanistan. Most

One of the largest and most highly organized Islamic association in America is the Muslim Student Association (MSA) formed in 1963. Other service and professional organizations sprung from it such as American Muslim Social Scientists, Muslim Youth of North America, Islamic Medical Association and several others under the umbrella of the Islamic Society of North America (ISNA).

In America, Elijah Muhammad (at times being falsely referred to as prophet) tried to create a unique version of Islam and his activities were carried forward by his son Warith Deen Muhammad. But then their new outlook of Islam was disapproved by Malcolm X -one of the earlier activists -who after going for his pilgrimage to Mecca discovered the true universal

Islam. The general trend today in America is for Muslims to return to the universal religion of Islam as propounded by the Holy Quran and the traditions of Prophet Muhamad (SAW).

forward the fragmented remains of the controversial so-called Nation of Islam.

Most African slaves who were shipped to America from West Africa were from Muslim background, but after arriving in America under their white slave-masters were led to abandon

their faith, many of them were baptized and given new Christian (European) names. Today, some African-Americans tend to be going back to the religion of their forefathers of Islam.

following Christianity by the year 2015. EID-EL-FITR unites all Muslims globally in a common celebration that is devoid of alcohol, use of drugs, pork and all unlawful habits such as gamblingand hedonistic relations outside marriage.