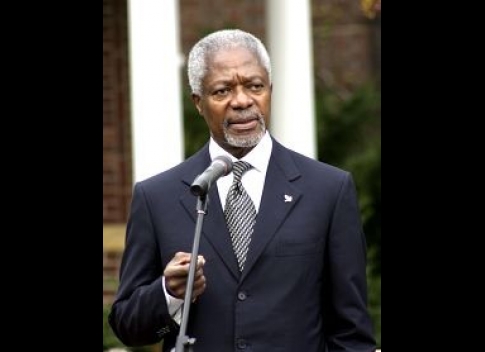 United Nations Secretary-General, Kofi Annan has cited the war in Iraq as his greatest disappointment during his tenure at the helm of the world body. Mr. Annan was speaking at Macalester College in Saint Paul, Minnesota  when he addressed the convocation ceremony to launch the college’s new Institute for Global Citizenship. The Secretary-General graduated from the college in 1961.

"It was a very painful experience for me, personally, because I thought we should have been able to avoid the war," he said at the College’s Filed House where the convocation was held. He said the division preceding the war and the ensuing destructive debates made that period his greatest disappointment as Secretary-General. He will have served two terms for ten years when he retires at the end of this year. He is the seventh person to occupy the post.

He praised Macalester College for its formation of the new institute and recalled how even in 1959 when he first came to the college, the spirit of internationalism and global outlook was very much present.

“Its launch could hardly come at a more crucial time in the life of the international community in general, and the United Nations in particular. More than ever before, the human race faces global problems – from poverty and inequality to nuclear proliferation, from climate change to bird flu, from terrorism to HIV/AIDS, from ethnic cleansing and genocide to trafficking in the lives and bodies of human beings. We need to come together and work out global solutions,” he told the packed Filed House gymnasium. About 2,000 students and guests attended the convocation.

With the advent of globalization, Mr. Annan said now more than ever is important to understand other cultures. He said those going through the institute will help dispel some myths about America, “the perception of an insular America with no interest in or understanding of the world beyond these shores,” he said.

He reminded the audience that the UN consists “of your government and mine” and not to view it as some autonomous body that functions independent of the world community. He said calls for the UN to stop the Iraq war do not make sense because “we didn’t start it so we can’t stop it”; he said but added that the world body is working jointly with the rest of the world to bring peace to the region as the world cannot afford a destabilized Iraq.

He told the friendly and admiring crowd “I hope you will always look to the United Nations as a forum in which Americans, along with all the world’s other peoples, can work together for freedom, prosperity and peace.”

Mr. Annan started his day at Macalester by raising a new UN flag at the school which the college’s president, Brian Rosenberg said was a demonstration of the school’s commitment to internationalism. Five students from the college’s UN Model Club, Sheena Paul, Jess Hasken, Paul Bisca, Henrik Hakonsen and Momcil Jelev assisted him in the flag raising. A bag pipe player preceded the event. As the flag reached the top just under the US flag, the sun immediately cut through the cloudy morning.

Among the friendly faces there to hear Mr. Annan speak was Macalester sophomore, Kalii Massey of Peoria, Illinois. She said seeing Mr. Annan speaking was worth giving up a Saturday morning, “I have never heard him speak and the fact that Macalester is known around the world because of him is really great”, she said.

To start the convocation ceremony, students carrying their countries’ flags marched behind the bagpipe players. Prayers at the convocation were said in four world languages by students, Korean, Slovakian, English and Kofi Annan’s own native Ga by Edinam Agbenyeke.

Mr. Annan also held a press conference at Macalester. Answering questions, he defended the UN against what he called “politically motivated and orchestrated” campaigns against the world body. He was referring to among others the oil for food program in which the UN personnel were accused of corruption. Minnesota US Senator Norm Coleman as chair of the senate investigations subcommittee even called for Mr. Annan’s resignation in 2004.

Mr. Annan was asked at the press conference what his relationship is like with Senator Coleman to which he responded “I can’t say we have a relationship,” an indication that the differences are yet to be resolved. He said he has very good relationships with former Vice-president, Walter Mondale who is from Minnesota and the late Senator Paul Wellstone adding that “This is a state that produces outstanding politicians and senators”, when he referred to the two.

While admitting a few UN staffers may have benefited from the oil for food program, he asked the journalists to keep things in perspective, reminding them that out of the US$65 billion program, UN staffers are accused of having benefited to the tune of $150,000. He said that did not rise to the level of branding the UN as a den of thieves. Most of the blame he said should go to the private companies that manipulated the program.

Responding to a question from Mshale, Mr. Annan said the United States gets blamed for many things but it should not be blamed for the failure of the UN to expand to eight the number of permanent security council members. He said that the inability to achieve the expansion is due to differences among member countries. He however said the current composition of the five permanent Security Council members does not reflect the geopolitical realties of the present world. He described it as a “democracy deficit”.

The Institute for Global Citizenship will be under the leadership of Dean Ahmed I. Samatar, who Mr. Annan quipped during a student question and answer session at Field House, could decide whether he (Mr. Annan) comes to teach at Macalester as a visiting lecturer. He was responding to a question from a student about his post retirement plans. Mr. Samatar, a native of Somalia, is the Dean of International Studies and Programming at Macalester.

Also at Macalester, Mr. Annan attended an invitation only luncheon hosted by the Caux Round Table, an international network of business and political leaders advocating an ethical approach to capitalism. The organization awarded him its 2006 Award for Principled Leadership. Also attending the luncheon was Saint Paul mayor, Chris Coleman, who issued a proclamation declaring the day (April 22, 2006) as Kofi Annan Day in his city. The mayor, whose city has a big population of Hmong immigrants told Mr. Annan he will be seeking his help in pushing for an investigation into reports of Hmong graves desecration taking place at a refugee camp in Thailand.

Mayor Coleman, who is not related to Senator Norm Coleman jokingly made sure he reminded the Secretary-general that point. Senator Coleman is also a former Saint Paul mayor.

After concluding his visit to Macalester, Mr. Annan made his way across the Mississippi river on I-94, under heavy security by the Minnesota State Patrol and his security detail to the Walker Art Center. The State Department’s Diplomatic Security Service (DSS) is responsible for the UN Secretary General’s security while within the borders of the United States.

At the Walker, he was given a private tour by Director Kathy Halbreich.

Visit the Picture Gallery at Mshale.com for more images from Mr. Annan’s visit.