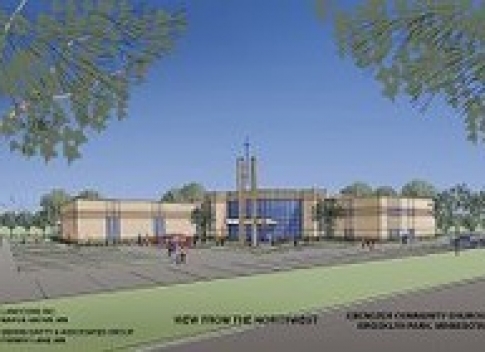 Liberians from many parts of the Twin Cities joined the congregation of Ebenezer Community Church and broke ground for the construction of a $5M church edifice.

The program took place on Sunday, June 4th on a 4.3 acre land located at 9200 West Broadway, Brooklyn Park, Minnesota. It brought together many dignitaries and Liberians from all walks of life. It is one of the biggest projects undertaken by an African immigrant community in this region.

When completed, the building will be 33,264 feet. It will house the sanctuary, a multipurpose gym/fellowship hall, classrooms and offices. Rev. Francis O.S. Tabla, founding Pastor of Ebenezer is the man behind the project.

In a statement, Rev. Tabla said “when the building is constructed, we will be able to expand our evangelistic outreach by providing ministries that are culturally sensitive.” Some of the programs the church expects to provide once the building is complete are an adult literacy program to cater especially to those who because of civil wars had to drop out for school. An after school and tutorial program will also be one of the ministries housed at the new building in addition to a day care.

Rev. Tabla continued: “It (the edifice) will also provide a sense of stability for our congregation. We have moved four times in five years due to our rapid growth.”

Rev. Dr. Leo A. Endel, Executive Director of the Minnesota-Wisconsin Baptist Convention, delivered the sermon. He preached on the theme: “Shout to the Lord!” His text was taken from Ezra 3:10-13. He commended Rev. Tabla and his congregation for being focused.

The President of the Organization of Liberians in Minnesota, Martha Sinoe, praised Rev. Tabla and his congregation for taking on such a historic project. She said “This is the first time in Minnesota’s history that a ground breaking ceremony is being held to construct a church in the Liberian community.”

The predominantly Liberian congregation has seen rapid growth forcing it move five times. It currently holds its services at Park Center High school in Brooklyn Center. According to church officials, they have raised over $75,000 from within the congregation towards the project. By this summer the goal is to raise $500,000 with 50% of the target coming from the congregation itself.

The young congregation’s history starts in 2000 when Rev. Tabla and his wife Christine,  were contemplating retuning to Liberia after completion of graduate studies at the Samuel DeWitt Proctor School of Theology, Virginia Union University, had their “hearts moved by God” and were called to start ministering to the over 20,000 Liberians in Minnesota. The then Senior Pastor of Pilgrim Baptist Church in Saint Paul, Rev. Robert L. Stephens, was the first to embrace the young congregation and allowed it to hold worship services at the historic church. Pilgrim Baptist Church is the oldest African American church in Minnesota having been established by freed salves in 1863. Shortly thereafter Ebenezer moved to locations closer to the community it was trying to serve in the Twin Cities’ northwest suburbs.

According to records they have made public, the 4.3 acres of land in the fast growing section of Brooklyn Park cost $745,000. Member pledges for the first phase of the project which was the land purchase amounted to $218,000.  First Baptist Church in Richmond, Virginia, Where the Tablas were members before moving to Minnesota gave a gift of $50,000 towards the land purchase.

The architect chosen for the project is The Dennis Batty & Associates Group out of Minneapolis.

To get in touch with Ebenezer Community Church, you can call 763-561-2100 or visit them on the web at www. ebenezercommunitychurch.com