Home Features Powered Out Of Work 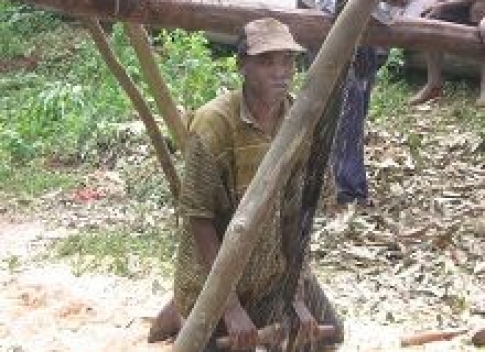 Mshale West Coast Correspondent, Edwin Okong’o, was in Kenya recently as a Human Rights Center summer fellow. He filed this report about the extinction of the timber harvesting skill of the Gusii people in western Kenya.

NYAMIRA, Kenya – If he had his way, Samuel G.M. Kimonge would be in the forest, away from his home. He wouldn’t sit all day chatting and arguing with people, most of whom are decades his junior, like he has been doing for over a year and a half.

Kimonge, a 53-year-old widower, wakes up in the morning, does a few chores around the house and heads to Makairo, his home shopping center located in the Gusii region of southwestern Kenya.  At the main intersection of the shopping center, several men sit outside a butchery and restaurant. Most of them can barely afford anything. The shopping center has more than twenty buildings, but because people here buy very little, less than half of the rusty tin roof buildings are open for business.

Kimonge is one of a many men in the Gusii region who possess a timber harvesting skill that is slowly being driven to extinction by mechanization. The men, who made a living by manually harvesting timber, have become jobless because of the introduction of the power saw.

“We have driven them out of work,” says Maati Orang’o, who has owned a power saw since 2001.

Compared to the power saw, the traditional timber harvesting method is slow. Using axes, men spend up to five hours felling a tree. They then cut it into logs, which they raise horizontally some feet above the ground to start the process. With one man standing on the horizontal log and the other on his knees below, they start working using a giant saw. Following lines drawn according to the size of timber required, they start the tedious work. It can take up to a week to get timber out of one log.

Orang’o, on the other had, is able to do in a day what it takes manual timber harvesters up to two weeks. He can produce up to 100 per day. He also earns an average of $50 a day—an income more than Kimonge made in a month when he had work.

Orang’o’s chainsaw has also another advantage. He can perform his work without moving logs far from where the tree falls. Manual lumberjacks have to move logs to flat ground or level an area to make their workspace. In the Gusii area which has steep hills, this can take numerous hours.

“More people are abandoning the old way for the new,” Orang’o says.

Orang’o admits that timber produced manually is superior to the type he turns out.

“Carpenters spend a lot of time smoothening timber that’s done by the power saw,” he says.

“But many people are willing to trade quality for quantity.”

Kimonge says that although men with his skill have lost their only source of income, the loss to the community is even greater.

“We have lost a social gathering place,” he says.

That’s just what a timber producing place was for Makairo. It was the equivalent of a barber shop in the United States. Men of all ages gathered there, told jokes, exchanged ideas and even cooked. They often joked that no woman was strong enough to cook for timber harvesters, but the real reason is that so many men came to the place and preferred to cook for themselves.

The lumberjack’s workplace was a safe place to gather and talk about anything unlike the main intersection at Makairo, where men now gather for the same function. Sometime police and the area chief show up unannounced and harass them.

During the days of the manual saw, young boys also got a chance to learn how to make timber, a skill Kimonge says is bound to die.

“Boys his age will never learn the skill,” he says pointing at a boy of about 10.

There are only a handful of people in Makairo and its adjacent villages who have this skill. Before the emergence of the power saw, they were self-employed. Because they do not belong to any labor organization, and are poorly educated, it has been very hard to protest the new way of harvesting timber. Switching to power saws is not an option for such men, for none of them can raise the more than $700 it takes to buy one.

“Can’t even afford a pair of shoes,” Kimonge says, looking down at his bare feet. During the good days, Kimonge could be heard singing in sync with the saw. The songs were mostly spur-of-the-moment, humorous and educational. The scene is different where Orang’o works.

On one bright July morning as Orang’o takes a break to change his saw’s chain, a man of about fifty begins to tell a story. He is teasing youngsters about their low tolerance of alcohol.

“You boys get rowdy after only two beers,” he says as the youngsters protest.

The man talks about drinking until 4a.m and still being able to rescue a cow that was being washed away by a river.  As he begins to explain, the power saw comes to life. Its deafening noise is unbearable. The men step back to escape the strong smell of petrol, emitted from the saw’s engine. After watching Orang’o work for a few minutes, they disperse. Some return to the intersection where they find other men engaged in an argument on who they should elect to represent tea farmers at their factory’s board of directors. As usual, Kimonge is there, immersed deep in the conversation.

“This is the only place I find solace,” he says after the discussion.