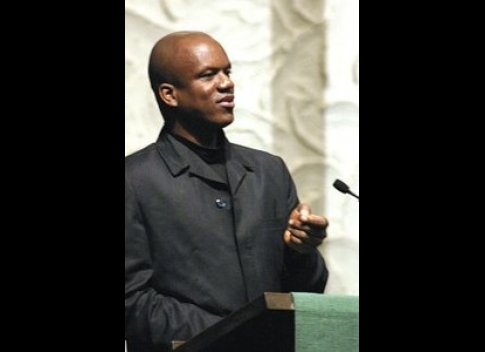 It was Sunday, November 19, 2006. Liberians from all walks of life assembled for a Town Hall Meeting at the Brooklyn United Methodist Church in Brooklyn Center, Minnesota. The purpose of the meeting was two-fold to listen to the Chairman of the Liberia Truth & Reconciliation Commission, Cllr. Jerome J. Verdier and to pose questions about atrocities committed by “freedom fighters” (perpetrator) during the civil war.

Welcoming Liberians and guests at the meeting, the President of the Organization of Liberians in Minnesota (OLM), Mrs. Martha Tala Sinoe, noted that reconciliation is important and that Liberians should keep an open mind because the process is long.

Mrs. Sinoe said the occasion was “a great milestone in the struggle of Liberian people worldwide.” She said she was impressed when she held with Cllr. Verdier Thursday evening prior to the meeting. She said the Commission did not make a mistake to elect Cllr. Jerome Verdier as Chairman of the TRC.”

The OLM President commended the Minnesota Advocate of Human Rights for the crucial role the organization is playing in Minnesota.

Speaking on behalf of the Minnesota Advocate for Human Rights, the Deputy Director, Mrs. Jennifer Prestholdt, noted that in order to create an accurate record of what happened in Liberia, the truth must be told. She said her organization would make recommendations to the Liberian government.

Addressing Liberians and guests at the Town Hall Meeting, the Chairman of the Truth and Reconciliation Commission (TRC), the soft-spoken Cllr. Jerome J. Verdier, said “Liberians should take part in the reconciliation process and sit and talk with each other.”

Cllr. Verdier, who holds Bachelor degrees in Business Administration from the University of Liberia and a Bachelor of Laws from the Louis Arthur Grimes School of Law, stressed that “the TRC is not a court and cannot persecute perpetrators in the Liberian civil conflict.”

Cllr. Verdier said that after two years, the TRC would be dissolved and emphasized that it is the TRC’s responsibilities to ensure that the Government of Liberia implements the Commission’s recommendations.

He said the TRC was launched simultaneously in all 15 counties in Liberia and that his Commission has employed 192 statement takers.

The Chairman said his Commission has been mandated to “investigate and document human rights abuses which occurred in Liberia from 1979 to 2003.”

Many Liberians at the meeting told their stories about their relatives and friends who were killed during the war. They asked whether the perpetrators would be persecuted. Cllr. Verdier said his Commission would recommend some perpetrators for prosecution. He made it clear that the TRC is not a court. The TRC was inaugurated last February in Liberia by president Ellen Johnson-Sirleaf and formally began its work in June. It is charged with investigating and documentring  crimes that occurred during that country’s 14-year civil war.

In the United States, the Minnesota Advocates for Human rights is handling the taking of statements from victims and perpetrators.