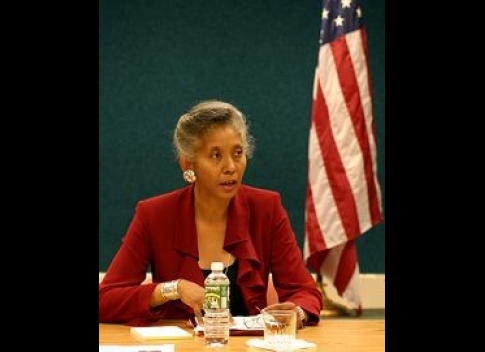 Ambassador Cindy Courville is capping more than 20 years of involvement with African issues with a challenging assignment as the first U.S. envoy to the African Union (AU), headquartered in Addis Ababa, Ethiopia.

Courville’s brother, Ronald, and husband, Edward, stood beside her as the new ambassador pledged to "support and defend the Constitution of the United States," the oath that all U.S. government officials take before assuming public office.

Courville was President Bush’s top Africa adviser on the NSC before being named to the new diplomatic posting. Before that, she taught political science at several universities and served for a number of years as an Africa analyst for the Defense Intelligence Agency.

Rice, who attended the University of Denver with Courville, called the new

ambassador "the ideal candidate" to represent America to the increasingly

important AU, lately called upon to furnish peacekeeping troops to crisis areas such as Darfur in Sudan.

Courville’s knowledge and understanding of conflict issues, as well as the

continent’s development needs, are a good match for the ongoing spirit of

said. And since "the AU has been one of our very important partners…," she

said, "the evolution of that relationship takes a natural turn today with the

Darfur," Rice said. And Courville will be a key participant, she added, "as we

continue to work together to build strong strategic relationships throughout the continent."

Courville said, "It is the African ambassadors, that corps, who supported me

also, and I hope will continue to be part of the American-African dream to build upon that partnership and build upon the promise of freedom and prosperity that President Bush sees on the continent."

To the AU representatives, she said: "I look forward to being on the continent.

I look forward to the challenges — and I know they are going to be tough. But I