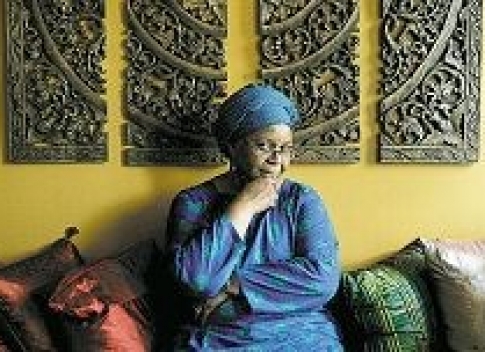 Islam is growing fast among African Americans, who are undeterred by increased scrutiny of Muslims in the United States since the September 11 attacks, according to imams and experts.
Converts within the black community say they are attracted to the disciplines of prayer, the emphasis within Islam on submission to God and the religion’s affinity with people who are oppressed.
Some blacks are also suspicious of U.S. government warnings about the emergence of new enemies since the 2001 attacks because of memories of how the establishment demonized civil rights leaders Martin Luther King and Malcolm X.
As a result, they are willing to view Islam as a legitimate alternative to Christianity, the majority religion among U.S. blacks.
"It is one of the fastest-growing religions in America," said Lawrence Mamiya, professor of religion at Vassar College, speaking of Islam among black Americans.
He said there were up to 2 million black U.S. Muslims but acknowledged there are no precise figures.
"It’s not viewed (by authorities) as a threat because the numbers are small and once we get past the war on terror and all the negative images then it will continue to spread."
Black Americans typically attend mosques separate from Muslims from immigrant backgrounds despite sharing common beliefs, according to Aminah McCloud, religious studies professor at DePaul University in Chicago.
But imams in Atlanta, a U.S. center for black Muslims, said they were subjected to less scrutiny than Muslims from the Middle East and Indian sub-continent.
RAP BROWN’S MOSQUE
Many blacks converted during the civil rights era, when Malcolm X helped popularize the Nation of Islam, attracting boxer Muhammad Ali among others. Islam still attracts prominent blacks such as rapper Scarface, a recent convert.
But the Nation of Islam has declined as a force at the expense of an association of mosques led by Warith Deen Muhammad, the son of Nation of Islam leader Elijah Muhammad, who died in 1975.
At a street-corner mosque in one of Atlanta’s oldest and poorest neighborhoods, a recent Friday sermon illustrated the power of the history of Islam in the United States for blacks.
Men and women sat separately on the mosque floor, heads covered, as cleric Nadim Ali recounted stories from history of Muslim slaves brought from Africa who struggled to uphold their faith in the face of slaveholders’ opposition.
If Muslims could remain true to Islam under slavery, the audience should follow their example, Ali said at the Community Masjid of Atlanta in the city’s West End district.
“You are talking about a people who were cut off from their roots …. Islam reconnects you with Africa and with other parts of the world so your peoplehood transcends race," Ali said later in an interview.
The mosque has a direct link to a slice of black history. It was founded by H. Rap Brown, a one-time member of the 1960s Black Panthers group. Brown became a Muslim in prison in the 1970s and changed his name to Jamil al-Amin.
He was convicted for killing a sheriff’s deputy in Georgia in March 2000 and is serving a sentence of life without parole, but in his absence the mosque has continued what Ali said was the low-profile work of building a local Muslim community.
CONVERSION
The mosque teaches there was no distinction between Sunni and Shi’ite within Islam, according to people who attend regularly. Sermons urged Muslims to find work, stay free from crime and drugs and maintain stable family lives.
Ali said he assumed the mosque was bugged and infiltrated by informers, in part because its leaders remained skeptical about U.S. policies since September 11.
"They (the government) unplug black people and plug in Arabs or Muslims. They unplug Arabs and plug in communists. America needs war to maintain its economic status," he said.
The larger Masjid of al-Islam mosque in another mainly black neighborhood of Atlanta is part of Warith Deen Muhammad’s group. Its imam, Plemon el-Amin, said he was involved with local interfaith work as well as with a local Islamic school.
One recent Friday, Mark King, a new convert, and hundreds of others at the mosque listened to a preacher urge Muslims to seek God through the Koran. Followers of other faiths should seek God through their own holy books, the preacher said.
King, who wears his hair in dreadlocks, converted after visiting Africa for the first time and in Gambia read the Koran and realized its teaching chimed with his own beliefs, not least in fighting injustice.
"For young African Americans, there is some attraction to learning about traditions that have been associated with resistance to European imperialism," said King, who has adopted the name Bilal Mansa since his conversion.