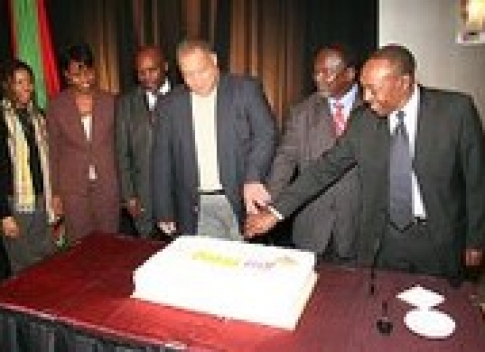 BALTIMORE, Maryland – The Postal Corporation of Kenya yesterday officially launched PostaPay, its money transfer service, for Kenyans overseas at a ceremony officiated by the Kenyan ambassador to the United States, Mr. Peter Nicholas Rateng’ Oginga Ogego, at a local hotel. The service is being offered through a partnership with Afripayments LLC, a US based company that is also part owner of Nairobi based Afripayments Kenya Ltd. The Kenyan entity is a joint venture between Afripayments LLC and a group of Kenyan investors, according to Ms. Caroline Kurgat, Afripayments Manager for International Business Development when she spoke with Mshale moments after the launch.

With the launch, the scene is set for a PostaPay head to head competition with the two leading MTOs (Money transfer Operators) that dominate the money transfer business into Kenya. Kenyans overseas sent an estimated 50 Billion Kenya Shillings (about $US 1 billion) last year. The PostaPay service is the successor to the former Post Bank that was for long the main agent for Western Union until last year. The partnership with the former Post Bank gave Western Union access to the most expansive network of agent outlets in Kenya. The country is one of the top recipients in Africa of inflows from its nationals abroad.

A high powered delegation from PostaPay headquarters in Nairobi led by the Postal Corporation of Kenya chairman, Major general (Rtd.) Peter Kariuki and the CEO and Postmaster general Mr. Fred Odhiambo were on hand for the launch. Mr. Kariuki admitted to his corporation’s surprise at the enthusiasm that has greeted the arrival of PostaPay during brief remarks at the launch. Mr. Odhiambo on his part thanked Afripayments for seeing value in a partnership with PostaPay. “The country is hungry for new investments,” Mr. Odhiambo said. With over 200 outlets throughout Kenya, he told launch attendees that the number of outlets will soon double. In the meantime, he said the focus is on automation, ramping up customer service and associated training as well as branding. During a brief interview after the launch he revealed his short term goal is to grab 10% share of the remittances coming into Kenya from the Diaspora.

The Afripayments US President and CEO, Dwayne Johnson, in brief remarks welcoming launch attendees said his corporation was fully committed to the partnership with the Postal Corporation of Kenya.

Ms. Kurgat during a PowerPoint presentation that was one of the highlights of launch activities to introduce the service said unlike its competitors, Afripayments supports what she called individual and institutional funds transfer whereby Diaspora Kenyans can send funds directly to places such as schools when paying tuition for relatives or those they are supporting. “We consider this a killer attribute”, she said as she meticulously walked the audience through her presentation. She said the company has formed strategic partnerships with corporations such as PayQuick and RIA that are active around the globe in the money transfer business. PayQuick provides the technology that many in the money transfer business utilize.

She said customers have the option of sending money either through the PostaPay website or by placing a toll free call to the call center that is located in Kenya. An enthusiastic Dr. Nyanchama described that as reason enough to use the service “since it (Afripayments) has provided employment opportunities”. He described the coming of Afripayments as a wake-up call for him. “Someone has been eating our lunch,” he exclaimed from the podium in reference to the millions that non-Kenyan money transfer companies have made over the years.

Invited guests read like the who is who of Kenyans in North America. Among those present included Ms. Jean Adero of the Association of Kenyan Professionals in Atlanta (AKPA), Ms. Mkawasi Mcharo, president of the Kenyan Community Abroad (KCA) and the KCA founding president Dr. Matunda Nyanchama of Toronto. Dr. Nyanchama served as the master of ceremonies for the launch celebration. The Kenyan American business community was also represented at the launch with some described as potential PostaPay agents by Afripayments’ VP for Sales and Marketing, Mr. Edwin Nyambeche.

One of the Kenyan American business people attending was prominent Minneapolis realtor, Ms. Eunice Chege, who told Mshale she always has an eye open for new business opportunities which is why I am here”, she said. She however challenged the Afripayments team to take it “to the next level” by introducing debit cards or even venturing beyond Kenya.

Mr. Joshua Mochache, an aerospace engineer from Dallas, said the service appeals to his patriotism. ‘Even if the other competitors drop their rates as they have been doing, I still feel Afripayments is the way to go – its like GM (General Motors) says in that Chevy truck ad of theirs my country my truck,” he said. Mr. Mochache said he was in Kenya when the service first launched and believes the venture is grounded in “sound business principles”.

Ms. Mcharo said Kenyans abroad expect “good things” with the coming of the PostaPay service as she is a believer in competition as it “makes everyone better”.

The guest of honor, Ambassador Ogego before declaring the service officially launched told the audience that the embassy is an ally to the Kenyan community in the US and was available to provide assistance to Kenyans here that want to invest back home. The ambassador who headed straight to the launch from the airport from a visit to Kenya said Kenyans and other potential investors will find a receptive partner at the embassy.

A Delaware comedy group provided laughs for the otherwise serious group of community leaders and business guests sketching the life of a Kenyan coming to America.

Meanwhile, PostaPay and Mshale newspaper are this year’s national tour sponsors of the popular Kenyan comedy group, Redykyulass, during their annual US tour starting in July. Minneapolis based Kilimanjaro Entertainment will once again be hosting and organizing the popular group during their tour. Kilimanjaro’s CEO, Mr. George Ndege expressed his pleasure during the launch at having PostaPay be first time sponsors. He said the group will be visiting ten US cities.