Home Sports Before The Williams Sisters, There Was Althea Gibson 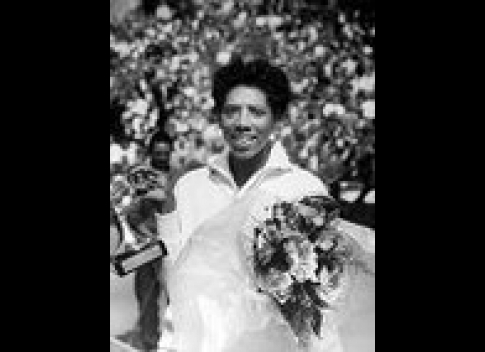 On the court, Althea Gibson was smooth and her game effortless, but off the court she battled many obstacles to become the first African-American to break tennis’ color barrier, 50 years ago.

Fifty years ago, in the late summer of 1957, Althea Gibson made history as she captured the U.S. National Championships title on the grass courts of Forest Hills. With that win, the 30-year-old Gibson became the first African-American¬ – male or female ¬to win that most prestigious Grand Slam tennis tournament crown.

Just three years after the great Jackie Robinson had broken the color barrier in baseball, Gibson broke tennis’ color barrier when she played in the 1950 U.S. Championships. Until then, tennis had been a segregated sport, with blacks playing on their own tour – similar to the Negro Baseball Leagues – under the auspices of the American Tennis Association. Her participation at Forest Hills that year was facilitated, in part, by Alice Marble, one of the top players of that era, who wrote an editorial in a national magazine calling for the sport to allow her to compete.

That she did. Tall and lean, Gibson’s look and her game resembled that of the elder Williams sister. “Very graceful, very smooth,” says former tennis star, now U.S. Fed Cup captain Zina Garrison, who befriended Gibson in the legend’s later years and became a confidante. “She glided around the court. When you look at Venus [Williams], Althea was very much like her.”

Six years after her Grand Slam debut, well before the tide of civil rights began to rise throughout America, Gibson made history once again – this time in magnificent fashion by winning the 1956 French Open to become the first black to win a Grand Slam event. The next year, she won Wimbledon and the U.S. Championships, then successfully defended both titles the following year. Gibson teamed with Angela Buxton, a Jewish player from Briton, to win the 1956 doubles championships at the French and Wimbledon. Both women experienced discrimination by their fellow players, but after their triumph at the All-England tennis club, a British newspaper touted: “Minorities Win.”

All told, Gibson, the daughter of South Carolina sharecroppers, won five Grand Slam singles titles and six Grand Slam doubles crowns, but her impact on tennis ¬and society cannot be measured in mere trophy counts. She was a trailblazer of remarkable heart and courage, marking a path for those who would follow her, carrying herself with that special grace and dignity known only to true champions.

“Althea made tennis a better place, by opening doors and opening minds,” said USTA president and chairman Jane Brown Grimes. “For that, all of us owe Althea Gibson a debt of gratitude.”

In recognition of Gibson’s myriad contributions to the sport of tennis and to society at large, the U.S. Tennis Association this year hosted a very special tribute to the late champion, who passed away in 2003 following a long illness. On an extraordinary evening of history and emotion, African-American women who are pioneers in their own fields, and the elite from the world of tennis, gathered to honor and celebrate one of their own. Call her tennis’ own Jackie Robinson.

The event, entitled “Breaking Barriers,” was held on the opening night of the 2007 U.S. Open at the USTA Billie Jean King National Tennis Center in Queens, N.Y. It commemorated the 50th anniversary of Gibson’s pioneering triumph at the 1957 U.S. National Championships (now known as the U.S. Open), and also provided a stage for Gibson’s induction into the prestigious U.S. Open Court of Champions. But the evening proved to be so much more – an acknowledgement of the oversight of having never before recognized Gibson as a barrier-breaking pioneer, and a unique first-time celebration of the historic firsts achieved by other prominent African-American women.

Billie Jean King, whose own pioneering efforts on behalf of female athletes were celebrated at this venue last year, was part of the tribute, as was New York City mayor Michael Bloomberg and Rachel Robinson, Jackie Robinson’s widow. Aretha Franklin, the first black woman inducted into the Rock & Roll Hall of Fame, performed at the tribute.

“Althea Gibson dreamed the impossible and made it possible,” said Johnson, who was a BET founder. “She was one of the first African-American women in sports to say, ‘Why not me?’ She empowered generations [of black women] to believe in themselves, emboldened us to achieve and attain the unattainable. Her drive, spirit and passion continue to set an example for us today.”

“I will always be grateful to her for having the strength and the courage to triumph in extreme adversity,” said Venus Williams, a six-time Grand Slam singles champion, who also participated in the tribute. “Her accomplishments set the stage for my success, and through players like me, Serena and many others to come, her legacy will live on.”

Roy S. Johnson is the editor-in-chief of Men’s Fitness and an adjunct professor at the City University of New York Graduate School of Journalism. Johnson is a self-described child of the civil rights movement.