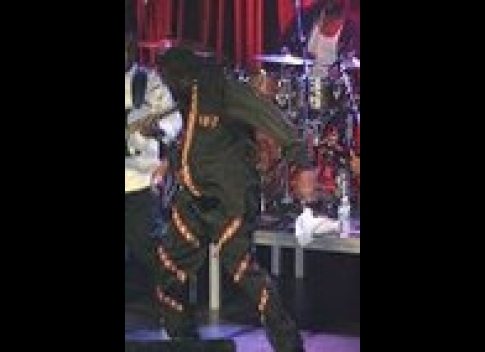 MINNEAPOLIS, Minn — On an oversized screen, bigger than a pair of king-sized beds, a “Tom & Jerry” cartoon plays.  The crowd is waiting for the opening bands to start their sets.  As usual Tom is chasing Jerry and Jerry’s sidekick, Tuffy.  The two mice are scrounging for food.  The camera pans to a dinner table laden with a feast, entering on the left side of the scene, comes a maid.  In cartoon fashion, she’s dressed as a stereotypical Blackie, billowy bosom, ruffled apron, massive paws instead of hands and dark as the inker can make her.  Of course she has no face.

The concert venue, First Avenue, in Minneapolis on August 20th waiting along with over 1,000 people, the majority of them of African descent, for Reggae sensation, Lucky Dube.  As I stare at the violence in the cartoon, I wonder who else might be considering it disrespectful to Lucky, who sings about peace.

When Lucky finally takes the stage an hour later I see a big man with a big smile.  I hear him deliver a powerful message.  “We can disagree on a lot of things, but as long as we have respect, it is good,” he tells the audience.  Something tells me this man has a big heart that’s willing to forgive the arrogant ignorance portrayed in a 1940s cartoon.

Born in South Africa in 1964 to a single mother, living in poverty under Apartheid, restrained by Group Area Acts and Pass Laws of the day, Lucky faced many obstacles.  At the age of 18, though not yet graduated from high school or fluent in English, he ventured into the world of professional music.  In the beginning, Lucky’s music followed traditional Zulu music known as Mbaqanga. This influential genre of music blends up-tempo rhythms with social commentary, making it a likely lead into the reggae that Lucky eventually embraced.

Reggae song lyrics, as is true of most music, explore topics such as faith, love, relationships, poverty, and injustice.  According to Lucky’s website, his songs emphasize three main tenets “political, social and personal issues.”  Reggae music provided a natural platform for Lucky to espouse his views, based on his tumultuous childhood as well as his optimistic vision for the future.

Lucky’s appearance at First Avenue was the grand finale of Afrifest, a weekend-long African showcase of music, craft, food, and culture. Rachel Lee Joyce, a member of Afrifest Executive Committee, describes the First Avenue show as “the crown jewel of Afrifest.”

“He is the top-selling artist in South Africa and it is rare for a first-year festival to attract that level of talent,” Joyce says.

On the dance floor, we are crowded together like rush-hour subway passengers.  The center of the mass undulates as one with the effect lessening as one moves to the edges of the circle.  Despite the lack of personal space, everyone seems happy.
Lucky sings number after number, his trio of dancers, who look as though they were pulled straight out of the Soweto Gospel Choir’s line-up, are shaking their hips and chorusing his words.  His band of two guitarists and two sets of keyboards and an expansive drum set backs him.  The ecstatic crowd stands, several rows deep, with their illuminated cell phones waving like beacons.  Flashing cameras punctuate the darkness in the audience.

The evening is a long one. Two warm up bands take stage before Lucky begins at 10:30p.m.  A lone woman serves up plates of jerk chicken, BBQ ribs, jollof rice, and other ethnic treats.

When Lucky sings one of his hits, “Respect,” he tells the story of how the song was snatched up by pirates and hocked over the internet before he had a chance to release his album.  But instead of pirates, Lucky called them slave drivers.  “One does the work, the other reaps the profits,” Lucky explains.  But he’s not bitter about this.  The lyrics of the song inform the audience of the true nature of Lucky’s heart.  “Give love to those who give me war, I love those who hate me, I bless even those who curse me,” he sings.

“Lucky’s commitment to justice, liberation, and unity amongst all world citizens has inspired people around the globe while uplifting the spirits of his countrymen,” says Afrifest organizer, Joyce.  “The joy that radiates from his spirit when he performs is exactly what we wanted to share through Afrifest.”