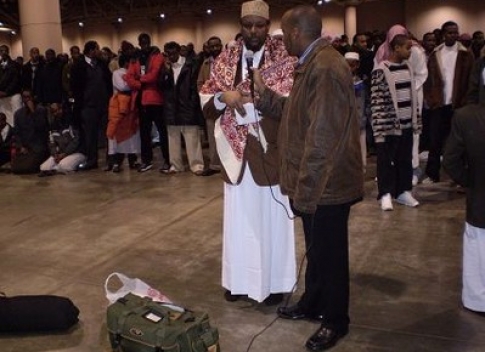 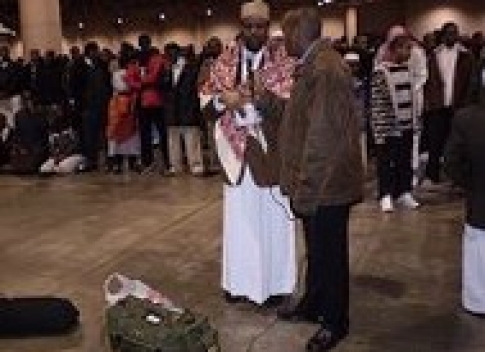 The Islamic holiday celebrates Prophet Abraham’s faith and his obeying of Allah’s command to sacrifice his only son.

MINNEAPOLIS – Minnesota Muslims took part in early morning congregational prayers on Dec. 19 to celebrate Eid-el-hajj, which takes place in Islamic communities on the 10th day of Dhul-Hijjah, the last month of the Islamic calendar.

It is otherwise referred to as Eid-ul-Adha (celebration of sacrifice) as it has its origins on the act of Prophet Abraham obeying God’s command to sacrifice his son Ismail. When Abraham had shown all intentions of doing so, God in his infinite mercy provided a lamb as sacrifice thus saving Ismail’s life.

The Eid-el-hajj occasion this year saw over two million Muslims from all over the world making the journey to Mecca and Medina in Saudi Arabia to perform religious rituals pertaining to pilgrimage, and those who did not make it congregated in large assemblies to perform the Eid prayers. It is a celebration that involves the slaughter of an animal for every Muslim family to share the meat with neighbors, the needy and family members.

The largest single congregation of Muslims in Minnesota took place at the Minneapolis Convention Center, where Sheikh Abdulrahman Omar, Imam of the Abubakar Saddique Islamic Center, appealed to all Muslims to reflect the Hajj spirit of brotherhood, fraternity, love and service to humanity.

Hajj is the “climax of the individual’s spiritual life centered on the unity of the Muslim umma (world) as one body based on a brotherhood in the faith that transcends narrow considerations of race, nationality, color and ethnicity,” he said.

The Imam men to strive to be good husbands and fathers to their wives and children and women should strive to be good wives to their husbands and good mothers to their children through teaching them piety and worship of Allah. He called upon Muslims to support the efforts of the Abubakar Islamic Center in propagating the teachings of Islam and building capacity through payment of zakkat (Islamic tax) and charity to enable the Muslims to help those in need.

The Hajj (pilgrimage) is the Fifth Pillar of Islam that required all physically fit Muslims and blessed with finances to make the trip to Mecca and other Islamic holy shrines in Saudi Arabia at least once in a lifetime.

Muslims all over the world, clad in their most attractive attire, join those who have made it to Mecca in festivities and celebrations thanking Allah for all blessings received. They do so by visiting friends and family, the sick, praying for the departed loved-ones, and by offering meat portions to the needy along with other gifts.

When Muslims slaughter animals in the name of God during this “celebration of sacrifice”, the Qur’an warns against false beliefs that God is in need of the meat and blood of the slaughtered animals. In Chapter Hajj 22:37 God clarifies the purpose of sacrifice in the following words: “It is neither their meat nor their blood that reaches Allah, but it is piety (taqwaa) from you that reaches Him.”