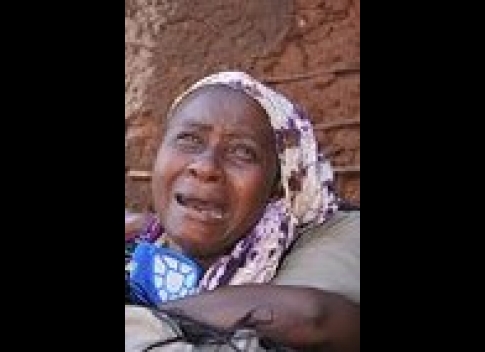 The handshake, which took place at the steps of Kibaki’s office in Harambee House, Nairobi, was interpreted by many as a magical one, lit a ray of hope for the crisis rocking Kenya.

The two leaders emerged from a face-to-face meeting brokered by former United Nations chief Koffi Annan, and extended the first gesture of reconciliation since their Dec. 27 election dispute drove Kenya into widespread riots and ethnic violence.
Both Odinga and Kibaki, who read from prepared speeches and cued off in Kiswahili in words when they met echoed the same message of peace and willingness to negotiate.

“I said in the past that I am always ready to walk the extra mile for the sake of this nation,” said Odinga. “My party and I are prepared to take this long journey. My team and I will spare no effort to seek to resolve the problems facing the country.”

Kibaki took the same cue and expressed concern for loss of life and destruction of property. Kibaki, who also noted in his speech that he was “duly elected” the President, said he was committed to dialogue and reconciliation.

“As the Government we are determined to lead the country in a process of healing and harmony,” Kibaki said.

Analysts were quick to point out that the move was a breakthrough in a bitter standoff between the two leaders that was triggered by allegations of Kibaki’s rigging of the Dec. 27 presidential election.

But on the night of Jan. 24, barely 48 hours after the “golden handshake,” terrifying mobs of young men armed with machetes, clubs and bows and arrows stormed through the streets of Nakuru, a city two and a half hours’ drive from Nairobi.  The aftermath left twenty-three people killed, prompting Provincial Commissioner Hassan Noor to impose a 7 p.m to 6 a.m curfew.

By the end of the weekend, more than 100 people had been killed in the city, bringing the death toll across the country to nearly 800 people. Nearly 300,000 people have been displaced since the beginning of the violence. The ethnic violence, which has mostly been directed toward Kibaki’s tribe, the Kikuyu, had decreased following the announcement that Annan was coming to mediate.

On Friday in Nakuru, police collected 10 more bodies in the outskirts. Several others victims were seriously injured, following attacks by armed youths, who blocked roads and hacked people.

Two of the dead were allegedly shot by police in Nakuru Blankets and Kapkures trading centers. The two were among youths who had attacked a rival community, police said.

Police challenge numbers from the press
On Saturday morning, police collected 16 bodies at Kaptembwa and Pondamali areas while three more were yet to be picked by evening. The crisis escalated as police denied that a curfew had been imposed in the town to contain the violence.

But a visit to the municipal mortuary on the following day revealed over 20 bodies with arrows still lodged in them and others burnt.

Police moved from street to street in the estates collecting the mutilated and burnt bodies.  They said the victims were killed when youths from rival communities clashed. They further added that no one was killed or houses torched after the curfew was imposed.

Annan visited some of the internally displaced people then told Kibaki and Odinga to be ready to make hard choices on the negotiation table for the sake of peace.

Even as mediation talks go on, “[you] must be prepared to take tough decisions to restore peace to build a strong and viable Kenya,” Annan told Kibaki and Odinga.
The former UN secretary general and his team of former South African First Lady Graca Machel and former Tanzanian President Benjamin Mkapa earlier in the morning flew to displaced persons’ camps in the Rift Valley districts of Molo and Trans Nzoia. At Kachibora, in Trans Nzoia, Annan called for the arrest and subsequent prosecution of perpetrators of violence.

The former UN chief flew to the camp currently hosting 20,000 people in a police chopper amid tight security. He asked Kenyan leaders to put heads together and bring an end to the violence.

Although the attacks at the end of last year were sparked by the disputed election, the fighting has now taken on a different face. Old inter-ethnic scores, some going back generations, are being settled. Many relate to disputes over land which different communities claim was stolen from them.

Flawed elections
Both International and domestic observers have raised concerns over the elections which they described as “heavily flawed.” The results were delayed for more than a day, at a time when ODM candidate Raila Odinga was leading.

The Electoral Commission of Kenya (ECK) said a highly unusual number of people only voted in the presidential election but not the parliamentary or local polls held at the same time. ECK has since explained that the presidential and parliamentary elections are different and people are not obliged to vote in both.

According to the official results, Kibaki won with a slim margin of about 230,000 votes out of a total cast of some 10 million. In the parliamentary race, Odinga’s ODM won twice as many seats as Kibaki’s Party of National Unity (PNU).

But what was more baffling is the fact that in some constituencies the results submitted were different from the ones announced nationally. ECK chairman, Samuel Kivuitu, who had declared Kibaki the winner, admitted in front of television cameras that he could not say for sure if Kibaki had won fairly.

Jendayi Frazer, the U.S. Assistant Secretary for African Affairs, who was sent from Washington after the chaos erupted, has also suggested that both sides could have been responsible for rigging.

Donors threaten to withhold aid
The crisis facing Kenya resulted in donors warning that aid to the country may be cut or ended unless there is a satisfactory outcome to the post-election crisis.

Withholding aid would cripple a county with nearly 60 percent of its 37 million living on less than a dollar a day. The western Kenya region, which overwhelmingly voted for Odinga, and where much of the earlier fighting and riots took place, is already experiencing shortages of public services.

In the lakeside city of Kisumu, government services are on the verge of collapse after state installations were either burnt or looted.  Many civil servants fled the province following the post-election violence. Government hospitals and health centers are reeling under a crippling staff shortage and schools remain closed. Public transport has come to a near standstill.

Law courts are operating at half their capacities because of the unprecedented chaos.  Nyanza Provincial Commissioner Paul Olando has twice sent out a public appeal to civil servants to report back to work.

The plight is the same in Kakamega, where the Municipal Council Clerk Margaret Jobita, said the civic authority did not collect any revenues during the fracas because she withdrew all the employees from the field.

“I could not let them risk their lives,” Jobita said. “I also did not want to give [some] employees a chance to steal from the council.”