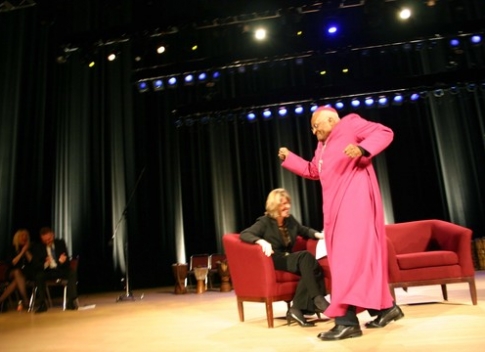 MINNEAPOLIS – In a short speech punctuated by punch lines, Nobel Peace Prize laureate Archbishop Desmond Tutu spoke Friday against war and bloated defense budgets, calling instead for turning enemies into friends and spending on the needy.

“An enemy is a friend waiting to be made,” Tutu told a crowd of about 2,000 people who gathered at the Minneapolis Convention Center to listen to him. “An enemy is really a member of my family.”

The renowned South African archbishop, who was in Minneapolis under invitation from Metropolitan State University, blamed war and poverty on the fact that human beings had forgotten that they were members of the same family. That had led to governments spending “obscene amounts” of money “making instruments of destruction.”

Tutu challenged believers to emulate God, who he said had no enemies. He began to call from a list of people to bring into the family. The crowd interrupted him after each category to applaud.

“I haven’t finished yet,” Tutu said, followed by laughter from the audience. “George Bush,” he added and the auditorium exploded with prolonged laughter and cheers.

Appealing to those who have plenty to share with the needy, Tutu reminded Christians that on Judgment Day, God would not ask them whether they prayed enough of went to church, but instead if they fed Him when He was hungry and clothed Him when He was naked. The poor were like babies in a family, he said.

“The baby contributes nothing, yet in a good family you say that we share according to ability.”

After the 20-minute speech, Tutu took questions from the audience, including one about President Robert Mugabe of Zimbabwe, who he said used to be a good leader before “something snapped in him.”

But Tutu completely avoided George W. Bush’s name in the answer to a question asking for the archbishop’s take on the legacy the U.S. president would leave. Instead he commended first lady Laura Bush.

“People are going to remember Laura Bush and her concern about Burma. How about that?” he said before hurriedly tiptoeing across the stage in an exaggerated manner as the crowd laughed and rose to cheer.