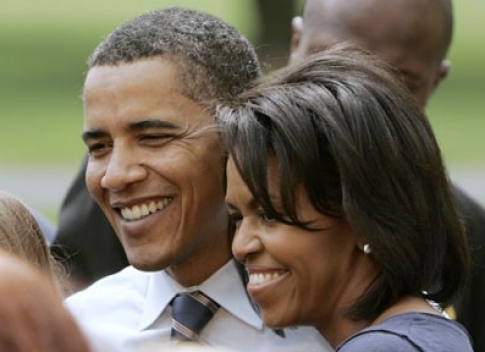 Hillary Clinton, buoyed by a strong turnout of women and older voters,
earned another must-win victory Tuesday in the bitterly contested
Democratic primary in Pennsylvania. Clinton posted the win despite a
strong showing from rival Barack Obama, whose battle back from a 20
percentage point deficit in the polls caused some analysts to predict
in the early evening that the race would be too close to call.

Clinton entered Tuesday’s pivotal contest needing a significant win in
the Keystone State to ward off calls from fellow Democrats for the New
York senator and former first lady to bow out before the party’s
national convention in August.

The strong showing enables Clinton to at least argue that she still has
a shot to overcome Obama’s popularity — and fundraising ability.

Campaign figures released Sunday showed Obama holding on to his massive
financial advantage, with $41 million raised in March and $42 million
available to spend against Clinton this month.

Clinton reported raising $20 million in March and had $9 million for
the primary available at the beginning of April. But she also reported
debts of $10.3 million, putting her in the red.

Republican nominee-in-waiting John McCain continued a remarkable
rebound. He was broke at the time of the first primary in New
Hampshire, but came back to run his Republican rivals out of the race.
His March report showed he raised $15.2 million and had $11.6 million
in the bank, the best fundraising performance of his campaign.

With just nine pre-convention contests remaining after Pennsylvania, it
appears unlikely for either Democratic candidate to gather the 2,025
elected delegates needed for nomination going into the party convention
in August.

The candidates appear likely to split the upcoming delegates. Clinton
is favored in West Virginia and Kentucky, while Obama is expected to
take North Carolina, Oregon and South Dakota. Two states — Indiana and
Montana — are competitive.

But Clinton has a tough reality to overcome to be nominated, no matter
what happens — Obama is practically assured to end the primary season
with a lead in pledged delegates.

Even a win in Pennsylvania was never expected to net Clinton much in
the delegate count, since the urban districts where Obama was strong
have more delegates than those in rural areas, where Clinton was likely
to do well.

The Pennsylvania vote apportions 158 delegates to the August Democratic
national convention, but the party’s rules for dividing those delegates
meant that even a big Clinton victory would do little to close Obama’s
overall lead. Clinton gained at least 28 delegates in Pennsylvania,
with 130 still to be awarded.

No matter what happens in the rest of the race, the odds are stacked
high against Clinton winning the nomination. But Clinton has proven
that she won’t back down when she still has a shot, and the
Pennsylvania showing gave that to her.

Clinton went into Pennsylvania having most recently won the popular
vote in the delegate-heavy states of Texas and Ohio. But Obama leads
nationwide in delegates selected in primary elections and state
caucuses, in the popular vote and the number of pre-convention state
contests won.

That leaves the nomination in the hands of the so-called
superdelegates, the nearly 800 party officials who can pledge support
to either candidate, regardless of state primary or caucus results.

Prior to his wife’s primary win Tuesday, former President Bill Clinton appeared to be getting increasingly testy.

“I think that they played the race card on me,” Clinton said in a radio
interview on WHYY in Philadelphia on Tuesday. “And we now know from
memos on the campaign and everything that they planned to do it all
along.”

Clinton said that his remarks — that the Obama campaign was similar to
the Rev. Jesse Jackson’s in 1988, which was decried as an attempt to
marginalize Obama — were just statements of fact, which the Obama
campaign then tried to turn against him.

“This was used out of context and twisted for political purposes by the
Obama campaign to try to breed resentment elsewhere,” Clinton said.

The new comments came as another Southern contest loomed three weeks
away — the May 6 North Carolina primary. The Washington Post reported
that the Clinton campaign expects to have a hard time in that state
because of its large black population.

Later Tuesday, a reporter from another radio station asked the former
president about the exchange on WHYY, and what Clinton meant when he
“said that the Obama campaign was playing the race card on [him].”

When the reporter pointed to the WHYY radio interview, Clinton denied that that’s what he said.

“No, no, no. That’s not what I said,” he said. “You always follow me
around and play these little games, and I’m not going to play your
games today. This is a day about Election Day. Go back and see what the
question was, and what my answer was. You have mischaracterized it to
get another cheap story to divert the American people from the real
urgent issues before us, and I choose not to play your game today. Have
a nice day.”

In stark comparison, Obama appeared to be enjoying his front-runner status.

Four days before the primary, some 35,000 people jammed into
Independence Park in Philadelphia to see Obama. It was the largest
crowd of his campaign yet, exceeding the 30,000 who greeted Obama and
Oprah Winfrey in December in Columbia, S.C.

“It was over 200 years ago that a group of patriots gathered in this
city to do something that no one in the world believed they could do,”
Obama said. “After years of a government that didn’t listen to them, or
speak for them, or represent their hopes and their dreams, a few humble
colonists came to Philadelphia to declare their independence from the
tyranny of the British throne.”

The Illinois senator called Sen. Clinton a “tenacious” opponent, but
said it was time to move beyond the politics of the 1990s.

“Her message comes down to this: We can’t really change the
say-anything, do-anything, special interest-driven game in Washington,
so we might as well choose a candidate who really knows how to play
it,” Obama said.

The New York senator began the race with a hefty 20-point lead in
several polls in the state. But Obama’s extensive campaigning and heavy
advertising buys significantly cut into it.

Days said Pennsylvania experienced record voter registration around the
state and in suburban Philadelphia, where Obama worked hard to court
voters who may have been more inclined to support Clinton. There were
also an unprecedented number of new voters registered in the state.

Days added that many Pennsylvania residents told reporters they are
angry about the current economic climate and impending recession, even
though Obama has been criticized for comments he made saying small town
Americans are “bitter” and “cling” to guns and religion.

“The bulk of Pennsylvania is made up of small towns, and that’s where
the battle is being waged,” Days said, adding, “He may do better in
Pennsylvania than people expect.”