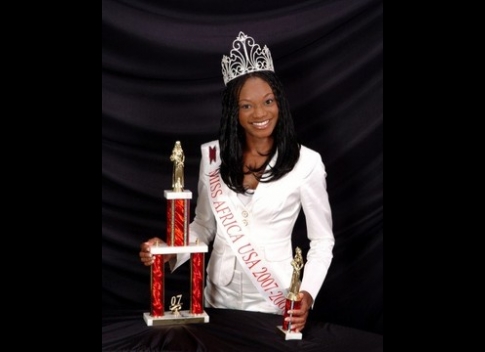 ATLANTA – Small bells trilled in her wake. Her sisal skirts bristled softly in the stifling air as she made her way to the front. Small trinkets around her ankles marked her footsteps as her bare feet landed on the carpet. A half-smiling red and brown mask lay on her head. On reaching the dimmed makeshift stage, she reached for the microphone. Having competed in the pageant for the last two years, contestant number three was hoping that the third time was the charm.

“My names are Louise Nunga from Cameroon,” she said. “I will share with you a part of my culture.”

She tugged the mask over her face and pauses for a moment. African drums beat from a speaker mounted on the wall, gradually getting louder. She swayed left and right in time with the beats. The music built to a crescendo. Her sway gained momentum as the drums picked up speed.  She leaped into the air. On landing, her footfalls were surprisingly soft. She leaped again and the trinkets marked the same muted footfalls.  She bent from the waist down. She peered at the audience as if daring the crowd and waved the fly whisk in a mock exorcism. In less than two minutes, Nunga had performed a traditional masquerade dance from northern Cameroon.

Louise Nunga, a junior at the University of West Georgia, is one of the six contestants of Miss Africa USA Scholarship Pageant. The preliminaries for all southern states were held in mid June at Georgia State University. The pageant, which is in its fourth year running, is open to any female of African descent 27 years and younger, without children or a spouse.

The event raises funds for African Women’s Fundation, a non-profit organization focused on helping deprived women and children in Africa. The organization also acts as an advocates for the protection of Women and Children’s rights and campaigns against harmful practices such as breast ironing, child marriages, child slavery, female genital mutilation and other social issues. Entrants must find sponsors willing to support their cause as it is a charity event.

Carmen Greaves, an organizer, said the pageant is also a platform for important issues in the communities here and back home, especially empowering women.

“We believe women can be leaders,” Greaves said. “Look at Liberia, they have a female president.”

Greaves said that the role of the pageant was to inspire women and let them know that they too could be leaders. According to her, the queen should be beautiful, intelligent and be committed to highlighting women’s issues in Africa.

While beauty and physical fitness are important, the pageant also stresses leadership and scholarship. Entrants must be well informed on current issues in Africa and the world around them. The competitors must also be enrolled in school the semester before auditioning and be active in their respective communities.

Last year’s winner, Mfonobong Essiet, headed several HIV/AIDS awareness campaigns here in the United States and abroad. During her reign as queen she worked with several organizations like Medshare International, a company that bridges the gap between the medical surplus in the U.S and the lack of proper health care in developing countries.

Contestants will be judged on different categories ranging from physical fitness, talent, self confidence and African wear. Lady Kate Njeuma, the founding lady of the pageant, told a popular magazine (ugpulse.com) that the contest had had to undergo some changes to make it more Afro centric. Instead of having a regular swimsuit category, the contestants will don African beach wear, since some previous contestants had expressed discomfort in this section especially if their families were in attendance.

The main event is scheduled for Nov. 1 in Atlanta, but other preliminaries will be held in states like Maryland, Texas and New Jersey.

Dorcas Komo is Mshale's correspondent in the Southern states of the U.S.