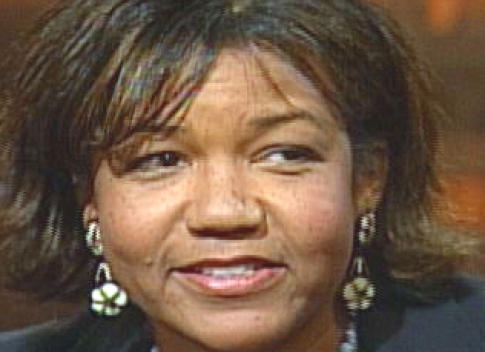 “For years the Cooper daughters—Helene, her sister Marlene, and Eunice—blissfully enjoyed the trappings of wealth and advantage. But Liberia was like an unwatched pot of water left boiling on the stove. And on April 12, 1980, a group of soldiers staged a coup d’etat, assassinating President William Tolbert and executing his cabinet. The Coopers and the entire Congo class were now the hunted, being imprisoned, shot, tortured, and raped. After a brutal daylight attack by a ragtag crew of soldiers, Helene, Marlene, and their mother fled Sugar Beach, and then Liberia, for America. They left Eunice behind.”
-The House at Sugar Beach – front flap

Minneapolis, MN—Liberian-born Helene Cooper, author and diplomatic correspondent for the New York Times, was here on a promotional tour of her book “The House at Sugar Beach: In Search of a Lost African Childhood.”

The more recent bloody civil war, 1989-2003, involving Charles Taylor and President Samuel Doe is usually what most people are reminded of when Liberia is mentioned. That period in Liberia’s history eclipsed the previous coup d’etat, of President Tolbert, in 1980, and the murder of members of his regime led by Samuel Doe and fellow soldiers of the Liberian Armed Forces. It was a critical time in the history of Liberia and many Liberians still carry the deep scars—emotional and physical—of that dark period.

Helene Cooper’s Sugar Beach tells a Before and After story of her life around the April 1980 change in regime. Cooper’s memoir relates the story of a privileged childhood linked to the bloodline of Elijah Johnson, one the first American freed slaves that chose to return to Africa, fleeing slavery and a life of racial discrimination. As one of the founding families of Liberia, the Coopers were part of the minority Americo-Liberian elite ruling class that monopolized political power and restricted voting rights of the indigenous population. They dominated all sectors of Liberia until April 12, 1980. Life for Helene went from that of a privileged princess who lived with her family in a 22-room custom-made beachfront home with servants and private school, to that of an “African refugee” in Knoxville, TN, where she lived in cramped apartments and struggled to make ends meet, like many American families.

For many years she did everything she could to blend into her new American life, shutting off the memories, feelings and emotions of her past life.

“For a long time I thought of Liberia as a place to die and only those who stay out, live,” Cooper said in reference to happier times and many love ones lost in Liberia. The tipping point was a near-death accident while on assignment, reporting on the war in Iraq. As she lay in the Iraqi dessert sand she thought of Liberia and decided that if she was going to die, it should be in Liberia—her own country.

One week into her book tour, Cooper described her trip to Minnesota as “cool,” admitting that she was ‘a bit nervous about speaking to predominantly-Liberian crowd’ and expressed gratitude for the warm welcome.

In fact, her trip to Minnesota sort of brings her full circle—where she got her first, real-world reporting. According to her memoir, in 1985, the summer after her sophomore year at the University of North Carolina, Cooper stayed with her brother and his wife residing in Minneapolis at the time. She had tried to get an internship with the Minneapolis Star-Tribune and the St. Paul Pioneer Press but was turned down because of her lack of experience so she cold-called every alternative newspaper, magazine and supermarket circular in the area. The St. Paul Skyway News offered her a non-paid internship as a reporter—her first article was a profile of a police artist.

One of her scheduled appearances during her stop in Minnesota was at North View International Baccalaureate World School in Brooklyn Park, where a Book Reading was organized by a concerted effort of community organizations. In attendance were over 100 well wishers, book lovers, community members, students, staff and administrators of the Osseo Area Schools and members of the Brooklyn Park City Council.

To introduce the author were two students from North View’s High Achievers Program, Ben and Charles, wearing t-shirts with the slogan “Get Caught Reading”.

The High Achievers Program is a mentoring and support program for junior high and high school students to increase the enrollment and under-represented students in special advanced classes. To encourage students in the program to continue reading, organizers of Cooper’s book reading included the students in planning the Book Reading.

Cooper read excerpts from her book; drawing sighs of despair and laughs at times and in between, offered background and context on some of the scenes.

Throughout the book she refers to her class of people (decedents of freed slaves) as “Congo” and native Liberians as “Country” (meaning of a lower class). These are highly emotional terms in Liberian circles and considered hot button topics, of which Cooper is very aware.

In defense Cooper says, “That’s the whole point of my using them—that’s how it was. It may not be politically correct but if we aren’t honest about it and face up to what really happened, then we aren’t doing ourselves any favors,” Cooper said. “There’s no need to sugar-coat what it was.”

Cooper expects that different people will read her book through different lenses and come away with their own interpretations. “I can’t control how people review my book and I certainly can’t do anything about people who choose to boil the book down to a paragraph or term,” Cooper said.

Helene Cooper admitted that writing Sugar Beach was the hardest thing she has ever done, dwarfing challenging, globe-trekking assignments as a diplomatic reporter. She said that the idea of the book started as a conversation about her past life with some of her “reporter friends.”  It took her four years to complete the book and the support of her family, friends and professional colleagues kept her going those times when it looked like she would never get it right.

“When I told my friends about my past in Liberia, I left out some details that I hadn’t come to grips with, like my sister Eunice, who was left behind,” Cooper said.

Writing Sugar Beach has resulted in many discoveries for Cooper: her inner strength, stories of her ancestors, the strength of family, and truths about her past—some of which she’s proud of and others she’s not so proud of. She reminds people that “as humans people err in judgment” and the “best we can do is face up to our mistakes and do the best we can”.

The House at Sugar Beach: In Search of a Lost African Childhood by Helene Cooper. Published September 2008, by Simon & Schuster. Available online and in all major bookstores.