Home Opinion Push for Diversity in an Obama Administration 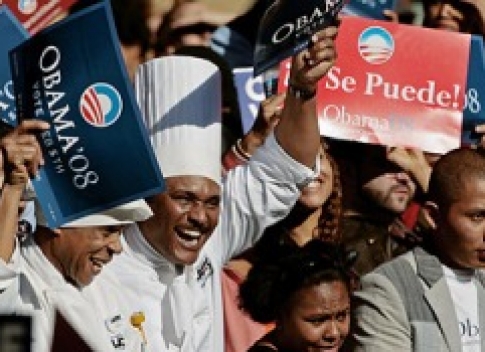 The election of the first African-American president has raised hopes–and some expectations–that Barack Obama’s administration will have more racial, ethnic and gender diversity than those of his predecessors. But the first round of names being floated in the news media for top cabinet and advisor posts are primarily familiar one – white males, many of whom served in the Clinton or Bush administrations.

Some advocacy groups are doing more than hoping for diversity in a new administration. They are actively organizing to make sure that when President-elect Obama and his transition teams begin filling posts–from highest level cabinet secretaries to entry level staffers throughout the executive branch–they will have the resumes of highly qualified people of color from which to choose.

For many political activists and advocates, a new administration naturally offers the opportunity to recruit and promote diverse leadership. And this time, with a candidate whose election was sealed with the sizeable support of Latinos, the idea of diversity seems not only attainable. It seems appropriate.

One organized effort is the Talent Bank Project at the Earl Warren Institute for Race, Ethnicity and Diversity at the University of California, Berkeley School of Law. It was funded by a grant from PowerPac, a Bay Area nonprofit, and is being run by former Clinton Administration official Maria Echaveste, a fellow at the Warren Institute.

“We thought it would be important regardless of which administration came in to have a talent book, in a sense, of people of color that could go into a new administration,” said Maria Blanco, executive director of the Institute. “We weren’t so much thinking about top cabinet positions. There are a lot from that level down that are very important, that matter. But because of the nature of DC, it’s an insiders hiring world, which tends to exclude people of color because they aren’t in those circles.”

Echaveste, Blanco, PowerPac president Steve Phillips and UC law school Dean Christopher Edley began talking about the Talent Bank back in July, Blanco said, and with the grant, they launched the project. They hired a data analyst, assembled a nonpartisan advisory board and obtained the pro bono services of Korn/Kerry, an executive recruiting firm. Three weeks before the election, the Talent Bank announced it was gathering resumes for positions in the new administration, and it received “a trickle,” according to Blanco.

Then came Obama’s victory, and the project has been inundated with calls and resumes, which now number about 600. “Eighty percent of those came in last week,” Blanco said. “We’ll winnow those down to the best and brightest list of people of color and make sure that people are who they say they are, with the experience they claim to have.” Echaveste and Edley, who was recently named an advisor to Obama’s transition team, will make sure their list gets into the right hands in Washington.

Part of the diversity the project hopes to inject in the Obama Administration is geographic. The halls of power centered in the nation’s capital are narrow and tend to replenish from the same limited pools of leadership and talent. And most of that comes from the east coast. “We are very aware of where we are geographically. People often don’t have as many connections and mentors in DC,” Blanco said. “We’re trying to lift up people of color’s names, and the fact that they are West Coast names we think is important.”

Blanco acknowledged that so far, diversity has been missing from the pool of potential top level appointees being publicly discussed, a factor of how Washington works. “There is always a balance between having people who know Congress and know the agencies,” she said. “There is a strong pull toward experience, and that means you replicate the exclusion.”

Such words are cold comfort to Latino advocates, who note that Obama’s landslide win was owed in great measure to the 66 percent of Latino voters who supported him, especially in once-Republican states like Colorado, Nevada and Florida. So far, even the president-elect’s transition team is lacking diversity, says Angelo Falcon, president of the National Institute for Latino Policy. “It is no surprise that the Obama transition looks very white because he has to put together a team of people that knows how Washington works,” Falcon said. “The fact is that so few Latinos have been in a position to be such players, whether under Bush I, Bush II or even Clinton.”

Falcon’s organization is a member of the National Hispanic Leadership Agenda, a coalition of advocacy groups which is now campaigning for the appointment of former New Mexico governor Bill Richardson to a cabinet post. “We do hear the names of such Latino Clintonites like Federico Peña, Bill Richardson and Maria Echaveste, as well Antonio Villaraigosa, Frank Sanchez and others as players in the transition teams,” he said. “That’s encouraging, but we will have to wait and see.”

Like Blanco, Falcon believes that lower level positions are in some ways more critical for building diverse leadership, especially for the future. Latinos in particular are the most underrepresented racial-ethnic group in the federal government, he noted, making up less than 8 percent of its workforce despite being over 13 percent of the civilian labor force.

“The true test of how inclusive Obama will be of Latinos during the transition will come in second- and third-tier positions in the federal agencies, in positions like undersecretary, program directors and so on,” Falcon said. “Latinos will have to take a hard and cold view of this administration and be ready to hold his feet to the fire. ‘Si, se puede’ needs to now become, ‘¡Y si no, maceta!’ [‘And if not, we’ll chop your head off!’]