Home Features Village Mentors: How grassroots advocates are leading the fight against AIDS in... 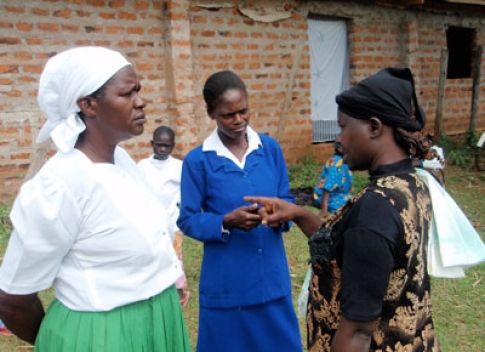 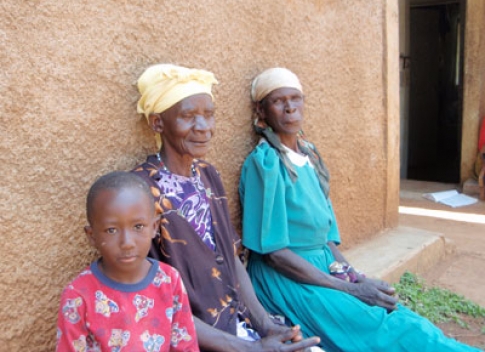 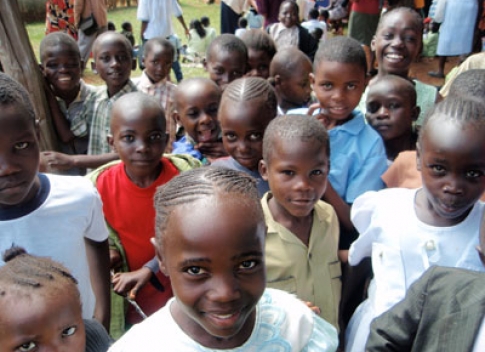 DAGO VILLAGE, Kenya – While her husband and children still sleep, Pamela Adoyo rises in the early morning darkness to milk the family cow. Side-stepping watch dogs, she then walks to the market a mile up the road through fields of sugar cane, sells the milk for a few cents, and returns home to toast bread over an open fire.

Adoyo’s morning ritual is shared by women all over this area in southwest Kenya. Their daily struggle for subsistence living, while maintaining their traditional roles as mothers and wives, starts quietly and runs long. But for Adoyo and dozens of other Dago women, the generations-long fight for family survival includes leading the battle against HIV and AIDS, one house at a time, in a region that has been ravaged by the epidemic.

About 50 percent of Kenya’s 1.4 million annual HIV/AIDS cases originate in Nyanza province, home of Dago village. Health care here is rudimentary, and social services are practically non-existent. In past years, HIV and AIDS patients were more likely to be mocked or shunned than they were to be publicly cared for. Change has come slowly and only after great cost, but today the Dago Women’s Group, a grassroots group Adoyo helped found, is helping turn the tide.

In a day that starts with the 5 a.m. cow milking and ends at 10 p.m., when her family has finished its dinner, Adoyo squeezes time from her home and family to manage the 45 local women who are caregivers to the sick. Separately, they fan out to 511 households to check on the 365 men and women in the area who are “down” with HIV/AIDS, and the nearly 2,000 AIDS orphans and other children affected by the epidemic.

On one recent Saturday, traditionally a day of rest for the women in Dago, Adoyo was meeting with the caregivers, or “mentors,” to decide which houses they must visit during the coming week.

When a patient has been diagnosed with HIV and has received medication from the local health clinic, Adoyo’s caregivers take over. They make home visits, organize support groups and give comfort when patients phone them in despair. If they visit a home and suspect someone is HIV positive, they make sure all family members and neighbors are tested. They give out their cell phone numbers so that if someone requires urgent medical care in the middle of the night, they can provide transportation to the nearest hospital — a 40-minute motorbike ride, with the patient riding behind.

“You always say ‘yes’ whenever they call,” Adoyo says. “When you say ‘yes,’ that person has all the hope in the world – that you will come, that you are going to help them, that you will advise. If you say ‘no,’ you have already killed them.”

Adoyo’s three teenage daughters are home on a summer break from boarding school this day, helping with the dishes and laundry, giving her rare time to talk. Susan, Rachel and Christine sleep in the kitchen when they are home, a dark room detached from the main house because of the smoke. Adoyo and her husband Duncan, a retired schoolteacher, share the other room beside the dining table.

Adoyo explains how she and Duncan adopted Susan and Rachel when their birth mothers died from meningitis. She pauses, then adds in a whisper that meningitis also took the life of her three-year-old son Omondi. Her other sons — George, Edwin, Patrick and Isaiah — all live in Nairobi, six hours by bus from Dago, where they are attending university or looking for work.

The mentors – nearly all of them AIDS widows — who stop by throughout the morning treat Adoyo as one would a village elder. They wait patiently for a few words with her, asking for religious guidance and personal advice as well as their daily work assignments.

In between visits, Adoyo explains how she left her home in Kogelo, a village 150 miles away, and arrived in Dago 29 years ago as a wide-eyed bride of 20. The daughter of a chieftain, Adoyo was accustomed to a certain level of privilege. But in Dago, poverty was grinding and alcoholism was rampant. Children were kept home from school to collect firewood, as few parents believed an education offered any hope of advancement, Jobs were scarce – only the local sugarcane factory offered a handful of men and women employment.

But Adoyo settled in, raised her family and became a church leader. Over time, she became a community organizer.

A small prayer group of Adoyo’s that met under a tree raised funds to build a new church. Adoyo and her friends then launched a temperance movement and encouraged children’s re-enrollment in school. In 1996, the women formed the Dago Women’s Group, a support network and revolving bank based on the “merry-go-round” concept popular through much of Kenya: Group members contributed money and food to a community pot, which was used to fund member’s individual projects.

But their lives were soon turned upside down.

AIDS struck Dago with a force in the ‘90s, ripping apart the social fabric. The government was ill-prepared to cope with the crisis, so the Dago Women’s Group moved in. The women tended to the sick, and cared for the orphans and vulnerable children – the OVCs, as the relief groups call them – left behind by the deadly virus. The needs were great, and resources extremely limited. In the spring of 2001, Adoyo applied for assistance from the Peace Corps.

By the end of the year, Adoyo says, a Peace Corps volunteer was in place and assessing Dago’s needs. Separately, the Arkansas charitable group Heifer Project International trained many area women to raise dairy cattle, helping to reduce malnutrition in children under five. USAID, the U.S. government’s foreign aid agency, then opened an office in Dago and made Adoyo the “liaison officer” in charge of outreach to AIDS orphans and those with HIV.

USAID assistance came with stipends and titles. The women were now “mentors and social workers,” and the Dago Women’s Group became “a community-based organization.” What began as a group of neighbors working on behalf of one another and caring for the sick was now a “non-profit organization.” It’s a word Adoyo relishes, mainly because it gives her group the stamp of Western legitimacy and helps it raise funds at home and abroad – donors are always happier to give to “non-profits,” she explains, than to individuals or “grassroots” organizations.

AIDS has orphaned at least 1.9 million children in Kenya, and the number is certain to climb. The United Nations now estimates that 68 million people will die from AIDS in sub-Saharan Africa in the next 20 years.

The numbers are daunting. But even in the face of such heartbreak, Adoyo takes pride in the progress the Dago Women’s Group has made against the AIDS epidemic. She says they’ve been especially successful in reducing the shame once attached to the disease.

“There was the feeling that, ‘I can’t disclose my status no matter what happened, I can’t say that I am sick because people will laugh at me,’” Adoyo says. “The stigma was high. That was why people were just dying with the disease – they didn’t want people to know.” Many wouldn’t even get tested, she said, contributing to the spread of the epidemic.

“Now they are coming out to say their status. They go to get tested and they say to the mentor, ‘I am negative, or, I am positive.’ If they are positive they say, ‘how can you help me to live positively?'”

Adoyo is most proud of the orphanage the women built, Dago Dala Hera (“Home of Love”), with fundraising assistance from Dago’s first Peace Corps volunteer. On September 24th, 20 girls were moved in, cared for by “volunteer mothers,” most of whom are AIDS widows. Plans are being made to take in the first group of boys.

Adoyo’s successes have not come without personal stress. She struggles to balance her traditional duties as a wife and mother, with the meetings and trainings that take her away from the home.

“This is where I say it’s hard,” she says. “An African woman has her work to do, and the work is too much for them.” In the patriarchal order of her village, Adoyo says, a wife has always been expected to follow her husband’s orders without question. That has to change, she says.

“We say, okay, it is good to do this (housework), but now I am going to do this also (work outside of the house),” Adoyo says. “We want women to be part and parcel of the family, the conversation and the decision-making, everything.”

Her husband devotes his days to farming and to working on the orphanage. Touring the girls’ dormitory, Duncan Adoyo says he’s proud of his wife’s leadership in the community. “Pamela’s work has been a turning point for the village and a bright start for the present and future generations,” he says. “As the husband I appreciate so much the work and will keep supporting her in the quest to help the villages.”

Back at Adoyo’s home, Irene, one of the Dago Women’s Group caregivers, waits quietly for a moment to speak with her director. Like the other mentors, Irene is responsible for 13 households and scores of sick and vulnerable villagers. Adoyo will be away at a USAID training seminar the coming week, so Irene has stopped by to check in on what needs to be done.

While Adoyo is quick to acknowledge how much foreign aid has benefited her village and enabled her group to extend its reach, she says that more is needed. Since the beginning of the year, the cost of fuel has tripled in Kenya. Adoyo’s group has asked for more money to hire motorbike drivers to carry the sick to the hospital. USAID denied the request.

Adoyo points to the bicycle leaning against the house. USAID gives each woman a bicycle to reach the sick, she says. It’s better than walking, but it’s still nearly impossible to carry someone on the back for miles over rutted, pot-holed roads.

The motorbikes Adoyo and her caregivers have bought with their stipends are a faster and easier ride than their bikes, but they’re still difficult to use when carrying a sick patient. Imagine trying to do it in the middle of the night, Adoyo says, when your only light is the moon, stars and a dim headlight.

“Most of their funds are going directly to the orphans, to our people with HIV/AIDS. We don’t want to be greedy,” Adoyo says. “But if we could get an ambulance, that would help us tremendously, because of the distance to reach our people.”

Her son Isaiah, a student at Kenyatta University in Nairobi, grabs a calculator from the next room and comes back with the figure for a new Nissan ambulance: $30,000.

Trying to stay hopeful, Adoyo says, “So a used one would cost half!”

The moment passes, as she considers the improbability of such a gift. Then she adds, “However little bit we have, we say ‘thank you,’ because it is something.”

To learn more about the work of Dago Dala Hera orphanage, or to make a contribution to the boy’s dormitory visit Village Volunteers.