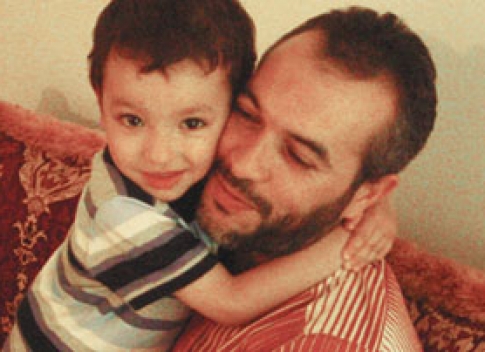 FALLS CHURCH, Va. — A Moroccan couple living in Falls Church, Va. reunited with their toddler on Aug. 6, 2007 after a two year-separation due to delays on his immigration papers.

Abdeloihab Boujrad, 38, a U.S. citizen originally from Morocco, and his wife Leila Bendaoud, 31, had been trying since June 2005 to get their son to join them in the United States.

Around 11:00 pm, the 3-year-old opened his eyes in his father’s arms at Reagan National Airport after getting off the plane with a family friend. When he saw his parents in front of his eyes, he first thought he was dreaming and started to doze off.

The U.S. Citizenship and Immigration Services (USCIS) has been scrutinized by legal experts and immigrant advocates on their immigration hold-ups. Since the attacks of 9/11, the Department of Homeland Security (DHS) has been working closely with the USCIS to monitor and screen all immigration documents, causing indefinite citizenship and green card delays.

“I received many letters saying the application is pending. They kept on giving different answers, but never denied the application,” said Boujrad. “I made about 150 phone calls to the INS Vermont Service Center.”

Boujrad came to the United States in 1997 after winning the U.S. immigration lottery in Morocco.

After saving money from a hotel management position and a part-time taxi cab business, he returned to Morocco to get married to Leila in 1999.

The new couple would be together only twice a year when Abdeloihab Boujrad would visit Leila in Morocco. Ahmed Yassine Boujrad was born on May 24, 2004.

Boujrad passed his citizenship test in 2003; however the USCIS delayed his oath ceremony for eighteen months. After constant phone calling and personal visits to the immigration office, Boujrad was invited to the citizenship oath ceremony in 2005.

“When you apply for citizenship and have passed the test, I was told by my attorney it shouldn’t take more than six to seven months to take the oath and receive citizenship status, but for me, it took almost two years,” said Boujrad.

After he received his citizenship status, he immediately filed for his wife to come to the United States with his son. When Leila’s visa allowing her to travel to the United States was about to expire in 2005, she unwillingly decided to leave their 18-month old son with her husband’s sister.

The Washington-based Muslim civil rights advocacy group CAIR suspected the unusual delay was caused by the similarity in Ahmed Yassine’s name to the founder of the Palestinian Islamic Resistance Group Hamas, Sheikh Ahmed Yassin, who was killed in 2004 by Israeli military forces.

“We strongly believe his name had a lot to do with the hold-up,” said Attorney Morris Days, civil rights manager of Council on American Islamic Relations (CAIR) MD/VA Chapter.

According to Morris, Muslims have faced unexplained delays and denials on immigration and citizenship applications since the attacks of 9/11. The USCIS is implementing rules that are not legislated and citizenships are being delayed by the Federal Bureau of Investigation (FBI).

Morris told the Muslim Link he is working on more than a dozen cases in which Muslims are facing unprecedented hold-ups on various immigration issues.

Morris clarified the USCIS usually reviews cases when there is some deficiency or the case needs clarification on the validity of someone being in the United States.

The Boujrads’ case did not need any clarification, said Morris.

The two-year isolation from their son adversely affected their well-being while they were trying to remain patient.

“While I understood I have to be patient, I still suffered from depression,” said Boujrad.

Leila cried for weeks, didn’t communicate for months, and spent the majority of her time with the neighbor’s children to take her mind off of her son. At times, Leila felt so lonely she asked her husband to take her back to Morocco.

“Things were very difficult for my wife and I. We never imagined having our first child and then being forced to be estranged from him,” said Boujrad.

Whenever the Boujrads thought about their son, they went online and communicated with Ahmed Yassine through their Web-Cam.

It is still not the same as interacting in person, said Leila.

Ahmed Yassine’s parents were reminded about him every minute of their lives.

Whenever a child called his father, Boujrad remembered his son’s soft voice calling him
“baba.”

Whenever Leila returned home from running errands, she imagined her son running to the door to greet her or help her with groceries.

Two years ago, the Boujrads were dealing with their frustration by themselves. In 2007, one evening after Maghrib prayer, Boujrad told his story to Dar Al-Hijrah Islamic Center’s outreach coordinator, Imam Johari Abdul-Malik.

Imam Johari immediately called Imam Mohammed Magid of the All Dulles Area Muslim Society (ADAMS), who then put him in touch with an immigration attorney at CAIR MD/VA. Boujrad said CAIR MD/VA advocated on his behalf. The national media picked up the story and brought attention to his “unexplainable case.”

In June 2007, after national media coverage highlighted the struggle of the family, USCIS approved the paperwork allowing his son to immigrate.

“The director of the INS called me and apologized and approved the case,” said Boujrad.

The family was asked what lesson they learned throughout this two-year process.

“Patience is everything. If you are patient, Allah will help you,” said Boujrad.

“I observed that they were very patient with the process,” said Tehreema Ali, outreach coordinator for CIAR MD/VA. “They always said they would continuously make duaa and understood that Allah tests those whom he loves.”

Ali said since Leila joined her son, she is overjoyed. “It seemed as if all of her sufferings went away with the first glimpse of her son.”

The parents of Ahmed Yassine said one positive aspect about the prolonged separation is their sons’ ability to speak fluent Arabic. They said they are happy their son was exposed to an Islamic environment from a young age.

Now, the Boujrads hope their son memorizes the Quran. They are currently looking into a full-time Hifz school for Ahmed Yassine while waiting on the arrival of their second child.

“There couldn’t have been a better time to expand my family now that my older son is here with us,” said Boujrad.

As Leila took Ahmed Yassine to his room for an afternoon nap, she shed tears and told the Muslim Link, “this room has been empty for two years.”

Leila said she suffered from anxiety and depression passing through the second bedroom, wondering when she will hear the noises of laughter of her son.

Leila enjoys doing everything with her son. Ahmed Yassine helps her with the house chores, reads the Quran, learns Arabic, and entertains her with his silly jokes.

“The old days of suffering have just become bitter memories. I thank Allah for bringing my baby back to me,” said Leila.

Ahmed Yassine’s parents admitted they were nervous their son would have forgotten them from not having physical interaction with his parents. On the contrary, they found their son to be the opposite.

Now, the family has some catching up to do. They take their son to Chucky Cheese, the park, and library so he can learn about his surroundings. They are taking small steps to teach him his first English alphabets.

Relaxing at home together, his dad asked Ahmed Yassine who he loves more.

Calls made to the Moroccan embassy and the USCIS for comments weren’t returned.