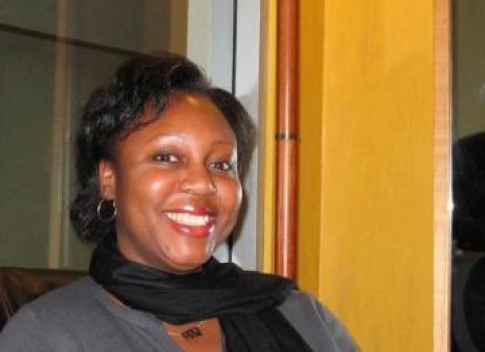 Like most kids, Rita Apaloo’s daughter has watched her mother
closely. She sees enough value in her mother’s monthly African Women
Connect meetings to give her parents some advice.

“Dad should start an African Men Connect group,” she told them.

“No, no,” her father laughed. “I don’t need to connect with other men. Let mom do all the connecting.”

Rita Apaloo has done her fair share of connecting. She coordinates a
leadership program for minority entrepreneurs at the Metropolitan
Economic Development Association’s. Outside her job she has developed a
passion for bringing together African women professionals. She spoke
here about creating community for these women, her transition from
Liberia to Minnesota, the impact of September 11th on her, and the
challenges facing the Liberian Community

Why did you start African Women Connect?

When my husband and I moved out to Brooklyn Park I thought, “I have this nice big basement and I can invite people here.” First I just told friends I knew. Now we have about 15 to 20 women each month.

I call it a relationship building organization for African women to create friendships, business, and community. I’ve always been interested in community and women’s issues. Being a new immigrant to America you tend to feel isolated and alone. When you have a career or you’re in corporate America there’s not a whole lot of people who look like you.

We talk about different things each month. Sometimes we’ll talk about just the stresses of working in corporate America. We just read Skinners Drift by a South African writer. We had a Breast Cancer survivor come and talk to the group.

We’ll also do fundraisers. One of our ladies has a non-profit organization Nibakure Children’s Village, so we helped her raise funds to build a compound in Rwanda. Another time we did an “Ethnic food items” drive to donate to the CEAP in Brooklyn Park.

I came up with the ethnic food drive because, years back, I had signed up for a food share program in order to make ends meet. I was very disappointed to find that all the food were things I didn’t know how to cook. I tried to make that work, but it’s very hard if you didn’t know what to do with it. Thankfully now the United Way has a list of ethnic food items you can donate.

We also do fun things as a group. We went to a play at the Walker and went bowling once. Now maybe you think, yeah, well everybody goes bowling.

No. Nuh-uh. This group does not bowl!

Well, most of the balls went in the gutter. We laughed so hard and we had all our neighbors looking at us.

What is your professional background?

In Liberia I had just started university when the civil war reached Monrovia. This was 1990. My family and I were fortunate enough to get out and we went next door. We actually had to walk on foot from Monrovia to the Sierra Leon [approximately 60 miles] where we were for a while. And of course it was a very difficult traumatizing time. It’s difficult to talk about.

When I finally made it to the States I was in shock and I’m sure had Post-Traumatic disorder and all that. In high school I had been very vocal, the typical activist. I used to write short stories, poetry, whatever. I just stopped writing.

I had had a dream of being a journalist and had been studying mass communications. All of a sudden I didn’t want to do that. I tried a couple of times to get back in school in the US, but didn’t really have the desire.

Then 9/11 happened and a surprising thing happened to me. It shocked me out of what I was going through. It was then that I had my nightmares and I revisited this feeling of fear. But oddly, after 9/11 I started shedding this rigid box that I had been in for a few years.

I woke up from this sleep and thought, “oh my God what have I been doing?”

What role does family play in your life?

When I was growing up my mother worked in an administrative office. My dad really wanted her to be a stay at home mom, but it was important for her to socialize, use her skills and talents, and contribute to the world. So her struggle and her life have always been inspiring to her kids.

I now have three kids who are 11, 7, and 2. It’s not always easy to balance it all. But kids learn how to make things work if you just show them how.

I mentor a Liberian teenager through the Liberian Women Initiative of Minnesota. I take my kids with me sometimes when I’m doing volunteer work and I let them know that they can help the community. They think it’s cool.

What are some of the challenges facing the Liberian community in Minnesota today?

The Civil War has made our challenges unique from other African communities. Family life was disrupted during the war and you had people moving around to stay safe. That disruption—in terms of “how do you raise a child, get a basic education, have role models for careers and parents”—all of that was completely gone. And then you come to the United State and how do you get back on track?

I’d like to have a large enough network to help address some of these issues in the community. You have PTOs and school boards where you don’t necessarily have people representing the Liberian community. So let’s look at a professional women to see how we can address this. I think the group of women I see has a better chance of telling their story in a way that the larger community understands.

Some say the Liberian community has not been as successful as other African communities in building support institutions in Minnesota. What is your response to that?

Well, there is some truth to that, but I also encourage people to look at the specific characteristics of the Liberian community. The Somali community—I believe—has clans within the community that really lend themselves to helping each other out.

The Liberian community is different. First of all there’s the English language. That puts you way ahead when you can kind of adjust better. Second, we don’t live close together. We’re all over the place. We’re so dispersed and so independent that in some ways we don’t need each other to find our way. Like any group, though, there are people who are doing well and people who aren’t.

But we haven’t done a very good job at coming together to find solutions. We need to support these smaller nonprofit communities, and collaborate with the larger ones. And we need to get social services to hire professionals from within the Liberian community and give them the reigns.

What does it mean to you personally to have a support network in African Women Connect?

I was hoping to connect with more women like myself, so I came up with this idea and move outside of the comfort zone of the bubble of the people you know. At our December meeting we had women from 11 African countries. I have expanded my network. I’ve learned to go beyond my own community of just Liberians. I’ve gained a lot of good friendships.

I’m not always sure I have the energy to keep it up because it’s a lot of work. But after one meeting this woman just said to me, “you know I’ve been looking for this for a long time and I’ve finally found it.”

When I get comments like that I know that I’m doing the right thing to keep it going.

Mshale’s coverage on one of African Women Connect’s Meetings here.