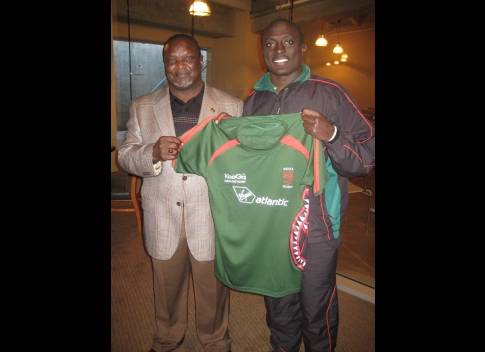 Kenya and South Africa fought hard but came up short in their quest for the cup at the USA Sevens rugby tournament in San Diego, California. The tournament held on February 14th-15th, 2009 drew thousands of fans to picturesque San Diego, many in support of their home country teams.

The rugby seven-a-side game has been steadily gaining popularity in the US and around the world because of its high scores and exciting style of play, where speed and skill are emphasized. The Sevens game is a shorter version of a standard rugby game but with the same rules and is played for 15 minutes by seven player teams instead of the fifteen players of a standard rugby match.

The USA Sevens is the fourth leg of the annual International Rugby Board (IRB) sevens circuit and the largest rugby event in North America. The USA tour was introduced in 2004 in Carson, California but moved to San Diego in 2007 where the IRB has a contract with the city through 2011. The location was chosen for its ideal weather in the month of February while most of the US is still in winter.

The San Diego tournament drew over 35,000 attendees for both days.

South Africa’s Springboks were unbeaten on day one of the tournament sailing through matches with Australia, Georgia and a close 15-14 call against the much improved USA Eagles, to qualify for the cup competition. The Springboks had already tasted glory, winning the cup in the first two legs of the 2008-2009 IRB circuit in Dubai and South Africa. The experienced Springboks with speed, hard nosed defense and a history of Sevens success were among the early front runners. However, it was the show stealing Kenyans that were the crowd favorites on the first day.

Kenya, after being caught flat footed in their first match against Uruguay and losing 14-12, pulled off a stunning comeback. They first beat Wales, then the 2008 USA sevens cup winners New Zealand 24- 7 for the first time in fourteen meetings, staying in the cup competition to the delight of the thousands of cheering Kenyan fans.

“The Kenyans were amazing, that they could pull of such a victory means they could go all the way,” said Peter Welt, a South African fan who had been cheering on the Kenyan team.

On the final day, Kenya bowed out of the cup competition after a 14-7 loss to USA but beat Samoa to set up a New Zealand rematch for the Plate final. New Zealand was able to over come the Kenyans with a 22-7 victory for the Plate trophy.  The South Africans who had earlier beat New Zealand lost to England in the Cup semi-final.

Argentina beat England 19-14 in the Cup final to win the US Sevens for the second time.

“The victory was good for our side, especially for the confidence of younger guys,” Benjamin Ayimba told Mshale on the day one victory against New Zealand. Ayimba, who is the coach of the Kenya team is proud of his team’s performance, “Our next goal is the World Cup.”

The Rugby World Cup Sevens, scheduled for March 5th-7th, 2009 in Dubai, will feature African teams from South Africa, Kenya, Tunisia and Zimbabwe and promises to be the most exciting Rugby Sevens world cup yet.