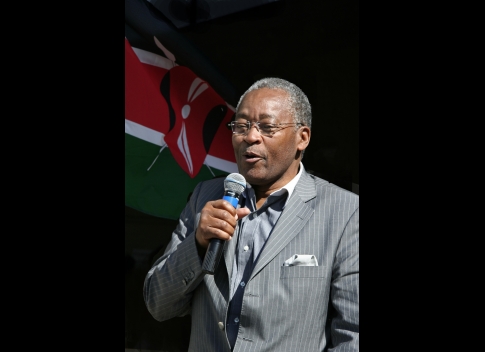 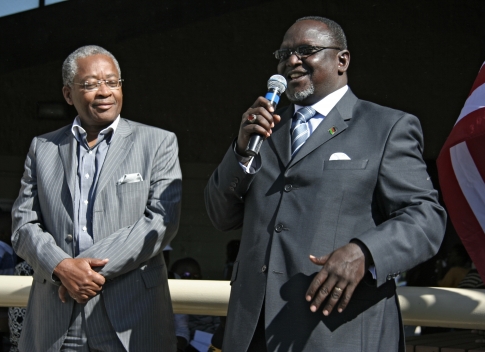 Transport Minister Chirau Ali Mwakwere said over the weekend
that the coalition government in Kenya was stable despite what was portrayed in
the press.”Sasa tuko katika hali ya
kusikizana ki sawa sawa (we are in the process of being in agreement)”. The
Minister was speaking to Kenyans in Minnesota gathered to celebrate Madaraka
day at a local park. He is in the country to be part of the inaugural flight to
Nairobi by Atlanta based Delta Airlines on June 2.

Minnesota was his first stop in the county at the request of
Kenya’s ambassador to the U.S. Peter Ogego. Ambassador Ogego three years ago
declared that official Madaraka day celebrations will be held in Minnesota, a tradition
he has stuck to.

Speaking mostly in Swahili, minister Mwakwere said he was
optimistic that a new constitution will be in place by 2011 in readiness for
the 2012 general elections. Sticking to the script of all Kenyan politicians
whenever they speak to Kenyans in the diaspora, he declared that dual
citizenship was being given serious consideration. “Ni a tunayo (the will is there)”. Without elaborating, he said
calls for dual citizenship will be included in the new constitution as it “is
what the people want’.

Hundreds of Kenyan-Americans listened as the minister
reiterated the importance of Madaraka day saying that even in the current
political climate in Kenya, occasions such as the one being observed have come
to be occasions to come together as one despite political differences.

Other than briefly briefing those present on the political situation
back in Kenya, most of the minister’s remarks centered on recent developments
at his ministry. Among the initiatives he mentioned included the construction of
a new port in Lamu to serve landlocked Ethiopia saying the funds for the
project are already available. The new port will supplement Kenya’s biggest port.
Mombasa.

As he spoke of the developments
on the new port initiative, a Kenyan, Gichiri Ndua, a Kenya Ports Authority
(KPA) corporate Services manager was just last week picked as president of the International
Association of Ports and Harbors (IAPH) becoming the first African to get that position.
He takes over from Mrs Datin Paduka Phang of Malaysia.

The minister also spoke at length on the ambitious Nairobi
metropolitan plan that aspires to transform Nairobi into a modern metropolis.  Although that major initiative is not managed
by his ministry but the Ministry of Nairobi Metropolitan Development, his
ministry has to work closely with that relatively new ministry as transport is
a major component of the plan. Last December when President Mwai Kibaki unveiled
the Nairobi Metro 2030 plan, the cost to implement it was pegged at US$ 423
billion. Nairobi Metro 2030 is part of the bigger Vision 2030 that plans to
develop metropolitan regions across the country. Minister Mwakwere during his
remarks in Minnesota said the plan once implemented will solidify Nairobi’s
position as the economic hub of the region and radically transform Nairobi into
a major economic force.

Ambassador Ogego in commending the local organizing
committee for Madaraka day celebrations said his embassy is willing and ready
to engage the Kenya diaspora on substantive issues “and not petty ones”. He
also handed out certificates of appreciation from the embassy to local Kenyans
in Minnesota that he said have exhibited exemplary community service. As in
previous Madaraka day visits, the ambassador was accompanied by embassy staff
who renewed passports onsite.

Also making brief remarks at the celebration was a
representative from the office of US Senator Amy Klobuchar of Minnesota.

The hundreds of Kenyan-Americans who turned out were later
treated to a soccer match between Kenyans and Ugandans in which Kenya lost 2-1,
after good natured ribbing between both teams’ fans about the disputed Migingo
island.