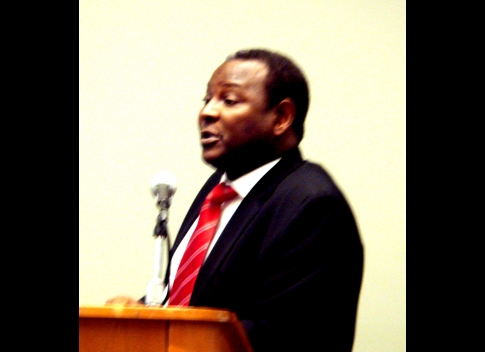 WASHINGTON
– The traditional model of banking has failed, the CEO of East and Central
Africa’s largest bank in terms of deposits, Mr. James Mwangi, said today when
addressing a workshop on the future of Banking in Africa. The Equity Bank boss said
this failure is particularly evident in Africa, which has given his 25 year old
bank an advantage in tapping into the continent’s unbanked.

The
workshop was part of the 7th biennial US-Africa Business summit held in
Washington this week.

Mr.
Mwangi told summit attendees that the future of
banking in his view lies in the convergence between banking and
telecoms.”Equity bank has 56% of all bank deposits in Kenya and through
its responsiveness to its customers has facilitated a high rate of savings by
its customers to the tune of US$900 million”, he said. Its success is also
due in part to its pioneering role in the micro financing movement in Africa
which has won it accolades globally.

Mr.
Mwangi was the only African bank executive officially on the summit program to
participate in the critical workshops taking place during the week long event.

The
Equity bank boss attributed his bank’s success to the leveraging of economies
of scale and said the sector has been successful in lobbying Kenya’s baking
regulators to allow for what he called an “agency model”. He
described the model as one which will allow virtually any storefront with a
cash register or credit card terminal to act as an agent for a bank by
performing some of the traditional banking functions of accepting deposits and
dispensing cash. “This is a great thing as it will save us a lot of
expenses”. Such expenses he said include the traditional brick and mortar
strategy that banks have employed for a long time.

In line
with his view that the traditional banking model has failed especially in Africa,
he foresees a business model that entails a high volume, low margin scenario
especially in developing countries “because in Africa many people have
very little money but do a lot of small transactions and as such we have to
accommodate that to keep them as customers, and the agency model and the
convergence of banking and telecoms will serve us well,” he told the
workshop. The cell phone boom in the country and the continent has created a
scenario that makes it possible for banks to tap into the unbanked as his bank
has done in the 25 years it has existed.

This
year’s US-Africa business summit, organized by the Corporate Council on Africa
(CCA), brought together over 1,500 leaders from the private and public sectors
in both Africa and the US. CCA is a membership organization of nearly 180 U.S.
companies dedicated to strengthening the commercial relationship between the
U.S. and Africa.