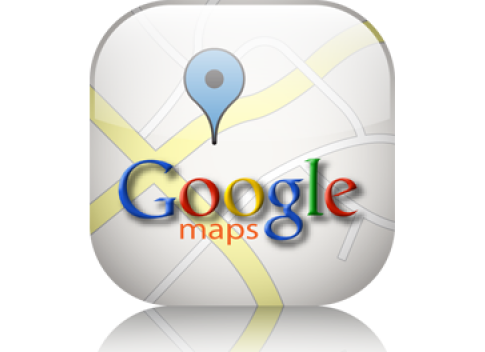 A  first for Africa

Editor’s note: The author first wrote this for his blog Whiteafrican.com. Republished here by permission.

Gone are
the days where you had to have lived in Nairobi for a couple of years before you
understood all the back roads and neighborhoods in order to get from one place
to another. Kenya has an advantage in the fact that the only non-sales office
in all of Africa for Google is here. When they create new tools, or customize a
feature from the developing world, for Africa they do it here in their own
backyard first. 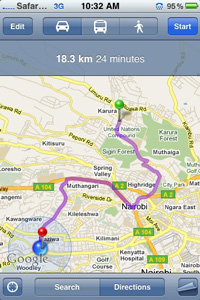 In December, Google turned on mapping directions for Kenya. Like me, most of the people who know Nairobi were shocked and didn’t believe it. Could this really work? It does, and it works well.

I’ve been testing it out for the last week to see what type of results I get, and I’ve been impressed with the results. Fortunately I have my iPhone with me, and it allows me to do things like challenge Google/Apple to find my current location and then give directions from that location to somewhere in Nairobi that I happen know every back road, alley and footpath between.

As omnipotent as Google seems to be, what they’re unable to do is track the vagaries of Nairobi traffic. So, as logical as the directions you get from Google might seem, they are not the best way to go much of the time. While they give accurate directions for new people to Nairobi to follow, they are also the “obvious” route and will cost you hours of sitting in gridlock while you watch the matatu’s (public minibuses) clog the road even further.

Lack of detail on the maps

Some areas, even large towns like Ongata Rongai aren’t even shown on the map. Below is the failure screen for getting directions from Rongai to Eastleigh. I had to go with Langata instead, as that was the next closest “town” in Google Maps. This pattern holds true for dirt roads and paths that are usable by vehicles, but which don’t show up on the map.

I’ve also seen this in regards to offices and buildings, where they are put on the wrong part of the road, sometimes off by a good half kilometer, as was my father’s office in Upper Hill shown below.

Anyone living or working in Kenya should buy a drink for every intern and Google employee who has done the manual work to get Kenya mapped to the level that it is. It’s an iterative process that only gets better as time goes by and more people work on it.
As Google states:

“This essential tool is by no means Google’s effort alone – we’re enormously grateful to Kenya’s active online cartographers who have helped us build these maps from ground up with the use of Google Map Maker, a tool that allows people to help create a map by adding or editing features such as roads, businesses, parks, schools and more.”

The directions provided by Google in Nairobi (I haven’t tested up-country) are adequate. They’ll get you to and from the locations in Nairobi that you need to go. You’re better off now than you were before, and as someone new to the city you’ll have a lot better luck with Google’s maps and directions than you’ll have with asking someone on the side of the road.

Erik Hersman writes on technology and how it impacts Africa on his blog WhiteAfrican.com.