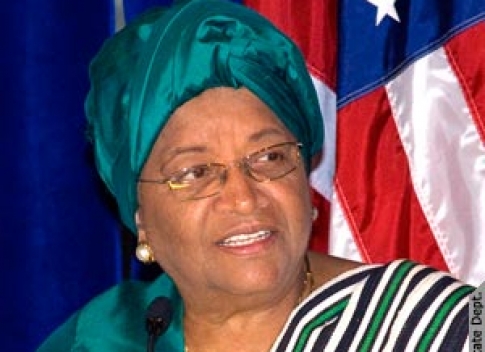 WASHINGTON – The Feed the Future initiative — which seeks to enhance food security and reduce hunger, poverty and malnutrition — is exactly the right program at the right time for Liberia, Liberian President Ellen Johnson Sirleaf said May 20, while also applauding the Obama administration’s strong support for the Global Agriculture Development Initiative.

“What is most appealing from the Liberian perspective about these initiatives is that they encourage the participation of key groups, including farmers, civil society organizations, women, and they also promote strong regulatory policies such as governance and accountability,” she told the Symposium on Global Agriculture and Food Security in Washington.

Sirleaf said Liberia is pleased to have been selected as one of Feed the Future’s 20 potential target countries and that it “will strive hard to achieve status as an investment plan country.” The other potential Feed the Future target countries are Ethiopia, Ghana, Kenya, Mali, Malawi, Mozambique, Rwanda, Senegal, Tanzania, Uganda and Zambia in Africa; Bangladesh, Cambodia, Nepal and Tajikistan in Asia; and Guatemala, Haiti, Honduras and Nicaragua in Latin America.

Sirleaf commended the U.S. Embassy and the U.S. Agency for International Development (USAID) teams in Liberia “who support our goals in the development of Liberia’s agriculture and rural sector in promoting sustainable peace.”

“We strongly believe that with our commitments, with our hard work, together with your continued support, we can indeed bring stability” to Liberia, she said. “We can bring prosperity to a nation once characterized as a ‘failed state.’ We can become a post-conflict success story, building upon our agriculture potential.”

Sirleaf, a former banker, chronicled the important role agriculture is playing in the development process in Liberia, a country that has been traumatized by years of civil war.

The Liberian leader told her audience she was dressed in bright green to denote the great agricultural potential of her nation.

“In 2006, Liberia started the long road back from a civil conflict that decimated the country’s infrastructure and institutions,” she said. The country’s development potential has also been hobbled, she said, by a population that fled to the urban areas during the unrest — leaving the land unproductive.

In the past four years, Sirleaf said, her government has made progress: restored economic growth to an average annual rate of 7 percent; tackled a $4.9 billion external debt; made strong advances in consolidating peace and national security; reactivated the country’s mining, agriculture and forestry sectors; promoted the institutions of good governance, including the rule of law; and rehabilitated infrastructure to extend basic services to the Liberian people.

Despite such progress, the “challenges remain awesome,” she said, and the nation remains “fragile in the face of raised expectations and the several stumbling blocks” in its path, such as the global financial crisis, which “has slowed the pace of recovery and reform.”

Poverty in Liberia, she said, continues to be the most significant determination of food access, even though some 70 percent of all Liberians depend on agriculture for their livelihoods. “Recognizing that agriculture growth is more effective in reducing poverty than any other effort in any sector, our government is placing emphasis on this strategic sector both in terms of exports and food security at home,” she said.

The immediate goal, she told her audience, is to revitalize operations and activities that contribute to sustainable economic growth and development to provide food security and nutrition and to increase farmer employment and income — all aimed as well at measurably reducing poverty.

Sirleaf said while her government’s commitment to agriculture is “unequivocal,” public financing of the sector is still “woefully inadequate,” with the share of the national budget allocated to agriculture still at only 2 percent.

“We are, nevertheless, intensifying our efforts to achieve the desired results,” she said. Her government, she added, has embarked on a “back-to-the-soil campaign” that has resulted in significant increases in food production, particularly in staples such as rice and cassava.

Rice production has increased from 85,000 metric tons in 2006 to more than 200,000 metric tons in 2009, a 43 percent increase. That increase, she said, has led the World Food Programme for the first time to purchase locally produced rice for use in the school feeding program. Additionally, Sirleaf said, more than 30,000 farmers have now been trained in new farming methods and some 15,000 vulnerable farmers and more than 100 farmer groups have been provided with seed rice.

Success in the agricultural sector will be even greater, she said, if farmers are able to make greater use of fertile lowlands to grow rice where yields are the highest and where up to three crops can be harvested annually.

At present, farmers are not able to make full use of the lowlands because of health concerns brought on by schistosomiasis and other waterborne diseases, which multiplied during the country’s long civil war, she said.

“It is very clear to us that agriculture has the potential to become a major source of employment — most especially for thousands of our citizens, women and youth, who as casualties of the war lack essential skills but who can learn to farm the land.”

Her government’s objective, she said, is to “consolidate them into a productive and dynamic entity for national development.” Creating jobs in the farming sector, she added, is one way to accomplish that aim.

The Liberian agriculture sector, she said, is transitioning from emergency status to that of a key development sector, which will include sustainability and improved livelihoods that are well integrated into private sector markets.

The private sector is playing a pre-eminent role in developing Liberia’s agricultural sector she said, while the government is charged with creating the enabling environment in which private sector–based agricultural development can flourish.

Feed the Future is a U.S. government development initiative based on partnership, not patronage, and seeks to coordinate the efforts of many U.S. government agencies to contribute to global food security efforts.

The Global Agriculture and Food Security Initiative is administered by the World Bank. The United States has donated $475 million to that program in concert with a host of other international donor nations.

At the Group of Eight meeting of major industrialized nations in L’Aquila, Italy, in July 2009, President Obama pledged at least $3.5 billion for food security. More than 1 billion people, or one-sixth of the world’s population, suffer from chronic hunger.