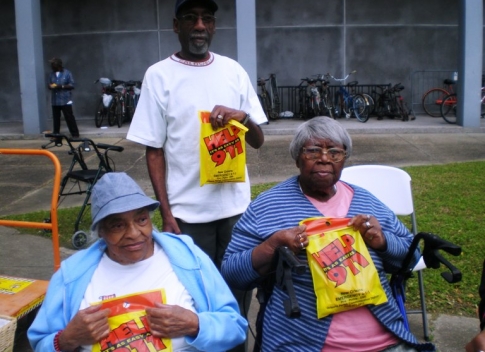 While Arizona is a hotbed for immigration issues, concerns about aging African immigrants and refugees in Phoenix don’t always garner the same attention as the much larger Latino population.

African immigrants residing in the Metropolitan Phoenix—many of them refugees resettled here by the U.S. government–are a compact pan-African group of less than 20,000, according to the 2008 American Community Survey. They enrich Phoenix culture from an impressive array of nations, from West Africa (Sierra Leone, Liberia and Nigeria to East (Sudan, Somalia and Ethiopia), and from the central continent (Democratic Republic of the Congo, Rwanda and Tanzania), to South Africa—plus many other countries.

Life in this arid new land is especially trying for many older African immigrants. They find themselves far from often strife-ridden homelands, unable to find work and facing barriers of language and mobility. Adding to their stress are daily confrontations with a generation of Americanized children, who seem to turn traditional values upside down.

Although immigrants constitute an underwhelming 4.3 percent portion of the total black population of the Valley of the Sun region, they continue to raise families, start businesses and establish themselves in Phoenix. They also face the daunting challenges of transportation, language and eldercare.

Among the African immigrants in the Valley, the main population increase has come from refugees escaping brutal circumstances at home. According to the federal Office of Refugee Resettlement, the overall refugee population in Arizona more than doubled from 2006 to 2009 to 4,327.

Refugees resettled in the Phoenix area are not only from multiple African countries, but include large numbers from Iraq and Burma, as well as other strife-torn nations.

The recession is having a strong impact on employment for Arizona’s refugees. Finding jobs for immigrants is a primary concern for the state-contracted refugee resettlement agencies, which bring a large portion of Africans to the Valley.

Only one in three of people in the refugee caseload entered the workforce in 2009, the lowest level in three years for the Office for Refugee Resettlement. Those who landed work received an average hourly wage of $7.17.

“Lost Boys” is the term for the generation of Sudanese refugees orphaned and dislocated by religious and ethnic conflict since the mid-1980s. Since 2001, the U.S government has resettled many of them to Phoenix and other American cities.

Dak said the center is examining whether to start a training program for stay-at-home seniors. “We want to get elders a daycare worker’s license, but with state requirements and liability, we’re still looking at how that will work,” he explained.

High unemployment among African immigrants and refugees also reflects their difficulty getting to and from work.

Stewart states that there have been great strides in affordable housing and that support for elders is particularly strong within the religious community. She stressed, “But without transportation, elders can become extremely isolated.”

The Phoenix Valley Metro light rail system, a positive step toward public transportation access, began in 2008, and is a positive step. But many Valley residents require two or three transfers to reach work or school.

For African elders struggling to learn English and faced with the prospect of waiting for buses during triple-digit summer temperatures, the simplest errand in Phoenix can be daunting.

The urban sprawl of Phoenix can intensify elders’ isolation, leading to discouraging circumstances and depression among older Africans. “Elders need a place to gather,” says Abdulmajeed Dere, a Somali businessman and former caseworker of 10 years in the Valley.

Seniors often find themselves relying on case workers, volunteers and their working adult children for tasks ranging from the mundane to the essential, Dere said. This creates considerable strain on families with a dependent elder in the household, he added.

“They want to visit each other,” Dere said of Somali elders. “The [culture] they come from is about sitting together. When they have to stay at home because their young don’t have time to take them back and forth, stress builds up.”

Dere knows of this stress first hand. His grown children attend Arizona State University and high school, while he and his wife manage a cafe in a plaza and a driving school. His typical work day, which runs from early morning until 8 p.m., leaves his mother, who is approaching her 70s, long periods to occupy herself.

The Somali community is concentrated on Phoenix’s east side, but Dere’s home is in Glendale, a long ride to the west.

Also, the strained economy in Phoenix has forced several potential gathering places to close. For example, the Somali Association of Arizona’s Hope Center offered a score of services ranging from job training to citizenship classes, until it closed its doors in 2006, due to a lack of funding.

When asked if elders are valued in the Somali community, Dere shrugged, calling the subject “a big challenge and messy.”

Often, he said, Africans recently immigrated to the United States discover that authority in the household is turned upside-down, in part, because of language difficulties.

Children, he said, usually adapt to American culture and learn English more quickly than their parents and grandparents. In a city with poor translation services in hospitals and schools, Dere continued, young family translators effectively become gatekeepers for their elders in accessing medical, legal or other services.

The result, Dere said, is to leave generations on either side of a widening cultural and digital divide. “Yes they can translate, but still a child doesn’t know about legal things or immigration law,” he noted.

Despite the difficulty for African elders, English classes could provide the positive community space older adults long for, if done the right way.

“Elders want to see people they are close to,” Dere said. He stated that while volunteer agencies and community colleges provide ESL classes, they design them for the whole community. Many older immigrants find those environments intimidating.

Dere emphasized, “Remember these are people who have never attended formal school.”

Besides needing more training capacity in ESL and other skills, older Africans could benefit from fewer barriers to become childcare workers. Arizona requires those qualifying for a daycare worker’s license to know English and be certified in cardio-pulmonary resuscitation.

Dak described the potential benefits of teaching a certification program to Sudanese elders that takes into account their learning styles. They would gain a greater sense of purpose, and relieve economic pressures on parents in their community struggling to make ends meet. “Do you know the (daycare) fees, if children are not picked up on time?” Dak laughs, shaking his head.

There are no easy answers for African elders in the Valley of the Sun, but efforts to meet the needs of this community group still persist despite the demanding economic obligations of working adults, and the dearth of funding available on the state level.