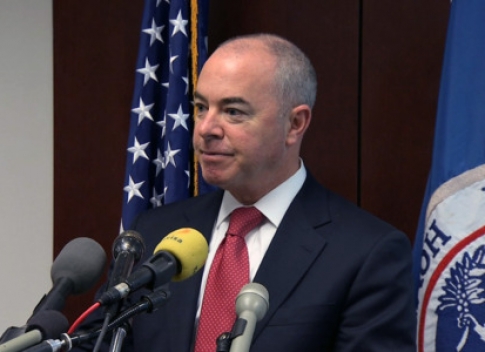 A rule change designed to decrease the time some undocumented immigrants spend away from their families could be implemented by the end of this calendar year, U.S. Citizenship and Immigration Services (USCIS) Director Alejandro Mayorkas said Thursday.

The policy would allow some undocumented immigrants with U.S. citizen family members to apply for a waiver from the so-called “three- and ten-year bars” from within the United States.

“We have committed to making it effective this year,” Mayorkas told reporters during a press conference to explain the agency’s strategic priorities for 2012. “I think we envision in the fourth quarter.”

The policy represents a change to existing immigration regulations that officials say prevent many people who are eligible for green cards through family ties from applying because doing so would subject them to a three- or ten-year ban from the United States.

Under current law, people who leave the country after being in the U.S. illegally for more than 180 days, are banned from coming back for three years. The ban is extended to 10 years if the person is present unlawfully for more than a year.

Existing regulations allow those individuals to circumvent the ban through a waiver if they have a U.S. citizen parent or spouse who would suffer “extreme hardship” upon their removal from the country. In order to apply for the waiver, however, they have to leave the country.

Without a guarantee that their waivers will be approved — and facing an average processing period of six months even if it is approved — many prefer to stay in the United States illegally, rather than take the risk of long-term family separation.

The proposed changes aim to encourage them to go through the process by giving them some indication of whether an approval is likely before they leave. A person applying for the waiver would still have to exit the country for a consular interview before the final adjudication, but the time he/she would have to spend away would be reduced to a matter of days.

The Obama administration first published a notice of intent to pursue a change in regulations in January. Mayorkas said Tuesday that USCIS will publish the actual proposal “imminently, in a matter of days or a week.” The public is then given 60 days to comment on the proposal, feedback that the agency will take into account in its final promulgation of the rule, expected to take effect by December.

Mayorkas also emphasized the agency’s efforts to strengthen initiatives to prevent fraudulent activity as a result of the new regulations.

“What we are seeing are cases of individuals who are misled by unscrupulous practitioners, or ‘notarios,’ who try to take advantage of the rule that is not yet effective and is only in proposed form, and not even yet in proposed form,” Mayorkas said. “We’re starting to see some victimization in the shadow of what is a tremendously important rule for the public.”

When the change was first announced in January, congressional Republicans, including Rep. Lamar Smith (R-Texas), accused the administration of putting the interests of undocumented immigrants ahead of those of legal residents. Smith also characterized the change as a “back-door amnesty” for millions of people.

Mayorkas said the changes fall within the law and are merely intended to minimize the hardship of people who would be eligible for the waiver anyway. He added that the agency does not have an estimate of how many U.S. citizens, or how many of their undocumented family members, would benefit from the change.

“What this proposed rule does, is accomplish the law’s purpose more effectively and more efficiently. Nothing more and nothing less,” he said. “The law provides that a United States citizen who would suffer extreme hardship by virtue of separation from his or her children or spouse, may obtain a waiver to alleviate that extreme hardship… and the law also provides that before that waiver is granted and the individual is admitted to the United States, the individual must depart the United States. Those basic tenets of the law, both its purpose and its requirement, are fully realized in the proposed rule that will be published shortly… And so I don’t believe that criticism is meritorious.”