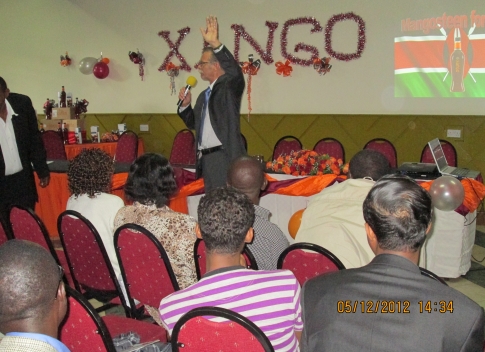 The Network Marketing Company which is also Direct Selling or Multi-Level Marketing brings the most powerful system of free enterprise in our modern world. Through distributors it’s entering the East African market through a user turned evangelist of its product, Dr. Karl Anderson, a prominent Twin Cities dentist.

Dr. Anderson has teamed up with a group of Kenyan Americans to introduce the  product and business opportunity to the East African region with a planned business presentation in Nairobi on November 9 at the SixEighty Hotel. Xango relies on the thousands of its independent distributors worldwide to distribute its product and East Africa will be no exception, according to Dr. Anderson.”We therefore need to connect with East Africans here in Minnesota and back home to launch this opportunity there,” he said.

His story with Mangosteen juice goes back 7 years. After suffering from osteoarthritis compounded by a back injury for 15 years, he set out to use his medical  training to find a natural remedy to the painkillers he was constantly on, Vioxx and Celebrex. Once he determined that the scientific research validated  that the Mangosteen extract was rich in what in the medical field are called  Cox 1 and Cox 2 inhibitors involved in pain relief, he was sold. Vioxx and Celebrex was out and was replaced with the recommended two ounce dosage of the Mangosteen Juice. “My stamina and improved sleep was amazing,” he says.

As he continued to use Mangosteen, close family members were also drawn in. His mother-in-law, a diabetic and insulin dependent for 10 years started using Mangosteen and after a month of usage her doctor withdrew her insulin treatment proclaiming he had not seen her sugar levels so low in years.

Armed with those personal experiences, Dr. Anderson has taken to sharing with his patients willing to listen the benefits of Mangosteen juice. One such patient is Kenyan born Minnesotan, Mutune Mutisya. His mother, suffering from osteoarthritis had been complaining of severe hip pain for a long time. Like many Africans Mutisya and his mother have a preference for natural remedies and was drawn in instantly when Dr. Anderson introduced him to Mangosteen.

“Dr. Karl gave me a bottle and told me to have my mother drink 30 mls everyday. After a month, her hip felt better. She stated she felt physically more active  than she had felt for a long time. I have started drinking Xango myself and I can feel the health difference immunity wise,” says Mutisya who quickly became a convert and started introducing it to his friends. “I became convinced that this product could help many people including my fellow Kenyans back home and here in Minnesota.”

Mutune Mutisya and Dr. Anderson would like to hear from East Africans in Minnesota and back in East Africa that would like to be distributors or be part of the business presentation on November 9th. They can be reached at 651-252-1288, or e-mail mutunemutisya@gmail.com or  drkarlanderson@gmail.com.