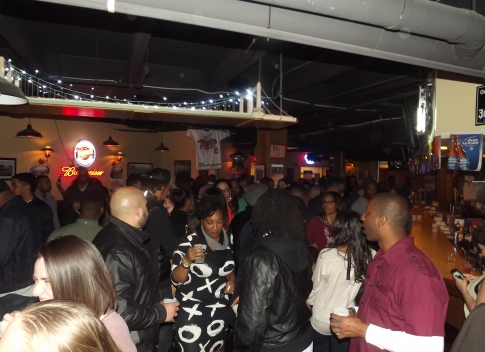 Recently on a local sports talk radio station the hosts were lamenting on the poor play of the Timberwolves and began discussing what they called an overall lack of talent.

The radio pundits discussed the play of Kevin Love, Ricky Rubio and others and basically came to the conclusion that the team needed to attract top-level free agent talent to play in Minnesota if it was to be truly competitive in the NBA. Then one of the commentators remarked that he spoke with several players around the league and the general consensus was that the Timberwolves could not attract top free agent talent because of the Twin Cites nightlife – or lack there of.

With 78 percent of the league’s players being African-American, it’s a safe bet to say that the players questioned were those with a bit extra melanin in their skin. And while the scene in downtown and Uptown Minneapolis is a bustling one on the weekends, the vast number of hot spots are teeming with 20-something and 30-something yuppies and the crowd, while welcoming, is far from diverse.

The Timberwolves may not be the only ones struggling to recruit and retain top African-American talent to the area. Many African-American professionals cite the lack of social activities geared towards a progressive Black audience as a major source of discontent with Twin Cities living. Some cited it as a reason for ditching the Twin Cities for other major urban enclaves.

“Minnesota was always a short stay for me because I only moved for a job assignment so I knew I’d (only) be there two to three years,” said Leah Stone, who worked here for Proctor & Gamble and who now resides in Cincinnati. “However, I will say, when I was there (Twin Cities) I traveled out of town a lot because the social circles seemed so small and there wasn’t a lot of variety in what was going on.”

Stone said that although she was able to enjoy several concerts that came to town, the scene for Black professionals was pretty stagnant.

“I was only there two years and (I felt like) I met every Black professional,” said Stone.

Stone is not alone in her desire to vacate the area for cultural reasons. April Preston, a native of St. Paul, recently packed up, leaving the Twin Cities for the East Coast to take up residence in Washington, D.C. Preston said while not the sole reason, the area’s lack of a consistent social scene for African-American professionals played a role in her decision to relocate.

“After a year or two of going out I kind of got bored,” said Preston, who returned to St. Paul in 2005 after completing college at Grambling State University in Louisiana. “It was the same thing – the same people. (Minneapolis nightlife) is missing variety.”

“My friends and I always joke that if we were white it’d be great because there is stuff for them everywhere,” said Preston, who said her inner circle would attend popular venues that cater to a yuppie clientele such as Crave (downtown) and 7 Sushi. “Crave was cool, but they wouldn’t play our music, so you had to bring your own crew to enjoy yourself.”

Nick Hooks, an event producer with The Cool & Co. and Playfessionals lays blame with the area’s top employers for not promoting social diversity.

“Retention (of African-American professionals) here is horrible,” said Hooks. “Corporations recruit these African-Americans from the South and move them out to the suburbs and all they know is their job. Promoters such as myself and others (who cater to Black professionals) are really a part of these companies’ retention plan and they don’t even recognize it.”

Hooks said another issue is the lack of African-American club owners in the area.

“As a Black promoter it’s the hardest thing to find venues to let us in,” said Hooks, who said many club owners cannot decipher the difference between younger, more rowdy African-American club goers and the professional African-American patron. “I went to one event center and the woman there said we don’t host those kind of events without even hearing me. We had a white female we work with go in with the same proposal and then she was all ears. There’s just a lack of understanding.”

Preston, who said she’s proud to claim her St. Paul roots, feels without change the area will continue to see an exodus of African-American talent.

“I have a lot of sorority sisters who were at Target and they were out the door quick,” said Preston. “(Black professionals) are in these corporations (in the Twin Cities) to get it on their resumes and they’re out.”