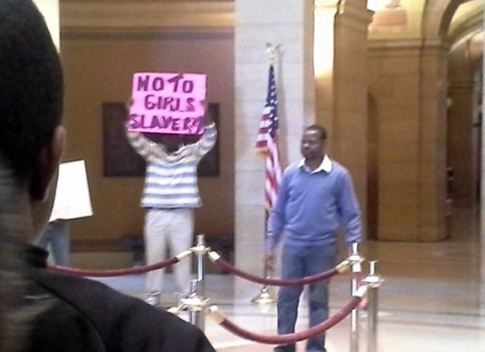 A May 10 rally condemning the abduction of more than 200 students from a school in Chibok, Nigeria brought members of the state’s Nigerian population and the broader African Diaspora together in St. Paul. Held in the State Capitol rotunda, speakers at the rally voiced concern for the victims, questions about the Nigerian government’s level of accountability, and the potential role the United States could play in securing their return.

President Goodluck Jonathan of Nigeria remains subject to international criticism for a response perceived as delayed and lackluster. Protests held by the parents of the abductees have fueled into a potent international campaign spanning social media and many public demonstrations.

“We strongly urge the United States government to act boldly and without haste to return these girls to safety,” said Bravada Garrett-Akinsanya. “Today we stand here with the courageous acts of those girls’ mothers and fathers, who have placed themselves in positions of immanent harm, danger and risk for retaliation in order to secure the safe release of their daughters.”

Boko Haram, an Islamic sect active in Nigeria since 2002, took responsibility for the April 14 kidnappings. According to a 2012 report by the U.S. Institute of Peace, Boko Haram wants to topple the country’s federal government and found a state ruled by Sharia law.  The organization has taken responsibility for numerous church bombings and other acts of terrorism in order to realize its goal, the report said.

Garrett-Akinsanya, a psychologist whose specialty is child welfare, said that that Boko Haram’s intent is to illicit hate and fear. Such psychological warfare must be countered with love and courage, she said.

Demonstrator Titus Jaafaru, said he sees the international outrage that has followed the abductions as critical to pushing Nigeria’s government and its allies to act. He said that the rally is a part of what those who have emigrated from Nigeria’s northern region have tried to do in the past.

“Some of us have gone to Washington D.C. I was one of those who went to Hillary Clinton’s office to try to bring to their attention what has been happening.” Jafaaru said. “That was three years ago.”

In a letter to President Barack Obama, Minnesota Sen. Amy Klobuchar and Illinois Sen. Mark Kirk recommended actions the United States could take to help locate the missing girls. The May 6 letter offered three ways similar mass abductions could be prevented in the future.

The first action was to seek a United Nations Security Council resolution to condemn the attack and appeal for all members’ countries to help locate the victims. The second would push the U.S. to provide intelligence, surveillance and reconnaissance to support the search for the missing students, as was used to root out the Lord’s Resistance Army in central Africa. Lastly, the senators wrote that the U.S. should call upon the U.S. Agency for International Development and the State and Justice Departments to enhance the capacity of regional authorities to protect children and combat human trafficking.

Fatima Lawson, vice chair of the Minnesota Institute from Nigeria Development (MIND), said that the fate of the kidnapped students touched her especially deeply. She had been forced to withdraw from school to get married, Lawson said.

“Nigeria’s problem is everybody’s problem. It is a shame that something like this is happening to us,” Lawson said of her homeland, which is Africa’s most populous nation and a budding economic power. She appealed for further action to ensure what was said in the rotunda was more than mere rhetoric.

“There is a great need for the international African Diaspora to collaborate beyond religious, ethnic and cultural distinction,” Lawson said. “This inhumanity against humanity is breeding the wrong culture for Africa. For this, all Africans must stand together.”