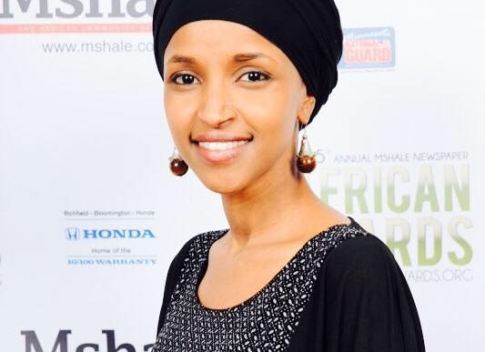 Should she be elected, it will be a historical win, making her the first woman from the Eastern Africa region to be elected to statewide office in the United States.

Omar said in an interview with Mshale that she is ready to speak to the public about controversies surrounding her candidacy and the reason why she is running for office against her DFL opponents, Mohamud Noor and Rep. Phyllis Kahn. Kahn has represented the area since 1972 and is the longest serving Minnesota lawmaker.

60B, a predominantly Democratic district,  includes the Cedar Riverside and Seward neighborhoods, home to a large Somali community, in addition to Nicollet Island, Prospect Park, Marcy Holmes and the University of Minnesota Minneapolis campus (home to Carlson School of Management and the U’s law school).

Omar’s interest in politics was piqued by her close relationship with her grandfather. Their conversations revolved around activism and policy work.  “Being able to dream about the prosperity for your children, having access to economic sustainability and equitable housing were some of the conversations I had with my grandfather, said Omar.”

Omar grew up in the Cedar-Riverside neighborhood and has actively advocated for the community. She continues to be identified in political arenas advocating for issues concerning equity. “I grew up in this area, she said.”

“I understand the growing need in all corners of this district. I have a feeling that I am the right candidate.”

Omar will now face off her fellow DFLers, Noor, last year’s returning challenger against incumbent Kahn. Many in the community have been wondering why Omar is running against Noor when she publicly and vocally supported his campaign last fall. Omar contends however that she was a neutral representative of the DFL party during the 2014 caucus, one that erupted into violence leaving Omar with multiple injuries. “I did not support Noor after the convention was over,” she said.

Omar, who seems baffled by public inquiries about why she is challenging Noor this year, says she “believes in a free democratic system that allows people equal participation in our society.”

She says she supported Noor because she wanted to see change. She thought Noor was the change for House District 60B.  “I am now running because I don’t see that urgency from him or from the other opponents anymore.” Omar said that she considers herself a “bridge-builder”.

“I got tired of wishing for that perfect candidate. I got tired of having conversations with people on what is really important,” she said.

Omar said she stopped rallying behind political campaigns and decided to run for office. “If you are willing to ask people of something, you should be willing to do, “she said with her trademark beaming smile.

“Noor and I are still good friends. I have reached out to him numerous times before declaring my candidacy. I have also reached out to many state officials including Phyllis Kahn.”

Omar said that she is not fond of conversations about how she shouldn’t run against Noor or vise versa. “I hear a lot of people say only one of you should run. I don’t advocate for such conversations, Omar said.” Omar said that she wants those with the negative mindset to know that she and Noor are not detrimental to their political race.

Omar lights up when asked about the multi-ethnic approach she plans to include in her campaign kick off on Tuesday. “The plan is to talk about our commonalities. What connects us is that we all want to survive and thrive.”

Omar said that she is running a unique campaign and hope to use some of that uniqueness to attract people and to create relationships.

“My campaign is fueled by students and even my children,” she said.

Omar, a mother of three said that her two oldest children (Son Adnan and daughter Isra) are active participants in her campaign. “My son has attracted so many of his friends’ parents, she said. I get asked to have coffee meetings because of my son.”

Omar said that her little one doesn’t understand what her mother is doing, but her daughter who also has ambitions of being a politician plays many roles in her mother’s campaign. “My oldest daughter is my door knocking buddy. She is also my advisor,”she said.

Ilhan Omar will kick off her campaign today (November 10) at the Mixed Blood Theatre in Minneapolis at 6pm. The address is 1501 S. 4th Street, Minneapolis, MN 55454.

Editor’s note: We have a request out to the Mohamud Noor campaign for an interview and will publish it as soon as it is completed.