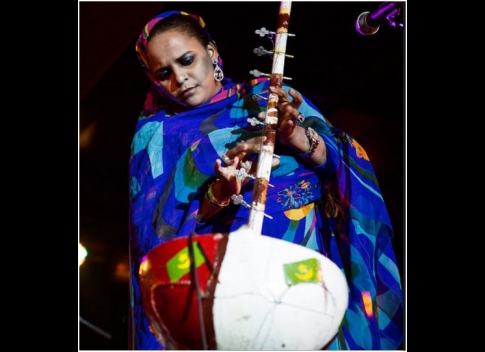 The Twin Cities has finally gotten lucky and will play host to the heir of a Mauritanian Griot lineage stretching back untold generations.

The Cedar will host Noura Mint Seymali on Friday, February 19 for one show.

She is the daughter of Seymali Ould Mouhamed Val, a revered scholar-musician credited as the first person to apply written notation to folk music in Mauritania. Mint Seymali has taken the musical world by storm with her cosmopolitan mix of funk bass, drums, and psych guitar played by her husband and fellow griot, Jeich Ould Chighaly.

She began her career at age 13 as a supporting vocalist with her step-mother, the legendary Dimi Mint Abba.

After two albums, Tarabe (2006) & El Howl (2010), released locally in Mauritania and years of experimentation adapting Moorish music to various pop formations, Noura Mint Seymali’s current band is a concise return to the roots, a light formation led by the “azawan,” a word in Hassaniya that refers to the collective ensemble of traditional instruments; the ardine, tidinit, guitar.

The Cedar concert is in partnership with The Walker Art Center and Mshale as the media sponsor.

$22 for Walker members (purchase through the Walker)

In person: From a Cedar volunteer in the front lobby during events (no fee; cash, check, credit card), Depth of Field (no fee; cash or check only), or Electric Fetus (approximately $2 fee)