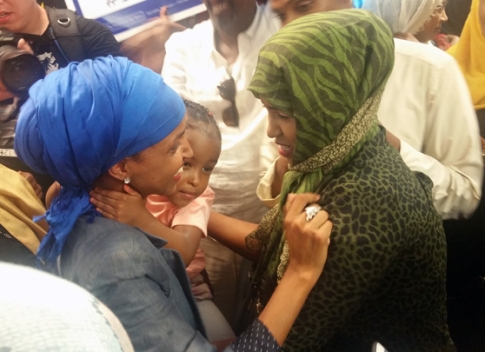 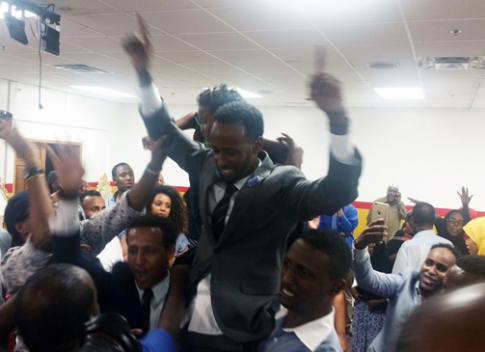 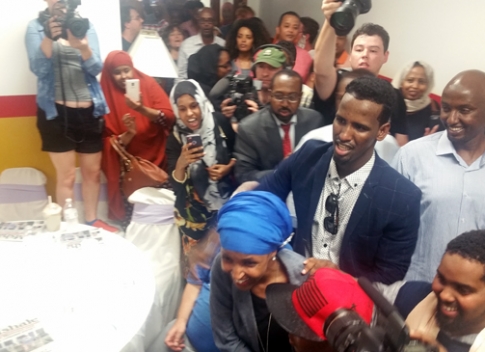 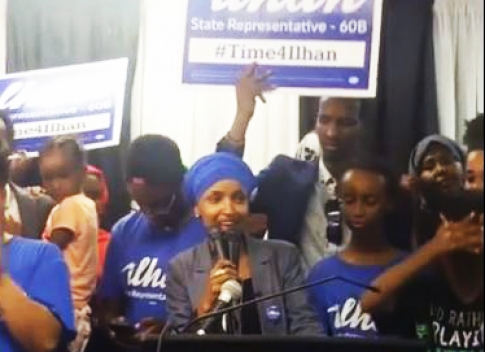 (Important Disclaimer: Mshale Founder and Publisher and author of this story is one of Ilhan Omar’s campaign fundraisers with the last fundraising event organized by him being hosted at the law offices of Paschal Nwokocha co-hosted in tandem with the latter, former Minneapolis Mayor RT Rybak and Godson Sowah). The Ilhan Omar campaign Field Director, Stacy Rosana, has a family relation to Tom.

MINNEAPOLIS – A multiracial coalition of African immigrants, liberals and university students helped make history in Minnesota on Tuesday when they carried Somalia-born Ilhan Omar to victory in the hotly contested Minnesota House District 60B primary and effectively ending the career of the state’s longest serving legislator, Phyliss Kahn, who has been in office uninterrupted since 1972.

The victory positions her to be the first Somali-American legislator in the country.

District 60B which includes a section of downtown Minneapolis starts south of I-94 in Minneapolis and goes north to Hennepin Avenue and terminates east at the border with the city of St. Paul.

The District which is heavily Democratic makes Omar the presumptive Minnesota House representative for 60B come November, barring any major surprises from the Republicans as historically, the Democratic nominee or endorsed candidate is a shoo-in for the seat. In the Republican side, Abdimalik Askar, also a Somali had no opposition as he won 100% of the votes or 56 votes. Ilhan Omar and Abdimalik Askar will face each other in the November general election.

Omar was one of two high-profile Somali candidates that were seeking to dislodge Kahn in 60B. Omar has been the Democratic Party favorite, having come close to clinching the nomination at the DFL nominating convention in April (in Minnesota, the Democratic Party in the state is referred to as the DFL – Democratic Farmer Labor). At the convention, Omar fell short by 11 votes to clinch the nomination outright, forcing the party to hold Tuesday’s primary. The nominating convention outcome embittered many in the community with most of the anger directed at fellow Somali Mohamud Noor who many opined should have thrown his support to Omar to enable her to avoid the primary.

Her father two weeks ago at a fundraiser organized by the African business community said the primary could be a blessing “as it will make her tougher and she will appreciate it Omar.”

On Tuesday Omar garnered a convincing 41% of the votes cast while her two challengers received 29% each.

Prefacing her remarks with “Yes we did,” an emotional Omar who wiped away tears said “Tonight we made history.”

She went on “Tonight marks the beginning of the future of our district, a new era of representation. Tonight is about the power of you.”

Ahmed Ismail Yusuf, author of the much acclaimed book “Somalis in Minnesota” was among those at the victory party for Omar. “I don’t even know why we have this primary, it should not have come to this,” he complained loudly as he awaited results. Located later after the results were announced, he smiled broadly, not uttering a word.

Omar and her family fled Somalia when she was 8 and they spent four years in a Kenyan refugee camp before finally finding their way to Minnesota.

She was policy Aide to Minneapolis City Council Member Andrew Johnson, one of her early backers when she announced her candidacy.

“This is history,” Habon Abdulle, executive director of Women Organizing Women (WOW) said during an interview at the Omar victory party after the results were announced. Abdulle decried the misogyny directed at Omar. “They kept diminishing her like she cannot do it, well the people have spoken,” she said.