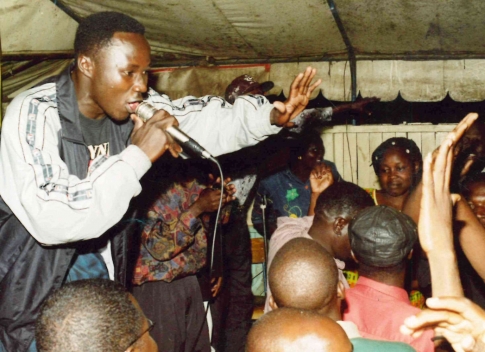 On the one hand, FLEE’s maiden release seeks to revive and honor benga in an era of disposable music experiences by highlighting the genre with stories, recollections, analysis and socio-political history that even a keen African music fan may not be familiar with. On the other hand, the project seeks to connect the past with the present, by presenting just three (four in the digital release) carefully selected classic benga songs, first in their original form, and then “edited” by cutting-edge producers in Germany, England and Finland. The result is FLEE Issue No. 1: Benga Music, A Signature Genre from Kenya.

The name FLEE derives from the French phrase fuite en avant, roughly “to forge or escape ahead.” The phrase seems to capture both FLEE’s retrospective and future-oriented impulses. FLEE is the brainchild of Alan Marzo, Olivier Duport and Carl Åhnebrink, all of whom possess master’s degrees, not in music, but in international relations and politics. Speaking over Skype from Berlin, Duport explains that the project grew out of conversations with Marzo. “We always had an interest in how soft power, culture, was shaping international, geopolitical relations.” The choice of music as a focus emerged naturally. Marzo produced music on the side. Duport’s father was an avid vinyl record collector, and he had grown up hearing stories about Nigeria’s Fela Kuti and other international artists. He notes, “Music is one of the most global forms of art. It was the one that seemed the most relevant, and we thought it would be interesting to make this bridge and this connection using music.”

These producers were well aware of the potential pitfalls. Duport says, “We were reflecting on how music consumption these days is going in the direction of streams, and how superficial it is becoming. We were disappointed by the lack of context given by so many projects these days, especially when we came to world music, as it is unfortunately known.”