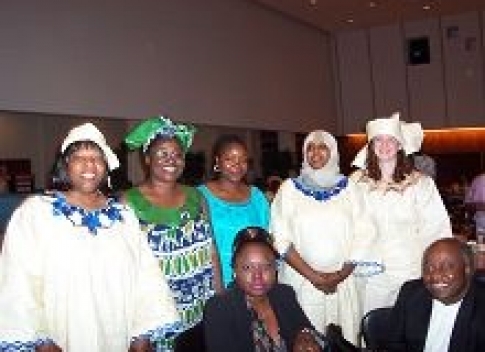 Outdoor temperatures soared to record-breaking levels Thursday, June 23rd. But the heat, held in check at the North Star Ballroom on the St. Paul campus of the University of Minnesota, did not weaken the enthusiasm or energy of Minnesota African Women’s Association as they hosted their second annual fundraising dinner to a crowd of over 200 people.

“It was a huge success. The girls enjoyed it, our supporters saw…that MAWA is doing a great job filling a need,” said Ms. Nyango Melissa Nambangi, MAWA founder and Executive Director.
This late afternoon affair provided information to MAWA supporters as well as the community at large about MAWA’s programs. In particular, the AGILE series was highlighted, using the participants as both hostesses and entertainers in the form of dance and spoken word performances.

AGILE, African Girls Initiative for Leadership & Empowerment, also added vivid color to the event thanks to three women tailors in Africa who created 75 dresses, Aso-ebis, for the participants of AGILE to wear at the occasion. Keynote speaker for the event, Judge Beatrice Beatrice N. Ntuba, traveled from Cameroon to share her experiences as a judge and leader in her West African country. The Honorable Judge Ntuba spoke of archaic beliefs still held in pockets across Africa regarding females and education.

She relayed two hypothetical scenarios, one in which a 13 year old girl is married off as the third wife of a much, much older man, who then goes on to birth over seven children, caught in the desperate cycle of poverty and illiteracy. The second scene conveys the story of a young woman with a much brighter future, acquired through delayed marriage and equal education on par with her male counterparts. Still, “Jane” encounters sexism in the workplace. The third possibility, which Judge Ntuba advocates, is one of both education and enlightened, non-sexist views of women in general, and of Cameroon women in particular.

Judge Ntuba compared the mêlée of today’s African woman with the struggle American women faced in the 1920s as they sought to gain the right to vote. Judge Ntuba said, “there is a lot being done by the government (of Cameroon), though it is timid.”

Judge Ntuba went on to encourage the audience, “as a gender, unity is strength. When you empower other women, you empower yourselves, globally. My fervent hope is that we shall sing a new song…skeptics may call it Utopia, but the world will be a better place to live, for even the men.”

To the idea of reformed gender attitudes, a clip of Cannes Film Festival Prix Arts et Essai winning documentary, Sisters In Law, was shown. The film follows Judge Ntuba as she works for gender parity in the workplace, in schools and at home. It is a strong documentary with hard-hitting, raw scenes showing women struggling against their spouses or law agencies as they seek justice and equality.

Food, music, dancing and merriment consumed the rest of the evening. Of special note was the fashion show put on by the six clubs of AGILE. The girls, originating from Liberia, Somalia, Ethiopia, Oromia, Nigeria, Cameroon, Sudan, Kenya, Uganda, South Africa, Sierra Leone, Ghana, and Togo, wore their specially made aso-ebis, identifying the family groups of their homelands.

Oprah Winfrey once said, “Every day brings a chance for you to draw in a breath, kick off your shoes, and dance.” And dance they did. Girls danced in Congo fashion, gyrating their hips as if they were double jointed. The pivotal movement crawled up their bodies to their shoulders until one limber dancer’s energy all focused on her neck and head. The appreciative crowd handed out paper money as is the custom by pressing it to the dancers’ foreheads.

Gladys and Co. provided a catered meal with entrées and hors d’oeuvres reflecting some of the 250 tribes of Cameroon as well as more typical American fare. Vendors included an exhibit by the YWCA, which promoted a program to train women of color to serve on nonprofit boards, and a textile table selling clothing and other accessories produced by a tailor company, Domoo Africa, and managed by Senegalese artist and child activist, Janette Sall. Diana Hawkins of Time Warner cable documented, on film, part of MAWA’s fundraiser, as well.

The evening ended while still early, giving patrons plenty of time to wander off in clusters and continue their conversations elsewhere. Overheard on their way out of the St. Paul Student Center, a young member of AGILE said to a fellow dancer, “next year, Melissa (Nambangi) said we’ll have the boys dance, too.”

But according to Nambangi after reviewing the event’s expenses and assets, next year’s dinner is not so certain. Generating financial support from the people who utilize their services has been an on-going point of consternation for MAWA. “There seems to be an expectation from many that whatever we do should be free,” said Nambangi.

And while MAWA generates funds from many organizations such as the Bush Foundation, Greater Minneapolis Council of Churches, Sheltering Arms Foundation, and the DHS Refugee Program Office, among others, “we do not yet have the kind of funding that can permit us to make such an event free,” stated Nambangi. This mindset of entitlements or handouts held by many who enjoyed MAWA’s fundraiser dinner, “is a huge disappointment,” added Nambangi, “it’ll make us think twice about how or if we would have another such event next year.”

Of the 200 persons in attendance, nearly a quarter of them declined to pay the suggested donation of $20. As further proof of the inability or reluctance to commit to monetarily supporting MAWA, there were only two bids placed in the silent auction. Two baskets handmade by Kwazulu women, a banana leaf wall hanging, a huge batik, a Maasai Suka blanket from easter n Africa, and other impressive items were all passed by, left for another, one would hope, more successful fundraising.