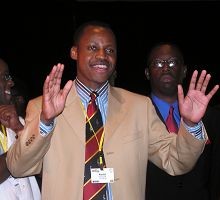 Abdul Kimbugwe is the new Ugandans in No. America

2005 Genge US tour kicks off in Minneapolis

On Saturday September 10th, fans streamed into Blue Nile in Minneapolis to get a live taste of ‘genge’ music, from one of its pioneers, Nonini in his first ever US tour.

Swallehe Msuya - September 1, 2005 0
The Igbo community in Minnesota with their invited friends celebrated their 12th annual Igbofest on the open grounds of the University of St. Thomas at St. Paul on Saturday, August 13.

Nelima Kerre - Mshale Staff Writer - September 1, 2005 0
“It still seems so unreal”, said a well-poised Syna Winford three weeks after beating six other challengers to win her first beauty pageant. The 24-year old Monrovia native, who has lived in the United States with her family since she was two, heard about the Miss Liberia Minnesota Beauty Pageant from Pageant director Antoinette Wilson and friend Theo Morgan of T and J Marketing, the pageant organizers.