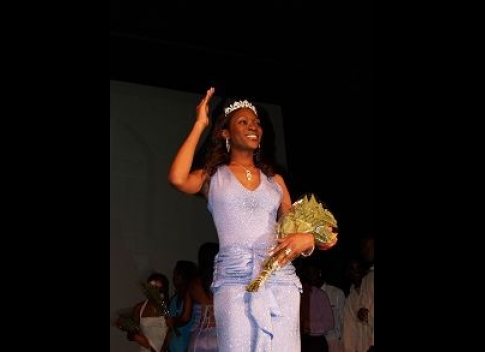 “It still seems so unreal”, said a well-poised Syna Winford three weeks after beating six other challengers to win her first beauty pageant. The 24-year old Monrovia native, who has lived in the United States with her family since she was two, heard about the Miss Liberia Minnesota Beauty Pageant from Pageant director Antoinette Wilson and friend Theo Morgan of T and J Marketing, the pageant organizers.

Syna moved here from Florida, where she did her freshman year of college and will be enrolling at Augsburg College this fall to study psychology. Being here from such a young age means that Syna’s firsthand information about Liberia comes from family pictures and stories and she readily admits that having lived out of her home country for so long has made her somewhat ‘Americanized’. Moreover, scheduling conflicts have prevented her from visiting home with her parents, though she is hopeful about going home sometime soon. Until then, she has embarked on a mission to integrate into the Liberian community here and it is within this context that she registered to participate in Minnesota’s fourth Miss Liberia Beauty Pageant.

Antoinette Wilson says that at its conception, the Miss Liberia Minnesota Beauty Pageant’s sole purpose was to encourage young Liberian ladies to realize their self-worth, and maintain a positive attitude towards education. Now, as one of larger social gatherings for Liberians, T and J may have to broaden the goals of the event. Ideas in the pipeline include, ‘Mr. Gentleman’ (the male version of Miss Liberia) among others.

Syna recalls the thrill of being in front of over 700 guests and not to mention the four judges. The judges, who hailed from diverse communities and artsy backgrounds, included a former beauty pageant. They principally focused on the contestants’ body posture, talent and intelligence. Though Syna admits to being a bit shaken during the talent section, she had already told herself that no matter what happened she would always be a queen in her own eyes. Undoubtedly it is this combination of self-assurance and eloquence that enabled her to give a great interview and ultimately secure the crown.

At the national Miss Liberia USA Beauty Pageant she did not make the top five, but enjoyed the experience nonetheless. She remarked that for someone who had never been to Philadelphia it was a rare treat to tour the city’s historical sites in a horse and carriage ride. Proceeds from the event will go towards youth community events and prizes for the contestants. Syna was awarded a semester’s worth of tuition and a $1,000.00 cash prize. The first runner-up and second runner-up received cash prizes of $300.00 and $200.00 respectively and all the contestants were given a bottle of perfume.

As victor, Syna is obliged to participate in local community events organized by groups, such as the Organization of Liberians in Minnesota (OLM), and collaborate with Miss Liberias from other states during national events. Her personal platform however, is the empowerment of young women. She plans to visit high schools and speak with young women especially about the importance of real beauty.

To young Liberian girls aspiring to be beauty queens she articulates, “Being a queen is not all about looks carry yourself higher, be active in your community, stay in school, stay positive, stay strong and keep close to your family.” To African women she says, “Open your mind, live through your culture and other cultures.”