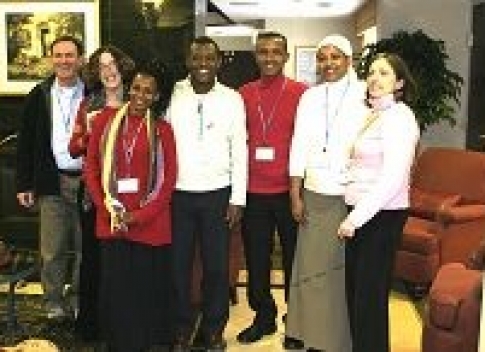 Four Ethiopian Jews from Hadera accompanied by two officials were in Minnesota during Thanksgiving Holidays to show gratitude to their partners – The Minneapolis Jewish Federation – for assisting them settle in .

Speaking in Hebrew through an interpreter, Abeba Adrgall, Zehava Zamena, Erez Masala, and Mordechai Mevrat told this report at the Spring Hill Hotels at St. Louis Park that they came to Minnesota to thank the Jewish Federation for assisting them fulfill their long term dream of integration into Israel society.

Under the banner of PACT (Parents and Children Together), a unique partnership has been forged between the Minneapolis Jewish Federation and the city of Hadera & JDC in which over 740 Ethiopian Israel children and parents have benefited from PACT and PACT plus programs. The goal has been to open doors of opportunity and offering an equal chance of success for Ethiopian Jews in.

officials namely Abi Ofsten and Yehuda Zusman. They told this reporter that in the assimilation process of Ethiopian Jews in , emphasis is placed in providing quality education, language skills and assist in career development.

Proper grooming is done from early childhood: “from pre-school to 10th grade, we have compulsory education, followed by high school and college education accompanied by military training.” They said at Daycare Centers, kids are helped with promoting a sense of balance, stimulating curiosity and refining gross and fine motor skills as well as develop hand-eye coordination. From age three to six, children are taught reading skills followed by science enrichment programs, where Hebrew literacy with culturally sensitive literacy enrichment is emphasized.

. They traveled with very little earthly possessions and with different levels of education background and even with little or no knowledge of Hebrew. The PACT / HADERA partnership, now entering its sixth year has tremendously assisted the new-comers to join the mainstream of the bigger Jewish community in .

Explaining the history of Jews in , the visiting team said there were two legends. One claims that they were one of the “lost tribes” that left through the and traveled along the Nile to settle in . The other legend claims that the beautiful Queen of Sheba from set out on a mission to visit King Solomon of in the year 1,000 BC. She had a relationship with the King and when she returned to

, she was pregnant with Solomon’s son, Menelik 1 who became the first Emperor of Ethiopia. The last King of that dynasty was Haile Sellasie (Lion of Judah) who reigned from 1930 to 1974 when he was overthrown by a military dictatorship led by Mengistu Haile Mariam.

Mengistu who tried to introduce communism to

was overthrown by a counter-coup that brought Meles Zenawi, a Tigrinya soldier to power. Mengistu lives in exile in . today has three major tribes: the Oromo, Tigrinya and Amharic – representing the major languages spoken by about 60 million people of that country.

River system; with ties of kinship to Indo-Persian-Arab races. Ancient Ethiopian Jews (Falashas) had always entertained the dream of someday linking up with other Jews in which became a Jewish state in 1948.

Speaking about tensions between Palestinians and Jews in the Middle East, the visiting Ethiopian Jews recognized that

Jerusalem was a holy city to Muslims, Christians and Jews. They affirmed that the three faiths should live in peace but “due to terrorism, it is a shame that we have not yet found common ground.”

Commenting on how has managed to convert desert country into arable land, they replied “it has been done through hard work, faith and wisdom.”

Asked if they would have opted to relocate to the instead of with all its tribulations, they gave an emphatic and categorical answer: “Our dreams and optimism for the future lie with . Jews belong to only one country – . We have no desire to go anywhere else.”