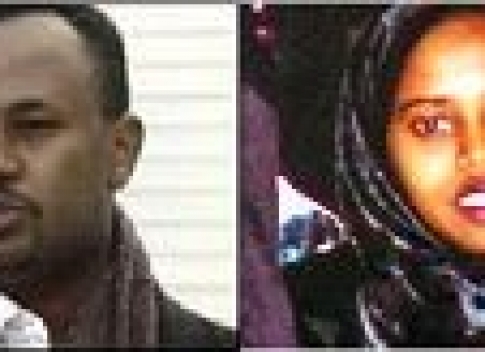 Lul Ibrahim, a 34 year old mother of two was severely wounded in the head while trying to prevent a thief from stealing her sister’s car. The incident occurred on Thursday December 8, in front of Village Market – a Somali mall located in south Minneapolis. The victim died four days later of injuries sustained from the accident.

Ibrahim and her husband, Ahmed Aden, who was out of the country for business at the time of the incident, co-own clothing store at the mall.

According to eyewitnesses, Ibrahim’s sister, Hawa Hassan, left her car running to warm it up. She soon spotted a young man in the driver seat trying to steal the car. When she rushed to stop him, he drove off, knocking her down to the ground. Her sister, Ibrahim, then rushed to help her out. The suspect hits her down, too. Ibrahim reached out to a cell phone that fell from her, but the suspect, perhaps fearing that she makes an emergency call, drives back crushing her against another vehicle. This second hit was the deadly one, says one eyewitness.

Dozens of family, friends and supporters gathered at the family’s Eden Prairie home on Friday to mourn the lost. Among them were Minneapolis Mayor R.T. Rybak and Police Chief William McManus.

“I miss my beautiful wife” says the victim’s husband, Aden “I need justice as soon as possible”. But that justice may have happened earlier on Friday, when Minneapolis police arrested Keith Allen Bruce, an 18-year-old suspect. Police say that he had juvenile warrants that included, among other things, one for auto theft.  Police especially give credit to tips received from members of the Somali community in identifying the suspect.

Despite the tragic shock, Mr. Aden is turning his loss into an action. He has agreed to spearhead a new community task force against crime that will be working with Minneapolis police.

Family members demanded that Ibrahim’s body turned to them the nigh of her death. But hospital officials were already planning an autopsy, since she died of hit-and-run and State law requires that all unnatural deaths be reported at the Medical Examiner’s office.

Autopsy is not a common practice in and may be in odds with an Islamic decree, some Somalis believe. But other Islamic scholars have allowed an autopsy so long it produces credible evidence against suspects.