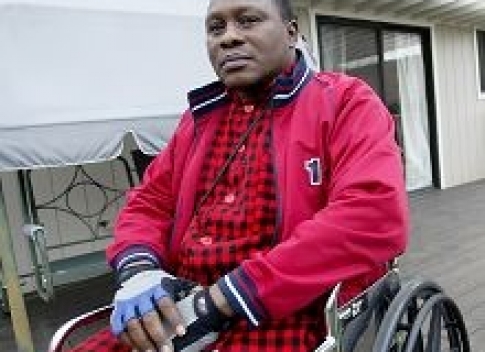 A debilitating injury may have left Kenyan boxing legend Dick “Tiger” Murunga on a wheelchair, but it has not stopped him from fighting.

Only this time he is fighting for the rights of people with disabilities in . And, he intends to punch his message all the way to the United States Congress, the United Nations and various international organizations.

Murunga, a long time professional boxer who came to fame at 17 when he won a bronze medal in the 1972 Olympics in Munich, is in the to raise money for treatment at
StanfordUniversityHospital
. Thorough his charitable organization, Dick Tiger 72 Olympian Hero (DT-72-OSHO International), he is also on a campaign to raise over $10 million to build the International Paraplegic Homecare Center, a 500-bed home in Mombasa, Kenya’s second largest city.

“I want disabled people to be able to do the things other people do,” Murunga says as he settles in the living room of his rented home in
Windsor, Calif.
, where he has been staying since November.

In addition to education and other social services, Murunga says he would like to see disabled people have fun. That is why he has proposed to build the homecare center on 32 acres of beachfront land.

Murunga’s proposed homecare center will be the first of its kind and magnitude in . There are no recent data on the situations of disabled people in the , according to a 2004 report by the International Labor Organization. Statistics from the 1989 census, the latest, show that 0.7 percent of the total Kenyan population (estimated at 21.4 million) was disabled. That number, however, appears to be underestimated considering that many who live in remote areas may be unaccounted for.

The days Murunga has spent on a wheelchair have given him insights into the lives of disabled people, he says. He now knows firsthand how intolerant of the disabled many people. He has lost friends, some of whom he helped during the days he was healthy.

“Some of my friends think it is a curse” to be disabled, he says as he flips through the pages of his brown binder to find a document to show that he has land reserved for the homecare center.

The trouble with Murunga’s health began on one September evening in 2002. He had just finished his daily workout at a gym in Mombasa and was walking to his car. He felt some numbness on his right leg, staggered on the next step and fell. He could not get up. He was, however, with the help of passersby, able to get in his car. He drove but when he got home he could not walk at all.

After several unsuccessful visits to doctors in Nairobi, Murunga left for , where he began receiving treatment at Hae Dang Hospital of Oriental Medicine and Acupuncture in Seoul. Doctors at the hospital found out that, Murunga had ruptured fascia (thin sheaths of fibrous tissue that protect veins) in his knee joints. Murunga’s intense training led to his injuries, he says.

Because of lack of funds, Murunga’s was forced to cut short his hospital stay in
Seoul
to two months, instead of the five as recommended by doctors.

“But I left walking,’ he recalls.

After only a year on his feet, Murunga returned to the wheelchair.

Murunga’s inability to walk has not taken away his cheerfulness. He is clad in a red and black checkered suit that almost looks like a pair of pajamas. But he is quick to point out that it’s ’s newly-adopted national dress. He is always smiling and sometimes giggling as he speaks. He still works out for two hours everyday, an hour in the morning and in the evening. These are some of the things he would like to see other disabled people do, he says.

Although passed the Persons With Disability Act in 2003, Murunga says the government has done less to help people with disability. Dr. Solomon Monyenye, a
University
of
Nairobi
professor, who is on sabbatical in the San Francisco Bay Area, agrees.

“Even though the laws are there in theory, the government doesn’t put them to practice,” Monyenye says.

Monyenye, however, attributed most of the government’s failure to provide disabled people with social services to a poor economy.

Although ’s economy has been recovering since 2002, when a coalition of opposition parties ended the Kenya African National Union’s reign of nearly 40 years, the country is still very poor. has an external debt of over $7 billion.  The annual per capita income is measly $1,200, and 50 percent of the country’s 33 million people live below the poverty line, according to the CIA World Factbook. The country did not qualify for the debt relief granted at the G8 Summit in July to 28 of the world’s poorest countries.

In a country where a 2002 World Health Organization reports that 80 percent of the population does not have any form of healthcare, Monyenye says it will take charitable organizations like Murunga’s to improve the lives of the disabled and poor people in general.

Murunga is no stranger to helping the needy. After a successful professional boxing career that took him to , and , he returned home and founded DT-72-OSHO International to cater for orphaned children. The center is home to more than 200 children.

With the help of Rep.
Lynn
Woolsey (California Congressional District 6) Murunga has made good progress in rallying support for the homecare center.

“We are attempting to have him meet with Sen. [Barrack] Obama,” says Ed Sheffield, a field representative at Woolsey’s office in
Santa Rosa
.

When asked how much money he has raised so far, Murunga politely declines to reveal. He is very close, he says. The World Bank, the
MuhammadAliCenter
and the Don King Foundation have all endorsed his plan and pledged money. As his dream to help the disabled approaches fruition, there is one thing he wants more than anything.

“I want to leave here walking.”