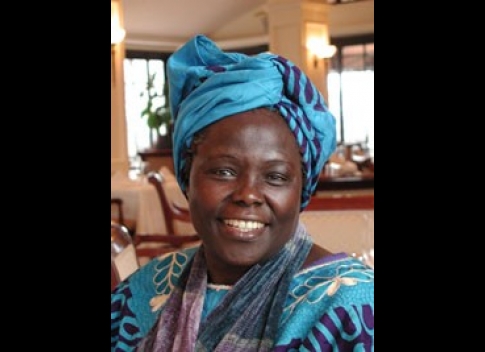 The 11th annual Nobel Peace Prize Festival will be held at Augsburg College in Minneapolis on Monday, March 13 from 11:00 a.m.-1:30 p.m. and will honor 2004 Nobel Peace Prize Laureate Wangari Maathai.  The Norwegian Nobel Institute selected Professor Maathai from Kenya for her contribution to sustainable development, democracy, and peace.  She is also founder of the Greenbelt Movement.  This organization is responsible for planting 30 million trees in Kenya over the past 30 years.

The Festival is designed to connect students in grades 1-12 who first study the work of a Nobel Peace Prize recipient; and then create a related interactive exhibit, work of art, or performance to showcase their learning about the life and accomplishments of their adopted Laureate.  The one-day Festival gives students the opportunity to share their projects and presentations with Wangari Maathai and representatives of the Greenbelt Movement, as well as other invited dignitaries and members of the community.

Wangari Maathai is the first African woman to receive the Nobel Peace Prize.  In her acceptance speech in Oslo, Norway she stated: “I would like to call on young people to commit themselves to activities that contribute toward achieving their long-term dreams.  They have the energy and creativity to shape a sustainable future.  To the young people I say: you are a gift to your communities and, indeed, the world.  You are our hope and our future.”

Some of the highlights of the Festival include: African drumming, a traditional Kenyan welcoming ceremony, original songs and dramatic performances, including unicycles.

During the Festival closing ceremony, Wangari Maathai will be presented with a Peace pole.  The message on the Peace pole reads in several languages: “May Peace Prevail on Earth.”

For more information:  www.nobelpeaceprizefestival.org or 612-330-1510

Dr. Maathai will also be the featured speaker during the 18th annual Nobel Peace Prize Forum that will be held March 10-11 at Luther College, Decorah, Iowa.  The 2006 forum, "Striving for Peace: Sustaining the Planet," will focus on threats to peace posed by environmental degradation and on the importance of grassroots development and individual efforts.

Maathai is to address the forum’s opening plenary session.

Dr. Michael Osterholm, director of the Center for Infectious Disease Research and Policy and professor in the School of Public Health, University of Minnesota, Minneapolis, will address the forum’s closing plenary session.  He served as a special advisor to the U.S. Department of Health and Human Services on issues related to bioterrorism and public health preparedness, 2001-2005.

The Nobel Peace Prize Forum is held in cooperation with the Norwegian Nobel Institute and five colleges of the Evangelical Lutheran Church in America (ELCA):  Augsburg College, Minneapolis; Augustana College, Sioux Falls, S.D.; Concordia College, Moorhead, Minn.; Luther College; and St. Olaf College, Northfield, Minn.  It is the Norwegian Nobel Institute’s only such program or academic affiliation outside of Norway.

The five colleges were founded by Norwegian immigrants.  They have sponsored the forum on their campuses since 1989 to recognize Norway’s international peace efforts and to offer the general public opportunities to hear Nobel Peace Prize laureates, diplomats and scholars involved in peacemaking, including, in previous years, Jimmy Carter, Rigoberta Menchu, Oscar Arias Sanchez and Elie Wiesel.

The Rev. Susan R. Briehl, project associate on Education and Formation of People in Faith, Valparaiso University, will preach during a Saturday morning worship service.  Briehl is currently Distinguished Professor of the Art of Ministry, Wartburg Theological Seminary, Dubuque, Iowa, one of eight ELCA seminaries.

Thirty-one seminars will be offered twice on Saturday.  Topics include: "Global Climate Change: The Scientific Basis and Policy Discussion," "The World Bank: Ally or Enemy in the Struggle for Sustainability?" and "Caring for Creation: Doing Agriculture as Conquerors or Citizens."

A peace fair will showcase organizations involved in peacemaking efforts around the world.  An ethnic arts festival will celebrate the global community through music, dance, food and displays.