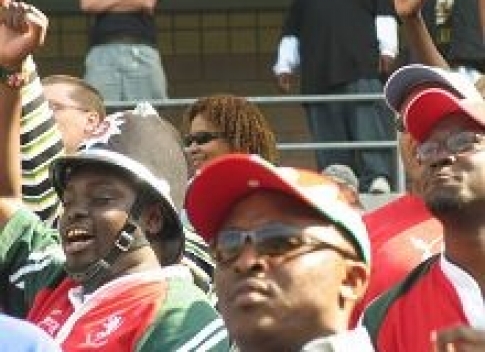 It was the second face-off between the two nations, after a 5-5 tie on the first day of the two-day competition.

Like they did on the Saturday, the Kenyans got on the board first. Dennis Mwanja scored in the second minute followed by a conversion by Lavin Asego to give Kenya a 7-0 lead. Three minutes later, the United States responded with a try by Jason Pye and a successful conversion by Mose Timoteo to tie score.

That, however, would be the last time the United States matched Kenya’s scores. During the rest of the match Kenya—amid chants of “USA sucks” from Kenyan fans— scored 19 points, including two tries by the team captain, Victor Sudi Simiyu, and as many conversions by Asego. The United States only managed to put five more point on the board.

“We had to cut down on our mistakes and make good use of the ball,” Sudi said, referring to several missed tackles that marred the team in its first match against the United States.

The Americans were not surprised by Kenya’s performance in the final.

“They are hard to beat,” said the Eagles’ Todd Clever.

Clever said Kenyan fans may have played a great role in the Kenyan team’s performance. Exhibiting the Kenyan colors of white, red, green and black on their clothing, and waving Kenya flags, Kenyan fans were, by far, the loudest in the tournament.

The annual tournament, which first came to the United States in 2004, features 16 national teams of seven players a side. South Africa and Kenya are the only African countries that have participated. More than 21, 800 rugby fans attended this year’s tournament.

The last day’s performances by both African teams were almost shocking to many. South Africa, which is ranked second in the world by the International Rugby Board, started the first day better than number 38, Kenya. Although they lost their opening match 17-12 to Canada, they came back to whop Mexico 78-0—the biggest shutout of the competition.

“We woke up,” said Phillip Burger, who scored 29 points against the Mexicans.

In contrast, Kenya started the first day with two losses, 26-5 to England and 38-12 to France. The best Kenya could do that day was the tie the United States.

On Sunday, South Africa continued its winning streak by defeating Australia, 26-5. That, though, would be the end of the South Africans’ rally as England handed them a 38-0 blow that prevented them from advancing to the finals. England would proceed to win the tournament’s Cup Finals against Fiji.

The Kenyans started their second day with a loss 21-7 loss to Scotland. But the Kenyan team got its first win of the tournament when it defeated the West Indies, 38-5—a win that propelled Kenya to the Shield finals against the United States.

Check out more pictures from the tournament at our gallery.