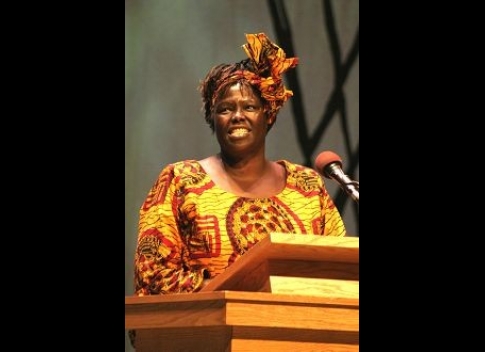 DECORAH, Iowa – Nobel peace prize laureate Dr. Wangari Maathai today said citizens of the world should hold those in power accountable for their actions towards the environment, if we are to preserve the environment for future generations. She gave the example of Americans who despite their government’s refusal to sign the Kyoto treaty have with individual actions have embraced the spirit of the treaty.

Maathai, winner of the 2004 peace prize said good governance is critical to the sustaining of the environment. She told attendees at the conference numbering about 1,500 that it is the little things that they do that make a difference and they do not have to wait for the government to do it for them.

“If left alone, politicians can do almost anything if they can get away with it”, she said. She was one of the keynote speakers along with former Environmental protection Agency (EPA) Secretary Christine Todd Whitman at the 18th annual peace prize forum that began here today.

Dr. Maathai who gave an eloquent speech for about an hour without notes was well received at Luther College where the conference is being held receiving a prolonged standing ovation at the conclusion of her address.

The Green Belt Movement, of which Maathai is the founder is credited with planting more than 30 million trees since its founding three decades ago.