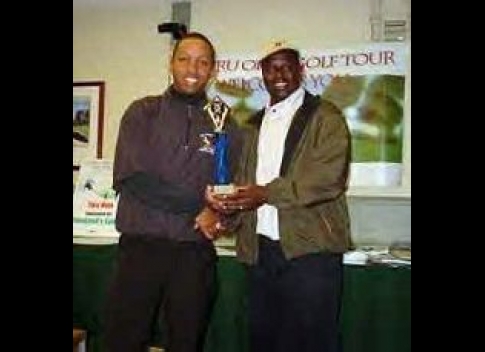 SAN LEANDRO, Calif. March 25— It’s shortly after 11 o ’clock on a sunny Saturday morning. The cold wind blows gently east from the nearby
San FranciscoBay
. It’s not the perfect
California spring weather, but compared to the day before, it’s a beautiful day.

More than 30 golfers are gathered at Monarch Bay Golf Course, located in the marina off the east side of the bay. Suddenly, the winds become stronger and with them come showers of rain. It gets colder.

A quick survey of the golf course by a worker reveals that the fairways in the first two holes are flooded, a result of a storm that descended on the Bay Area on Friday evening and most of the night.

Any group of friends gathered for a game of golf would probably postpone it if the course was flooded and every attempt to drive the ball to the right direction was frustrated by rain and strong winds. But the men and women of Uhuru Open Golf Tour are not ordinary friends. Most of them are from California, but there are a few who have come from as far away as Illinois and Kansas . They are not going to let bad weather stand in the way of carrying on their mission.  The friends are brought together by a desire to eradicate poverty through education. They are here to raise funds to award scholarships to poor African children.

With many African governments unable to provide academic financial aid to the children of their poorest citizens, many Africans abroad are taking matters into their own hands. Africans are increasingly forming non-profit organizations to pay for the education of high-achieving students whose parents are poor. “Governments have lots of things to do,” says James Gachu, Uhuru Open’s tournament director. “If we wait for the government, we’ll never get things done.”

Africa has some of the poorest countries in the world. Of the 18 countries whose $40 billion debt the world’s richest countries forgave last year at the G8 Summit, 14 are from
Africa
.

Founded six years ago, Uhuru Open provides financial assistance to children from the slums of Nairobi , according to Kaburi Kariuki, the organization’s executive director. Every year Uhuru holds a series of golf tournaments across the . Each player pays $70 to reserve a spot in the tournament. At the end of each tournament the group raises money through a raffle and auctioning wines, Kenyan beer and Uhuru Open golf wear.

Currently, 54 Kenyan students benefit from Uhuru scholarships and the organization is planning to expand to other African countries due to the tournament’s increasing international aspect, Kariuki says.

“What you are doing is commendable,” Kenyan Consul General M. Nyambura Kamau tells the golfers and volunteers after a group photo. “If each one of us takes a child or two, we’ll do a lot.”

Kariuki, the executive director, informs the golfers that the tournament will adhere to USGA (United States Golf Association) golf rules. Off to the course they go.

The golfers start in groups of four. It has stopped raining but it’s still windy. Tony Gathungu of
Dublin, Calif.
is the first one to tee off. Dressed in blue jeans, a blue golf shirt with thin white horizontal stripes, a navy blue Nike cap and white shoes, Gathungu steps to the ball, swings and drives it straight to the middle of the fairway, defying the gusty wind. He seems happy with the shot.

One by one, the groups of golfers navigate through mud and bad weather as a small red pump connected to a green hose sucks floodwater from the driveways of the golf course. Halfway through the tournament, their perseverance pays. The weather lets up and they are able to finish the tournament, with Thomas Kanyingi of
Lenexa, Kan.
as the tournament champion.

Gachu, the tournament director, can’t immediately provide the amount of money the group raised today, but he says they sold everything that they intended to.

Visit the Picture Gallery for images from the tournament.