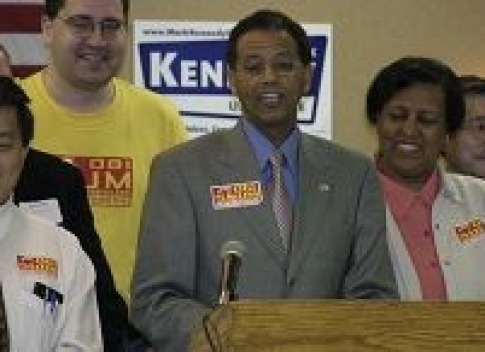 Republicans in Minnesota’s Fourth Congressional District made history on May 20 when they endorsed Obi Sium to run for the seat currently held by three-term Democrat Betty McCollum. Recently, Democrats in Minnesota’s Fifth Congressional District endorsed Keith Ellison to run for Congress. Like Mr. Sium, Mr. Ellison is Black. If they both get elected, they will be the first Black Congressmen to be elected in Minnesota history.

Mr. Sium is a hydrologist for the Minnesota Department of Natural Resources. He immigrated to the United States 32 years ago in search of a better life. He has held many positions with the state, including Floodplain Management Program, Water Resources Engineer and Research Assistant. He became a US citizen in 1982.

The endorsement took place during the 4th District convention held at the Kelly Inn Hotel in St. Paul. Campaign posters lavishly decorated the convention site. The delegates and alternates were in high spirit for the convention. Each one was wearing his/her candidate’s button or sticker.  A few stickers read: “Obi for a Better Tomorrow!”, “Obi Sium for U.S. Congress”, “Dave Sina for Congress”. Dave Sina was the challenger to Mr. Sium for the delegate endorsement.

Prior to the election, the two candidates were given fifteen minutes to address the audience. The first to take the floor was Mr. Obi Sium, an emigrant from Eritrea Mr. Sium approached the podium with his wife, Abeba, and few of his supporters.

He promised to “say know to the growth and spending of big government, putting the economic safety net of American families first!”

He noted: “I will work hard to make health care insurance affordable, putting the welfare of American families first!”

Obi also said he will “champion to improve K-12 education which is of paramount importance in order to ensure our national security.”

He emphasized he would “help bring about change in the attitude of African nations toward the United States.”

Obi concluded: “I pledge to you and to the citizens of the 4th District in particular and the nation in general that I will work hard to defend the values that made America great and the ideals of freedom and individual liberties in the halls of Congress.”

Next to take the stage was Mr. Dave Sina, a former highway construction business owner who has lived in Shoreview for 47 years.

Mr. Sina said he would support Pro Life and Marriage Amendment – the union of 1 man and 1 woman. Mr. Sina said his platform included: Constitutional Principles upon which this nation was founded, Judicial Accountability and Judicial Reform, United States needs to remain a strong ally to Israel. Asking the delegates to endorse him, he said he would be committed to the people of his District and would send Betty McCollum, the incumbent Senator into retirement if endorsed.

After counting the ballots, the Search & Nominations Committee declared Obi Sium the winner. The delegates awarded Mr. Sium 72% of the votes.

Other locations his parades took place are City of Mendota, City of Falcon Heights, Shoreview, St. Anthony Village, New Brighton, among others.

Obi has helped in the resettlement of Eritrean and Ethiopian immigrants in the Twin Cities for the past few years. He and his spouse of 35 years, Abeba, have three daughters and one son, all grown.

The Convention approved the 2006 Platform Committee Report which included among other things, creating jobs and economic security, preserving civil rights and educating our children. Others are strengthening families and communities, protecting the public’s safety, strengthening the rule of law, enjoying and protecting our natural resources, making government better, not larger and defending America at home and abroad.