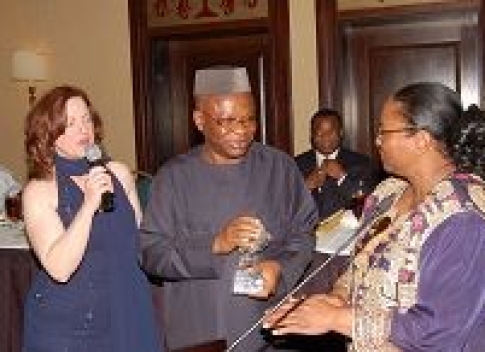 The chairman of the Independent Nigerian Elections Commission, Professor Maurice Iwu, defended the merits of the electronic voting system (EVS) his commission is in the process of implementing in preparation for next year’s presidential elections, considered crucial by the international community.

The commission that Mr. Iwu chairs has come under close scrutiny with opinions about the biometrics system he is implementing divided. Elections in Nigeria have been marred by allegations of rigging in the past and Mr. Iwu sees EVS as the solution to that. However it is his selling the solution as foolproof that has many concerned. Key to the system is the first ever usage of biometrics to thwart fraud that has marred Nigerian elections in the past.

Prof. Iwu was the chief guest at a symposium titled “Strengthening The Nigerian Democracy: The Challenges of 2007 Elections” held at the end of April in Newark, New Jersey organized by The Institute for Advancement of Democracy (TIAD) and the International Leadership Institute (ILI).

Prof. Iwu told the symposium that key to the use of EVS is the updating of the Electronics Voters Register. He said once updating of the register is complete, the commission will in the future only need to update it and not embark on a whole new registration of voters exercise. He said Nigeria will thus have a ‘permanent register” that will be “upgraded at relevant times”. Use of biometrics will thwart multiple registrations of voters.

The chairman pleaded for his commission to be given a chance and not to be dismissed outright. He said his commission will prove the cynics wrong and that “INEC will conduct a successful election, free of manipulations and fraud”. He said most of the concerns on EVS are driven in part by the Florida experience and the resulting debate on how the US can institute versions of EVS. He said as opposed to many of the solutions proposed by voting administrators in the US, among them not having a printout of who the voter voted for – hence a paper trail, INEC’s EVS solution will have a paper trail.

Prof. Iwu also put to rest fears from symposium participants that unreliable electricity supply in his country will hamper usage of EVS. He said the EVS machines will use cell batteries.

On why Nigerians abroad cannot vote, Mr. Iwu said that was a constitutional matter that his commission has no authority over. Was the constitution to be changed, his commission will then be ready to arrange for Nigerians in the Diaspora to vote. He said however, one has to be cognizant of the logistical challenges that voting abroad presents but can be accomplished.

Professor Attahiru Jega, the symposium’s keynote speaker, said contrary to what many think “there is no democracy in Nigeria” but rather the upcoming elections in 2007 is the process of strengthening the process of democracy. Professor Jega is the Vice-chancellor of Bayero University in Kano, Nigeria. He said Nigerian society has a highly militarized “psyche” because of many years of military rule. This psyche also affects the political class which makes them not to work hard enough to democratize. This is manifested by the lack of interest to make sure that INEC is not well funded as its success will affect the political class’s interests.

During an interview in the weekly “Talking Drum” current affairs program on African Broadcasting Network (ABN-America) hosted by this reporter, Professor Iwu also said he recently formed the Nigerian Electoral Institute in order to provide a more professional approach to elections management in his country. The institute will achieve this by providing courses in electoral studies and training to elections staff in an effort to professionalize them. The institute will also be equipped in the future to provide training to other Electoral Commissions in other countries in Africa.

At an evening gala, TIAD and ILI bestowed the “2006 Honoree of The Year” award on Mr. Iwu. During an address, Mr. Iwu revealed that his commission will invite the International Leadership Institute as election monitors. ILI president, Judge (rtd.) LaJune Lange had earlier offered her organization’s expertise in election monitoring during a panel discussion when the question was put to her.

Also attending the symposium gala was the Honorable Wayne Smith, the mayor of Irvington, New Jersey who enthusiastically presented Mr. Iwu with the keys to Irvington City.

Visit the Picture Gallery for pictures from the symposium.