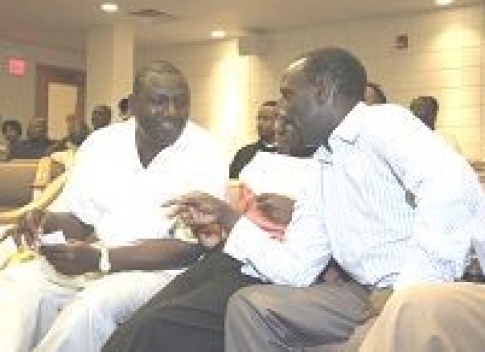 Sometime in 1992, then Kenyan President Daniel Moi under immense pressure from Kenyans and the international community, allowed for multi-partyism. In a grand coalition, the opposition parties in Kenya beat the ruling party, the Kenya African National Union (KANU), in a landslide victory seating the current President Mwai Kibaki. The next presidential and general elections are set for December 2007.

Mr. Moi realized that Kenya had a growing young population and began a successful campaign targeted at the youth that is believed to have won his party, KANU the 1997 general elections. One of these young men was William Ruto, currently Member of Parliament for Eldoret North. In early 2006, Mr. Ruto declared his candidacy for the president of the Republic of Kenya.

In an intense meet the people tour, William Ruto, visited members of the Kenyan community in Minnesota. While there are several candidates to have visited the states, Mr. Ruto is the first to visit the Twin Cities.

In his platform Mr. Ruto identified poverty, unemployment, education and the lack of leadership in Kenya. Mr. Ruto explained that he had been in government for several years and was frustrated by the continual exploitation of resources. He contended that issues raised by founding fathers such as poverty, health and illiteracy were still present in Kenya, albeit forty years later. He promised to lead Kenyans out of this.

Eighty per cent of the Kenyan population live in the rural areas relying completely on agriculture, while eighty-five percent of the poor in Kenya are also found in the rural areas. Mr. Ruto proposed, as he has several times during parliamentary hearings of the National Cereals Board Act, increasing the strategic grain reserves to accommodate the never-ending famine in northern Kenya. With only 4.6% of the current national budget going to agriculture, Mr. Ruto promises that if elected his government would triple that to make sure that Kenya produced enough to feed its people. He argued that no self-respecting government, with an ability to feed its people, would allow them to die of hungry.

Also on his agenda on ending poverty, Mr. Ruto would like to engage more Kenyans in participating the economy of the nation. He spoke of the current government’s commendable effort in involving the citizens in spending funds through the Constitutional Development Fund (CDF).

Unemployment which continues to increase at an alarming rate in Kenya goes hand in hand with education. Mr. Ruto proposed building polytechnics in every village to equip the youth with skills that would allow them to build their nation’s economy while improving their standard of living.

On leadership, Mr Ruto noted that previous Kenyan leadership had done what they could leaving room for a new generation of leaders that would lead Kenya out of its problems. These new leaders, such as himself, would come in with fresh ideas rising above the usual Kenyan tribal politics. While many Kenyans are afraid that their nation is continually divided along ethnic divides, Mr. Ruto claims that this was not the case with the new generation of leaders. He looks forward to working with other politicians in creating an alliance if they find common ground.

A contentious issue in the Kenyan constitution has been the distribution of natural resources. Mr, Ruto acknowledges the need for a formula through which budget allocation in regards to natural resources should be distributed, not just by the whim of parliamentarians. He cites an example in which the current Ministry of Water, with a budget of 1.5 billion Kenyan shillings, gave 1 billion shillings to two districts and the rest was shared by the rest of the country! It is Mr. Ruto’s contention that “when leadership fails, it turns to corruption and tribalism to sustain itself.”

While Mr. Ruto was articulate in declaring his candidacy, many in the audience were left wanting for better solutions. When presented with an opportunity to address the member of parliament, Mr. Andrew Kerosi while impressed with the eloquence of the candidate could not help, but wonder how Mr. Ruto was going to put a mechanism in place that would prevent public funds from ending up in individual pockets.

Others wondered how Mr. Ruto was going to exonerate himself from allegations that he was involved in massive looting of funds during the Youth for Kanu election campaign, allegations that he has continually denied. Mohamed Abdi, a young man interested in running for public office in the next general elections expressed his frustrations in governments that continued to ignore the pastoralists communities in Kenya. He also urged Mr. Ruto and other Kenyan politicians to pay close attention to the problems of Somalia since the effects intimately affect the security in Kenya.

Other issues that participants wanted to see politicians address included: members’s of parliament salary and allowance increases, solutions in creating nationalism in an ethnically divided political arena, economic development, regional integration with Uganda and Tanzania, and an independent electorate commission.

Many Kenyans abroad have kept abreast with political issues back home, and would like to participate in the next general elections. However, the government has been slow in establishing electronic ballots thus allowing for fair remote voting.

Linah Jebii Kilimo, one of the eighteen women members of Parliament, addressed the cultural practices in Kenya that affected the education of women in Kenya. It is important that both men and women are involved in abolishing cultures, such as early marriages, and female circumcision, that are regressive to the positive development of women. Seeing a need to encourage young women to take on leadership positions the female mps have created The Kenyan Women Parliamentary Association which has advocated for women and children rights.

The visit by the members of parliament was hosted by the Open Doors church in Minneapolis. Open Doors has created alliances with local churches in Kenya where they have provided medical care and built orphanages.